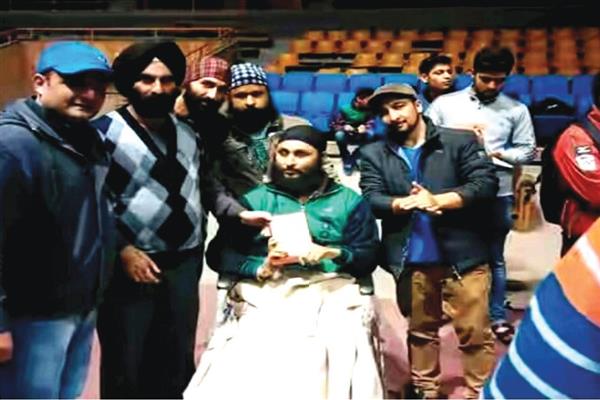 On July 7, 1999, when a 12th standard student Rajender Singh was preparing to sleep after finishing his late-night studies, he slipped. The next thing he remembers is the hospital bed where he found himself surrounded by doctors and family members.

A couple of days later, he came to know that his spinal cord was damaged due to that accident.

“Life had completely changed for me as I was informed that I cannot stand on my own limbs anymore as the accident had made me handicap for the rest of my life,” Rajinder told Rising Kashmir.

Hailing from Peth Gham Gadapora village of Tral in south Kashmir’s Pulwama district, he narrates his ordeal and states that one should never lose hope and should explore options always.

“When I regained my consciousness my whole body was numb, particularly my hands and feet, which I could not move owing to severe spinal cord injury. It seemed that I had lost all my strength and power,” says Rajender while taking a long sigh.

According to Rajinder, his father Amarjeet Singh, who at times was serving in Fire & emergency department as Assistant Sub Inspector (ASI), even took him to the AIIMS  but in vain as doctors declare him bedridden for the rest of his life.

“After I was admitted in AIIMS, It was there that I was informed that I had been given anesthesia to restrain me from moving my hands and feet, as per doctors there, any movement would have caused further damage to my body,” he says.

He adds that after spending 10 days at AIIMS he gradually started getting his consciousness back and he could recognize the people around him.

“I was bedridden for consecutively seven years and during these hard days of my life I had lost all hope to live,” he recalls, adding that the prolonged bedridden period has even left him with bedsores all over his body which aggravated his problem further and was forced to sleep on one side only.

“Initially, I used to lose my consciousness for an hour even at times for more than an hour on a wheelchair but gradually conditions improved,” he says.

Rajindar recalls that some of his friends used to visit him often and would counsel and encourage him not to lose hope. This ultimately sparked hope in him.

“My friends used to boost my confidence by saying that this too shall pass and one day I shall be normal. Besides friends, family support kept me alive, especially my father and mother, who never left me and are supporting me to date,” he says.

Narrating his ordeal he says that at that time he tried to commit suicide many times as he had lost hope to live by being wheelchair-bound for such a long time which he had never thought of.

“After three months of being bedridden, my father brought a wheelchair for me, which clearly indicated that I won’t be able to walk now anymore,” he says.

In the meantime, some of his friends suggested he work as for a society and he started to work as a social activist.

“As I had lost will to live, the idea of social activism seemed boon to me at that time. I found a purpose to live again and I started working as a social activist in 2007 at the individual level,” he asserts.

“ I used to do work for handicapped persons for which I was awarded best social activist award ( Mader-e-Meharban award) in 2014,” he said.

Rajinder says that he shifted to sports activities and then started playing chess where he has bagged the best Para sportsperson award thrice in the years 2014,2015, and 2016.

“Besides I have represented India in the south Asian chess championship in 2016,” he claims.

In times of covid 19, in the year 2020, he claims to have played important role along with Sikh and Muslim brethren in providing food to the affected people who were quarantined at Islamic University Awantipora and Gurdwara.

Rajinder has also brought laurels to the valley by bagging a gold medal for Jammu and Kashmir in the national Boccia Championship.

It has been 22 years now since he has been stuck in a wheelchair due to a spinal cord injury. Despite not being able to walk, he has kept himself active in sports and social activities.

He says that he has been encouraged by a friend who is a sports instructor, to play the Boccia game that would suit him.

Boccia game is a precision ball sport, similar to bocce, and related to bowls and petanque. The sport is contested at local, national and international levels, by athletes with severe physical disabilities.

In the recently held 6th National Para Boccia championship Rajinder Bagged a gold medal for J&K. He bagged gold in the BC5 category. The event was held at Chitkara University, Chandigarh from March 17 to March 20, 2022.

“I am happy to win a gold medal for J&K at the National level. I have been working hard and trying my best to do something for J&K. I finally managed to win gold,” he said.

“For a person, who is unable to walk owing to spinal cord injury, It is not easy to carry on with such activities but I didn’t lose hope and told myself that I can still achieve many things. It is my willpower and dedication that I have been able to do this,” he added.