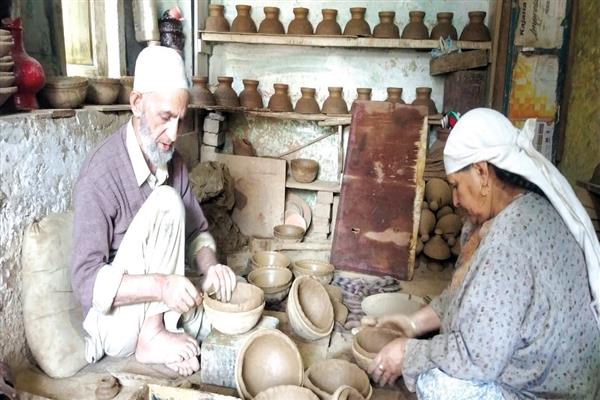 In a congested locality of Khanyar adjacent to famous Dastgeer Sahib Shrine in Srinagar, Haji Ghulam Mohammad Kumar is among the handful of artisans who are still making much famed traditional Rainawari tiles, which are now on verge of extinction.

Like any other places, Kashmir too adapted to new technologies and trends from time to time. It also rendered thousands of artisans, who used earn their livelihood by making these traditional tiles, jobless.

Sitting along with his wife in his modest workshop in Kawa-Mohalla locality of Khanyar, he has a potter's wheel, an oven, and storage space for his work.

Locals say that there was a time when no building or religious place in Kashmir was said to be complete unless it had been decorated with famous Rainawari tiles. These tiles had become part and parcel of Kashmir’s culture but now this artifact is on verge of extinction.

Apart from making traditional Rainawari tiles on demand, Kumar, who himself is matriculated has been making terracotta utensils for nearly five decades.

He had learned the craft from his father when he was a young boy. Many generations of his family were associated with this age-old art. But now, most of the youngsters had abandoned this occupation and shifted to other professions.

Kumar told Rising Kashmir that following the advancement in technology and variety of options in the market, these Rainawari tiles have now becomeobsolete.

“People have stopped using these tiles in their houses, parks, and commercial buildings. Now we work on demand orders only and that keeps this artifact to continue,” he said.

Kumar said there are multiple designs in Rainawari tiles including star tiles, square tiles, and Khatamband tiles. We used to add colors to these tiles to make them attractive and waterproof.

He claims that Rainawari tiles were affordable and long-lasting. Even today, when I saw my work at historical spaces where these tiles were placed, it makes me proud of my work, he said.

“These tiles can be placed on simple mud mixture and around 400 tiles can be laid in a single day, which is very high as compared to machine tiles,” he said.

Kumar says that, from Rainawari to Khanyar shrine, the majority of artisans were associated with this art but now only a few people do it.

“I begged the politicians, rulers of the time to provide me a piece of land anywhere in Kashmir so that I could save this dying art, which is still relevant but they turned deaf ears to my repeated pleas,” he said.

Kumar says since the past two decades, pottery saw so many setbacks, but the government didn’t pay any heed to them.“Our tiles are laid at paths of historic Jamia Masjid Srinagar, Dachigam Guest House, Gupkar residence of former CM Farooq Abdullah, some prominent hotels in Lal Chowk, etc,” he said.

Kumar says if the government will revive this dying art, he will be the first person to volunteer his services for the cause. Most people do not know about these tiles, if this artwork is widely publicized, it can generate employment for many youth in Valley.

During the tenure of former Chief Minister Omar Abdullah’, Kumar displayed his tiles in an exhibition at Ganpatyar. “On the occasion, a woman from Mumbai ordered 400 Rainawari tiles at double price, it boosted my morale,” he said.

Over the past several years, many young artisans came to learn this art from the elderly Kumar.“Two women groups from Mumbai and a few local girls came to learn this dying art. I was very happy that at least someone has any interest in it,” he said.

Kumar says when he will die; he fears that there will be no one who could carry his legacy ahead as his sons have opted also other professions fearing economic losses.

"Most of us gave up on this craft because it won't give you adequate income to sustain. But I had no other way to generate income — through meager — so we continued," Kumar added.

"My children are not interested in this art as they know there are very poor financial returns and the craft itself is on the brink of extinction,” he said.

Kumar still hopes that if the administration provides him a piece of land and he can teach this craft to youngsters to revive this art.

“There is not much profit in this work, only daily expenses can be met. We can't manage to make savings from this meager income and buy land to set up the industry,” he added.

Apart from tiles, Kumar makes Tumbaknaris, a Kashmiri musical drum, earthen pots, flower vases, and other earthenware that are still in demand.

Among his three sons, Bilal Ahmad Kumar is still somehow helping his parents in keeping the traditional art alive. He sells earthen pots made in the market.

Another son, Bashir Ahmad Kumar, who runs a bakery shop on front portion of the workshop says due to lack of demand, this craft is on the verge of extinction. Except for on-demand orders there is hardly anyone who orders tiles today, he said.

“I graduated in 1993 hoping that government will help them in setting up the workshop, but no one helped and that forced us to shift to other professions,” Bashir said.

He says, since the past two decades, the art seems to be on the verge of extinction only because of the adoption of machinery to manufacture modern tiles.

“The demand has decreased as people prefer to buy machine-made tiles which they are getting at a low price but are unaware of its strength and duration,” Bashir added.