Since the emergence of mankind on this planet, man has always tried to understand how the natural system works and what is its place in the fabric of creation 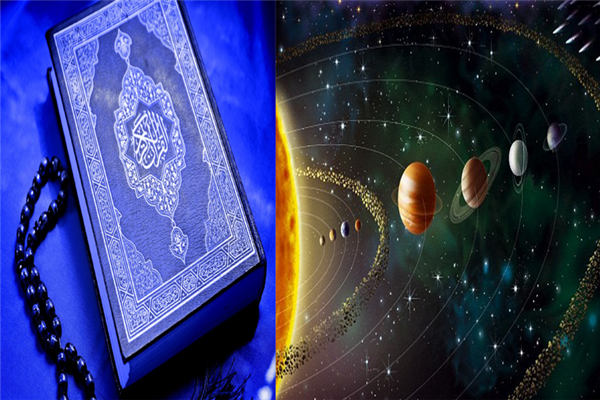 In the contemporary period except a few,the majority of the Muslim scholars agree that Islam and science are compatible with each other. They confidently use modern scientific theories in interpreting the Qur’anic verses. In the modern period, the reality of Islam is becoming clearer by both rational and derivative theories. But many Muslim scholars who have a keen eye on science do not consider it right to resort to scientific theories to prove the authenticity of the Qur’an.

Since the emergence of mankind on this planet, man has always tried to understand how the natural system works and what is its place in the fabric of creation.Divinely organized religions have always shaped the way of life in this search for truth that has spread over centuries and diverse civilizations. Some religions are based on written phrases and sayings, about whom their followers claim that they have received guidance from divine sources. While some other religions depend on the purely human experience.

The Qur’an is a book that is considered to have been revealed entirely by divine means for the wholeof mankind, soit must be in harmony with eternity. It is also important to remember that the Qur’an is neither a scientific book nor philosophy, rather it is‘theBook of Signs’, and its practicability was proved through the living life of Prophet Muhammad (Pbuh). There are more than six thousand verses (signs) in the Qur’an, of which about one thousand discuss nature. It is also clear that the verses of the Qur’an are divided into two parts, Muhkamat (Precise) and Mutashabihat (obscure). The concept of Muhkamat verses is very clear and unambiguous. However, there arepossibilities for reflection on Mutashabihat.

Science keeps changing its position. Therefore, proven and accepted universal facts are used for understanding the Qur’an. The theory of the beginning of the universe or the creation of the universe is now called ‘the Big Bang’ by scientists. This theory was first described by Stephen Hawking in his book, ‘A Brief History of Time’,though the contemplation was continued even before that. How did the universe begin and how will it come to an end? Is there a boundary to the universe? Can time travel backward? In addition, many topics are covered in this book.

In the beginning, according to the Big Bang theory, the whole universe was in one mass. Then there was a great explosion, which resulted in the formation of galaxies. The beginning of the universe was so unique and untouched that the probability of its coming into existence by chance was zero. However, the Qur’an has centuries before proved the Big Bang and the beginning of the universe,“Have those who disbelieved not considered that the heavens and the earth were a joined entity, and We separated them and made from water every living thing” (Al-Qur’an, 21:30)According to Muslim scholars, there are striking similarities between this Quranic verse and the Big Bang. How is it possible that a book that appeared in the Arabian deserts 1400 years ago today contained such an extraordinary scientific fact? This possibility can only be through divine revelation. Scientists agree that before the formation of galaxies in the universe, the whole matter in the universe was in a primitive gaseous state. While this incident in the Qur’an has been described as, “Originator of the heavens and the earth. When He decrees a matter, He only says to it, “Be”, and it is”.(Al-Qur’an, 02:117) Fourteen hundred years before there was no scientific knowledge of the creation of the universe, rather arevelation was the only true source of information, and today modern science is interpreting these signs.

Earlier there was a scientific concept that the atom is the smallest particlebut later this concept was modified and a new theory was developed that atom is also the composition of electrons, protons, and neutrons.  A similar concept was in Jahiliyyah Arabia, wherethe atom was considered the smallest particle. But the Qur’an explicitly refuses to accept this limit“But those who disbelieve say, “The Hour will not come to us.” Say, “Yes, by my Lord, it will surely come to you. [Allah is] the Knower of the unseen.” Not absent from Him is an atom’s weight within the heavens or the earth or [what is] smaller than that or greater, except that it is in a clear register”. (Al-Qur’an, 34:03)It is clear from this that Allah knows every hidden and visible thing. In 1954 C.E., scientists built a 30 km-long underground laboratory on the border of France and Switzerland. It is called ‘CERN Laboratory’, and about 05 billion pounds were spent on its construction. It was established for collaborative research into high-energy particle physics, dedicated to studying the universe's smallest particles (subatomic particles).Scientists have discovered this fact in the 20th century, but the Qur’an refers to 1400 years ago.Such verses help in understanding the Qur’anic concept of the creation of the universe.

In the ancient period, people considered that the earth is flat. So, they were not preferring to travel long distances so as not to fall off the shores. This myth was scientifically eliminated in 1597 C.E.when Sir Francis Drake travelled the world and proved that the earth is not flat but round. However, the Qur’an had fourteen hundred years before said about the round structure of the earth,“Do you not see that Allah causes the night to enter the day and causes the day to enter the night and has subjected the sun and the moon, each running [its course] for a specified term and that Allah, with whatever you do, is Acquainted”. (Al-Qur’an, 31:29)Similarly, this phenomenon is also mentioned in Surah Al-Ra’d, where Allah Almighty has said,“And it is He who spread the earth and placed therein firmly set mountains and rivers; from all of the fruits He made therein two mates; He causes the night to cover the day. Indeed, in that are signs for a people who give thought”.(Al-Qur’an, 13:03). Modern science has now come to prove such things that fruits are the final artifact of reproduction in plants, and they also contain male and female breeds. Therefore, according to some prominent Muslim scholars, modern scientific theories which have been proven globally should be used for the interpretation of the Quranic verses. However, many Muslim scholars do not consider scientific theories to be definitive and conclusive.

The scientific journey is a continuous process and evolving as well. Today’s ideas will change in a few decades and centuries. So, in the modern period,Muslims must develop their level of understanding. The Qur’an is the most valuable treasure for them which is full of the divine signs, and pearls of knowledge. The important task which is necessary to do is to contemplate and perceive the verses of the Qur’an. This will help them to discover new dimensions of knowledge. Islam has inhabited the world with the blessings of knowledge from the very beginning. In the modern world where some egotistic persons have distorted the sourcesof knowledge and have planned to disband the human existence on earth to fulfill their egocentricities, there is an urgent responsibility on Muslims to introduce the world with such aspects of knowledge where the welfare and prosperity of whole humanity are taken into consideration, and there is no such better constitution and guide than the Qur’an to achieve this goal.

(The author is a Senior Researcher of Islamic Studies at the Baba Ghulam Shah Badshah University in Rajouri, Jammu & Kashmir. He can be reached at: Khalid6484@bgsbu.ac.in)