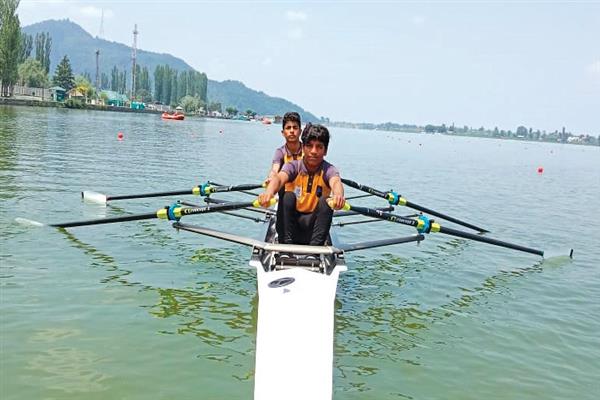 Srinagar, June 24: The day four witnessed the completion of all the qualifying races on Friday in the ongoing 23rd Sub-junior and 5th Inter State Challenger National Rowing Championship being held at Dal Lake near SKICC.

While the national championship was in full swing today, the heats or the qualifying races in the categories were completed on June 24, and the stage has been set for the final day finale.

The final races of the championship in sub-junior and senior categories would be held on June 25 (Saturday) followed by closing ceremony in which prizes would be distributed among the best performers.

The national-level event was inaugurated by Lieutenant Governor J&K, Manoj Sinha in which around 700 water sports players and officials belonging to 25 states, Union Territories from across the country participated and showcased their talent in water sports.

The event is being organised by J&K Rowing and Sculling Association under the auspices of Rowing Federation of India and is being sponsored by J&K Sports Council, Khyber, with active support from J&K Police, Tourism, J&K Adminstration, Health, LAWDA, SKICC, SDRF, NDRF and SMC.

While terming the event as historic, Associate Vice President of RFI, Balaji Maradapa said, “I have visited the World and have taken part in biggest events of Rowing sports.I can without doubt say that Kashmir has got best setting and natural resources for the bigger events like World Rowing Championships.”

"Dal Lake is at par with Switzerland where majority of the Rowing World events are being held," he said.

He said that RFI is contemplating to hold bigger events in J&K and this event has opened Kashmir to World Rowing sport.

"With this event all the athletes, officials, experts of Rowing in India have got first time experience of how it is in Kashmir.Everyone has been left spellbound by Kashmir’s resources which are perfect for top level Rowing competitions.