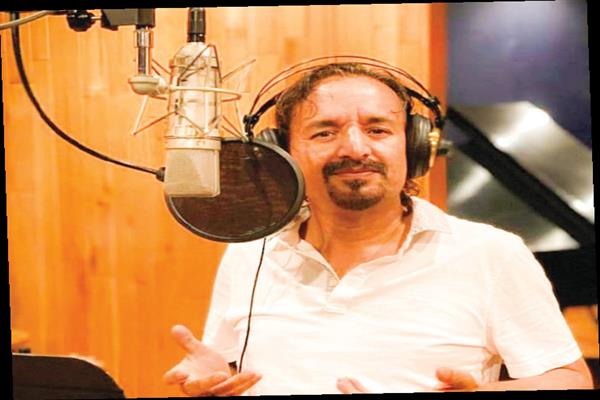 In 1992, he sent his song recording to All India Radio, New Delhi with anticipation to get a B high grade but to his surprise he received A grading. It was a moment of joy for Qaiser Nizami who still cherishes the memory and called it getting double promotion.

The Kashmiri singer and music composer, Qaiser is versatile in many languages. He sings in Awadhi, Purbi, Hindi, Bhojpuri, Persian, Urdu and Kashmiri. Over his performing years, he has performed in various states and has shared stage with many renowned artists like Bollywood singer, composer and musician Jagjit Singh.

Qaiser, being the first Kashmiri, was in the race for the nominations of the prestigious 64th Grammy awards for the song Nazninay (O Beauty). The prestigious award is presented by the US Recording Academy to recognize outstanding achievement in the field of music.

In 2020, he went to the USA, where a concert at the University of North Texas, Denton was scheduled where he was supposed to present Kashmiri poetry and music.

Due to the lockdown, the event was held virtually. In the meantime, India suspended all the international flights and Qaiser was stuck there. Little did he know the lockdown would soon turn into an opportunity for him. A group of musicians comprising Americans and Iranians were also there for the event. One among them, a music composer from Iran, Ehsan Matoori talked to Qaiser and both gelled well together.

Qaiser said, “Ehsan came to me and I sang a song. He was playing Santoor and also dancing to the tunes of my song. After the song was over, he told me that he is friends with a top singer of Iran, Alireza Ghorbani and he told me that he would make a song with both of us.”

During the Covid lockdown, the song was shot and the recordings were exchanged through virtual mode. The song Nazninay (O Beauty) is a bilingual song consisting of two portions- one of Kashmiri gazal Puri Mah of Ibraheem Miskeen sung by Qaisar Nizami and the other is a Farsi poem Beneshin Mara authored by the Iranian poet, Fereydoun Moshiri and is sung by Alireza Ghorbani.

Based on the lyrics of two songs, Nazninay is a story of love, loss and longing. The song is the part of Matoori’s The Voices and Bridges project to explore the musical traditions from different cultures and languages and hopes to bring them closer with an attempt to abridge the different cultures.

“During fearful times, the song was shot. The streets were silent and everybody was living in fear but we had expectations that the song would win the prestigious award keeping in view the circumstances we did the shooting,” he said.

Qaiser said that the song had passed through some tough stages and he is lucky enough that his voice from Kashmir reached the international panel.  After winning the hearts of international fans with the song, he hopes to have a better future.

He said, “Music is a complete subject. When I sincerely ponder over the words of a poet, they speak to me. I look for the depth in the words. The mood of the script strikes me then it doesn’t take me time to bring the script into life.”

Qaisar started his early years of practicing music from his home by his father who was a broadcaster. From 7 years of age, he would hum songs, learn about the high and low pitches from his father who had studied music as a subject and used to play classical flute for hobby. Watching him playing and singing, Qaiser’s interest started growing.

“My father had knowledge about singing. Watching him and learning from him was my favorite childhood memory,” he added.

Dated back to 1988, when he was in school, he was told to sing Urdu ghazal for the program to be broadcasted on the eve of New Year by the then producer of Doordarshan, Rajesh Koul who had heard him singing. Qaiser immediately agreed but was a little nervous due to the lack of confidence. After rehearsing with the Tabla player, Tilak Raj too considered him suitable for the gazal.

Qaiser said, “First time I appeared on Doordarshan as a singer was when I was in 10th class. It was too much for a school student. The listeners after the performance thought I am not a Kashmiri because my dialect and language was perfect as taught by my father. I got huge appreciation for my very first performance.”

In 1998, he had auditioned to the All India Radio before the music maestro Pandit Bhajan Sopori and bagged B class grade.

Having curiosity of learning more and more about music, he started listening to well-known artists from around the world.

“One should know what to listen to and how to learn. You need a teacher for that. Thankfully I had everything available at my home – my father. He was multilingual. He had knowledge about many languages like Persia, Urdu, Hindi, English and I have imbibed all these qualities from him,” he said.

Moving forward in life, his father suggested that he get a teacher for further learning. Once or twice in a year, he and his father would go to Ajmer, Rajasthan. Mohammad Ayoub Khan, a singer from Bareili met them there. Watching Qaiser singing in a fine voice, he was impressed and made him his student.

Qaiser recalled, “I used to prepare and sing before him. Sometimes he would appreciate me and sometimes he would correct me. Many times, he came to Kashmir and stayed with us. Those days were the happiest days to me that he used to teach me every day in the morning and evening. We all need a teacher who can guide us while we are journeying to reach somewhere. I still consider myself a student and I listen to the artists to learn from them.”

Talking about the artists of Kashmir, he said that Kashmir has immense talent but lacks a platform to present it.

He said that many talented artists are sitting at their homes as there is no monitoring who is hired for the events and festivals.

“The mountains and the greenery can be found in other states too but what makes Kashmir beautiful is its art and the artists. The song I sang got international recognition but the people here failed to recognize me and my talent. I have no work in Kashmir and I sometimes feel I have ruined my career. The worthy performing artists should be given a status. The prime programs should be done by the graded artists only,” he said.

Qaiser’s son is pursuing engineering and plays guitar as a hobby. Sometimes, he teaches him. He believes that youth should have proper guidance to learn any art.

“I request the youth to learn the art from a teacher. I am not against any artist. I want each artist to sing but I think a teacher should be consulted for learning.  The world of music is huge - full of tunes, melodies and rhymes. Those young artists who went outside without proper training came back unsuccessful because they had no knowledge and no language. It requires patience and hard work,” he said.