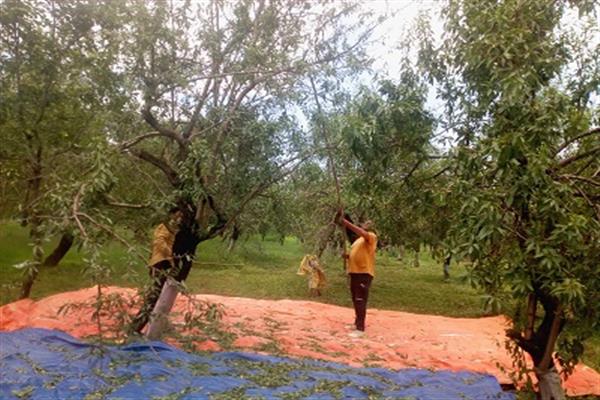 Pulwama, Aug 05: Orchardists from South Kashmir’s Pulwama district have been overwhelmed with joy as they start harvesting a bumper crop of almonds this year.

The Orchardists have been harvesting the ripe crop zealously for the last one week.

Official figures and orchardist accounts reveal that after a dip of two years, the almond yield this season has registered a significant increase.

Javid AhmadParay, an orchardist from Wahibugh, a village around 5 kilometres from district headquarters in Pulwama,  has been harvesting the almond crop on his 20 kannals of land.

“Last year the yield was less, it was around 10 quintals but this year the production will be more than 15 quintals,” he said, adding that they expect to reap good returns from the crop provided demand remains high.

Another orchardist, Gulzar Ahmad Teli, said that their harvest on 2 kannals of land will be around 2 quintals which previously was some kilograms only.

He said that most of the orchardists have recorded good yield this season.

However, he narrated that they get low rates for the produce.

“We request higher authorities of horticulture department for providing market facilities for almond, buyers from different parts of the country should procure the produce from us and not from agents,” he said.

The Almond sector is one of the main income-generating activities in Pulwama spread over more than 3 hundred hectares of land.

Official data reveals that this season’s production would be around 7000 metric tons as compared to the previous year’s yield of 6418 metric tons.

“This year we are expecting a bumper crop,” said Chief Horticulture Officer Pulwama, Javid Ahmad Bhat, adding that such a crop has been witnessed after 2 years of low production.

He said that the production of almonds depends on specific agro-climatic conditions.

“ This year the climate was dry and sunny during almond bloom which resulted in good fruit set,” he said, adding that during the previous two years rain and cold climatic conditions caused damage to blossoms.

He also told that the maximum almond plantation in Kashmir is of seedling origin.

“ Each tree is a variety in itself which creates problems in marketing,” he said, adding that farmers should approach them with a formal representation for direct buying so that they can take up the matter of direct marketing channel with their sister concern, horticulture marketing and planning department.