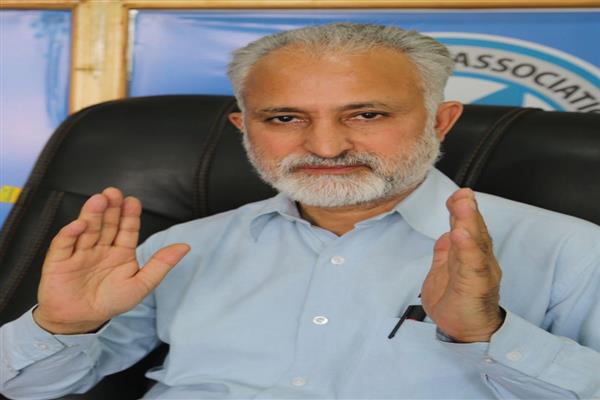 Srinagar: The Private School Association of Jammu and Kashmir (PSAJK) says that the educational institutes shall be allowed to work freely within the legal framework so that they can continue to provide quality education.

RK: As the COVID-19 pandemic has left some learning gaps among the school going students, what has the Private School Association of Jammu and Kashmir (PSAJK) done in this regard?

The private schools in Jammu and Kashmir are playing their limited role only to complement and supplement the students.

RK: What is the reason for degrading quality education in Private Schools?

VAR: In 1951 when the education act was made, the then state of Jammu and Kashmir was the first state that implemented free and compulsory education.

However, as of now, we feel like we are moving backwards instead of strengthening our education sector. There are a lot of learning losses. According to the survey conducted by NISA, there was a learning loss of almost 84 per cent in Jammu and Kashmir. Besides, the literacy rate has been reduced by more than ten per cent.

It is only because, for the past many years, there has not been any consistency among the policies made by the government particularly against the private schools.

Private schools were allowed to hike the tuition fee annually by ten per cent keeping in view the market index which is 14 per cent.

RK: How many private schools do we have in Jammu and Kashmir and what is the employment rate in the sector?

VAR: In Jammu and Kashmir, we have almost 6500 private schools which are being governed by the Government Fee Fixation Committee (GFFC) to regulate their tuition and other charges.

In the private education sector of Jammu and Kashmir, there is an investment of over seventy thousand Crores rupees.

This sector is the highest employer in Jammu and Kashmir wherein at least 1.5 Lakh persons are getting livelihood directly or indirectly.

RK: What are the main issues that private schools are facing in Jammu and Kashmir?

VAR: The inconsistency of the government policies is the main issue especially when it comes to GFFC regulating the tuition fee and other charges, they don’t allow us to charge what we deserve instead keep on asking to summit the issues and files for consideration.

The GFFC can't visit or inspect every school physically to regulate and fix the fee which they deserve to charge. Instead, the owners and the management of those private schools are being humiliated every day in the committee office.

The files that are being submitted by the management of private schools are only being kept in the office of GFFC wherein it seems that their turn of getting inspected would not come before 40 years. Arbitrarily, they are fixing the fee.

Private schools shall be allowed to work freely within the legal framework so that they can continue to provide quality education.

RK: There is a concept that the private schools in Jammu and Kashmir are commercializing education and what are the efforts of the association to streamline the issues of quality of education?

VAR: The core issue of the private schools was to provide compulsory and quality education but because of the obstacle created by the GFFC, has halted the development which ultimately is affecting the quality of education.

This is true that in our society we have underprivileged and both well-to-do families. Some private schools are charging meagre tuition of Rs 150-200 while some charge Rs 2000 or above.

There is no huge difference in terms of providing quality education in both types of schools but when one established school is providing all the facilities to the students, it obviously they will be charging accordingly.

In Jammu and Kashmir, the fee in private schools is very low as compared to other states of India, I feel like we are charging peanuts only.

RK: How are you trying to cope-up the learning losses or academic losses faced by the student's post-outbreak of COVID-19?

VAR: In the past more than two years since the outbreak of COVID-19 in 2020, the schools have remained closed in Jammu and Kashmir, the students have remained far away from the institutions which have resulted in learning gaps.

We know it has taken a mental toll on students and parents. The schools are not only the institutions wherein the students are being provided education but simultaneously it acts as an awareness centre. This time, the reopening of schools is our top priority. We have requested the government to prepone the reopening of schools. We have urged the administration to reopen the schools before February-15.

Our main motive is to regain quality education and as per the New Education Policy (NEP) which is more focused on skill development courses, students are required to be in the schools physically.

As far as the global trends are concerned which focuses more on a hybrid model of education, the management of private schools can't offer such courses while dealing with the financial losses.

RK: Parents of the students studying in private schools have been raising the transportation issues which according to them shall not be paid as their wards have not utilized the services. How do you see the issue?

VAR: There are scores of private schools that have made bus service available for the students and the management of such schools are continuously paying the taxes, interest to the banks and salary of drivers. In this regard, the PSAJK has been requesting the government to address the transportation issue but for more than two years, no logical conclusion has come to the fore.