Protests in Kazakhstan are important and rightfully so 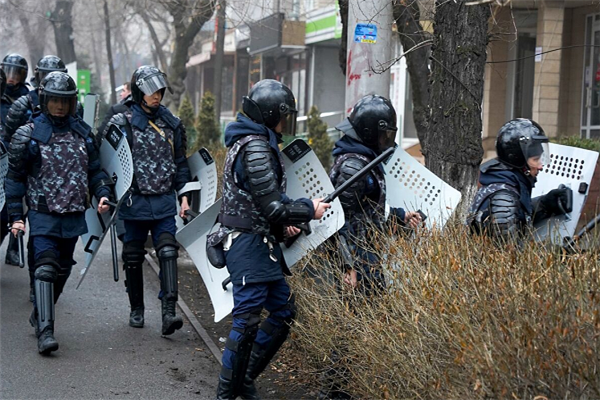 Kazakhstan has witnessed quite a lot of dramatic scenes lately. This relatively stable nation maintained through a strong grip is seeing many of its people getting vocal and displaying their resentment in a manner which has led to many shopping malls, cafes and restaurants being closed, the vandalizing of the city hall of the country’s largest city and the internet being blocked.

As of now, more than twenty protestors have been killed, not to forget that more than fifteen of the security personnel have lost their lives and more than 4000 have been detained. President Kassym Tokayev has denounced the protest as the handiwork of foreign elements, along with asserting that he personally ordered for shoot to kill upon the ‘terrorists’ and the Collective Security Treaty Organisation has sent a 2500 strong peace keeping force to contain the situation, or Russia, as some like to put it that way.

The protests rose over the rise in the prices of fuel but as it is, the grievance is more than that. These demonstrations are a display of the frustration which many Kazakhs feel over a system which has been inept in addressing their concerns. It is a system which has enabled a single party to hold power since its independence and to add with it the lack of opposition is obviously a cause for anger. Economic disparity has also been a strong point, and it is surely the result of a touch of corruption.

These protests aren’t just relevant to Kazakhstan, but to other States of Central Asia also. Throughout these states, one will see corruption, elections failing to meet proper standards and the rule of either a single leader or a party. Presidents or parties winning more than 80% of the popular vote aren’t a novelty for this region. But this mode of ruling is unsustainable and that the people are bound to raise their voice against it, if not today, then tomorrow.

It is a concern which the leaders of Central Asia also take note of and which has led them to introduce at least a blanket of reforms, an example being Uzbekistan whose recent Presidential elections have been termed as an improvement. But the important thing is concrete reform and given that if the enthusiasm and trend of demonstrators in Kazakhstan continues well into the future, it might be compelled to introduce changes.

That is why Russia must be watching them keenly and would desire that the demonstrations be quelled. The structure of power in Russia is a replica of these nations. The rise of the people and the amplifying of their efforts in subversion of the system with its subsequent success would no doubt become an example for many in Russia who are opposed to President Putin.  They would surely glee in finding a way to break the political monopoly in their country, and will attempt to implement this in Russia as well.

In 2020, the Khabarvosk province of Russia witnessed large scale protests by the public on the arrest of their governor on murder charges which they claimed to be backed by a political motivation, since the man was from a different party and thus was a symbol of the feeling of anti-incumbency in the region. At least Governor Sergei Furgal’s popularity in the region said so. Similarly, the popularity of the famed activist and Kremlin critic Alexei Navalny has been strong and while he is currently in prison, it seems unlikely that the voice has died. In fact, it is said that President Putin has more approval ratings in Tajikistan than in Russia! This point also emphasizes that the same effect would also be felt in other Central Asian nations too, since they all live over the same model which if broken form one corner, will crumble as a whole.

Another aspect which is of concern regarding the Kazakhstan protests is that their success as whole could also provide a resurrection of Islamist extremism throughout the whole region. Surely general unrest will enable religious radicals to espouse their cause. All the Stans of Central Asia are witnessing a revival of their traditional Islamic cultures. One instance can be the visiting of Mecca by the Tajik President in 2015 who during the previous century was an atheist as a leader of the Communist party. Terrorist groups originating from this region are well known and general unrest would give them a life boon.

This is a matter which makes China anxious. One of their main concerns regarding the situation in Afghanistan was the prevention of spilling of extremism in its neighbourhood which might also affect its restive Xinjiang province where it is known to control the Muslim population with a strong nationalist grip, denounced as genocide by the West. Otherwise too, the rising share of popular voice in Central Asia is an anathema for Beijing, since a substantial proportion of the people of Central Asia have a negative opinion of China, which is driven by its treatment of Muslims as well as the perceiving of the investments under the Belt and Road Initiative fueling corruption in their own countries. A survey in 2019 showed that more than 60% of Kazakhs believed that China was a threat to their country. However, Beijing at present remains a valued partner of the Stans, rather as an economic arm, complementing Moscow which provides them military assistance.

It may also be asked that what the situation in Kazakhstan means for the west. It is clearly not much substantial. There is no concrete sign that indicates that a rupture in the power structure would tilt these countries automatically towards the West. An adoration of the West among the general population is a result of its impact on popular culture, which in Central Asia is heavily tilted towards Russia, though there are economic agreements between Kazakhstan and Western countries. For example, the United Kingdom was the third largest investor in the country in 2013. But strategically, all the Central Asian states are a part of alliances and organizations engineered by Russia and China. Whatever military relationship some among them had with the US and NATO, it was eroded with the withdrawal in August last year. Economic relationship in the region isn’t a claim to a serious presence. Perhaps the West could make a foothold if a large scale revamp occurs which shall involve its arch rivals also.