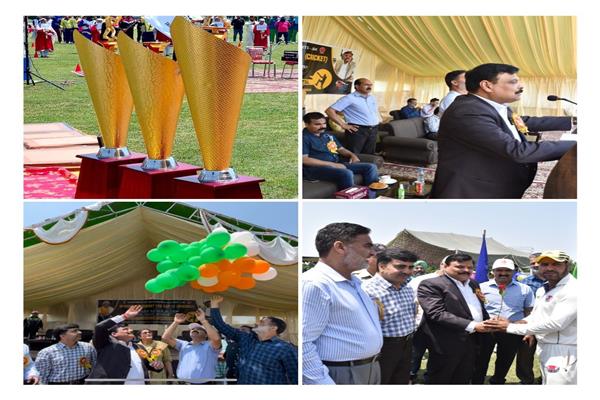 While congratulating Department for organizing sports tournaments for J&K youths especially students (players) Alok Kumar on the occasion hoped that the young boys and girls from Union Territory of J&K will take their sports talent to the next level.

"By grabbing maximum benefits from such type of sports tournaments by ensuring their active participation in the coaching camps and the tournaments organized by the Department from time to time," he said.

Kumar, on the occasion assured to young sports enthusiasts that they not only would be  helped , boosted and even encouraged at every level for doing better in the game of their choice.

“To infuse a sense of competition and make these sports competitions more interesting and full of excitement, the YS&S Department is giving away cash prizes of Rs. 50 thousand, Rs. 30 thousand and Rs 20 thousand for first ,second and third positions  under YSS Cup-21 respectively” official revealed.

Girls Higher Secondary School Kothibagh students presented a colorful and cultural program while the artists of Malangs Band mesmerized the whole audience while  receiving huge applause from the dignitaries as well as young players for their performances on the occasion.

Joint Director Kashmir, YS&S Bashir Ahmed earlier in his welcome address provided details pertaining to the cricket tournament said that district teams from 19 districts of the J&K UT are taking part in this sports extravaganza.

Official further revealed  that around 270 student players are taking part in the six-day - long cricket tourney in which more than 200 YSS officials have been deputed for the successful conduct of the YSS Cup Cricket.

Bashir Ahmed, while counting the benefits of sports for overall development of a person especially youth and its impact on the eradication of drug abuse stressed upon the young blood to use the most impactful tool of sports for saying no to drugs.

While sharing the overwhelming and encouraging figures of youths participation in sports activities during 2021-22 official revealed that during the previous year more than 10 lakh youths have participated in the sports activities organized by the Department across Jammu and Kashmir.

“Five venues have been selected for the conduct of matches and five lodging centers have been kept ready for accommodating players and officials comfortably.” he added.

Official added that registrations are open for the next edition of YSS Cup-22 and interested teams can get themselves registered from every panchayat in the sports disciplines of Cricket, Volleyball, Kabbadi and Kho-Kho at the concerned Zonal Physical Education Offices.