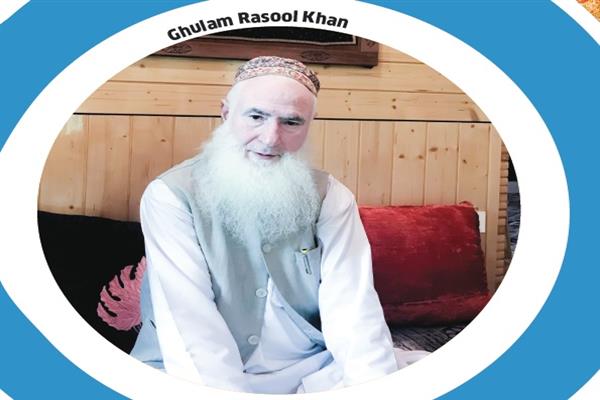 He has spent a lifetime mastering the art of making patchwork Jamawar Shawls. The artisan has picked up the skillset from his ancestors who were known for crafting the best shawls in the valley.

Jamawar refers to a particular type of fabric which is distinguished by its manner of weaving. The patchwork Jamawar shawl is crafted by joining many pashmina patches together in such a way that it gives a uniform look. The Jamawar design is a special floral pattern which resembles the mango fruit.

Around 700 years ago, the sozni Jamawar was made up of 34 pieces. Khan made a Jamawar shawl of 64 pieces which earned him the State award in 2003 from the then Chief Minister of Kashmir, Mufti Mohammad Sayeed.

In 2006 he was honored with the national award for recreating the Jamawar shawl which was made 700 years ago.  In 2012, he was honored with the Shilp Guru Award by the then president, Pranab Mukherjee for the innovation of New Jamawar Shawl made up of 364 pieces.  In 2021, he received the Prestigious Padma Shri award for conserving the oldest form of Kashmiri shawl technique.

“The patchwork Jamawar shawls depicts the legacy, culture and heritage of the region. The serpentine designs and the colors blend together to give this shawl a royal antique look which makes it stand out,” Khan said.

About 600-700 years ago, the history of the Jamawar shawls started from Iran which was then famous for producing the finest shawls. Mir Sayed Ali Hamadani, an Iranian scholar and Muslim saint had brought some 700 finest craftsmen from Iran with an intention to teach various arts and skills to the people of Kashmir.

The craftsmen of Kashmir started taking good interest in the weaving of the Jamawar shawl. “The Iranian realized that it would be more beneficial and profitable in the presence of the Kashmiri craftsmen. Thus with Iranian ideas, technique and patterns, this Jamawar came to the valley,” he said.

The word Jama indicated robe and the word war means yard. Being famous among the royalties all over the world, it is named so the people would buy it in the yards and make a robe out of it. The masterpiece was worn by kings and rulers over their attires in order to add to their royal look.

Khan said that the weavers of the Jamawar shawls were believed to be gifted by god. “The shawls having the timeless design reflects the heritage and legacy. It is also believed that the artisans while weaving a shawl would say a prayer which would give the shawl a spiritual touch to ward off the evil eye,” he said.

The two techniques involved in the making of Jamawar shawls are Kani Jamawar and Sozni Jamawar. Kani Jamawar is prepared with the imagination of a weaver. No blueprints for the designs are made and solely depends upon the creativity and imagination of a weaver. The Sozni Jamawar shawls are made with the needlework embroidery where a single artisan works on a full shawl and hence takes years to complete.

While making the shawls, the color scheme is one of the important things. The hues and tones of the colors of the various patches should complement each other. For the dyeing of the patches, the natural dyes are used.

Khan said, “A craftsman should have a skill of color scheme too. The color combination of the silk threads with which the embroidery is done is also taken into consideration by an artisan.”

Owing to the hardwork and dedication, it took 6 to 7 years for a patchwork Jamawar shawl to be made and the cost goes in lakhs.

“One artisan has to work on the whole shawl so that the style of embroidery remains constant. It’s like writing in a notebook. There will be differences in the embroidery if any other artisan will work on the same shawl. The artisan takes 2 years to do the rich and dense embroidery on the shawl. Then it further takes time to come up as an end product for the customers,” he said.

In the past, he has worked in HMT watch factory for some time. The job with the machines didn’t interest him much and he joined his family business of Kashmir arts which flourished in other states of India too. Those days, the unit run by his father had 60-70 workers. On joining the unit, he was fascinated with the antique shawls which were centuries old and became very fond of making various designs.

“Outside Kashmir, in those days, Marwadi being the elite class, used to afford and wear those shawls. The wear and tear of those shawls was mended by Najumawadi, a community who stitches or fixes the shawls,” he said.

After working for some time, he met with an accident and doctors advised him to take a break from his work. During his resting phase, thinking about the resources with which he could feed his children, he once saw a dream of his father’s unit. Next morning, he told his helper to get a few things: men’s pashmina, drawing tools, needle and started working which with time got improved.

“The patchwork Jamawar shawls got me huge appreciation from the Handicrafts department. But the appreciation wasnot enough for me, I told the authorities that his shawl should reach the common masses so that mass production can happen,” he said.

He said that the craft has a history and has skilled artisans and master craftsmen that need to be uplifted.

“I made a proposal where I made some demands. A space of almost 50 kanals should be allotted where we can set up a workshop for all the crafts be it shawls, papier-mâché etc. The work should be done by the artisans under the supervision of a master which will add quality to the work. A showroom at Delhi where all the items will be stocked and people can see and purchase. Also, a tour for some artisans so that they can go to various places to promote the original Kashmiri crafts,” he said.

He said the three things if done can not only pay way to employment to Kashmir but also create authentic products under the supervision of the leaders who have mastered the craft over the years.

“We have presented the plan before Late APJ Abdul Kalam Azad and many other personalities who appreciated our plan. We want the land for a workshop near the tourist spot where tourists can also come and see what we are doing,” he said.

Talking about the present generation, he said that young men and women are not ready to give their time to this. “The shawls which are supposed to be ready in one year take 5-6 years because everyone works at their home. If we had a workshop, everybody would come and work like people work in the office. Artisans from far off places will be offered hostel facilities and they will be given other benefits too,” he said.

He further said that most of the men have left the job and opted for other professions which is the reason as compared to men, more women folk are associated with the making of the shawls.

“The area was once filled with skilled artisans but now only few families are associated with the craft. This is the work of intense hardwork and patience. The artisans can again get that energy once we get help from the government,” he said.

He is hopeful that soon his plan will take shape and Kashmir arts will make a good comeback.