PM Modi to interact with beneficiaries of various schemes today

Objective is to understand how schemes brought ease of living for citizens and to explore possibility of convergence, saturation 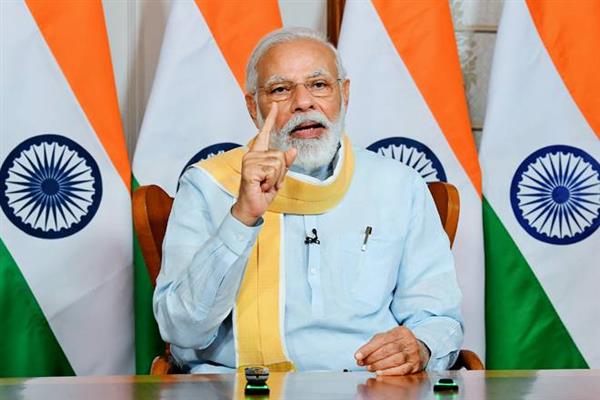 Srinagar, May 30: Celebrating the Azadi Ka Amrit Mahotsav to commemorate the Indian Independence, Prime Minister (PM) Narendra Modi will interact with the beneficiaries of about 16 schemes/progammes spanning nine Ministries/Departments of the Government of India, officials said.

The officials said that the number of beneficiaries of many of the schemes runs in crores and in several cases in tens of crores.

All these schemes address the poorest segments of population; therefore, the event is aptly named as “Garib Kalyan Sammelan”.

The principal objective of the interaction is not only to understand how these schemes have brought about ease of living for the citizens, but also to explore possibility of convergence and saturation.  This will also give an opportunity to assess the citizens’ aspiration for India as it completes 100 years of independence in the year 2047.

The Sammelan is one of the largest ever single-event nationwide interaction wherein Prime Minister will interact with beneficiaries about the impact that the wide-ranging schemes/programmes covering housing, availability of potable water, food, health and nutrition, livelihood and financial inclusion etc., have had on their lives.

Jammu Kashmir UT is proud to be a part of this August event and has made all the necessary arrangements for the programme to be held at SKICC, Srinagar from 10 A.M. onwards.

The event will be presided over by the Lieutenant Governor, Manoj Sinha and also attended by the Chief Secretary, Dr. Arun Kumar Mehta; Commissioner/Secretary, Rural Development, Mandeep Kaur, PRIs and beneficiaries. The State level event will be linked with the National event at 11.00 A.M. when Hon’ble Prime Minister will be live from Shimla interacting with the beneficiaries with the country.

The national Sammelan will be telecast live through Doordarshan in its national and regional channels.  Provisions have also been made to webcast the national programme through MyGov for which people need to register themselves.  It can also be viewed through other social media channels viz., YouTube, Facebook, Twitter, Instagram etc.

It is expected that this interaction will not only highlight the people-centric approach of these schemes leading to ease of living of citizens but will also enlighten the Government on the aspirations of the people and ensure that no one is left behind in the nation’s march to progress.