Places of solace and serenity 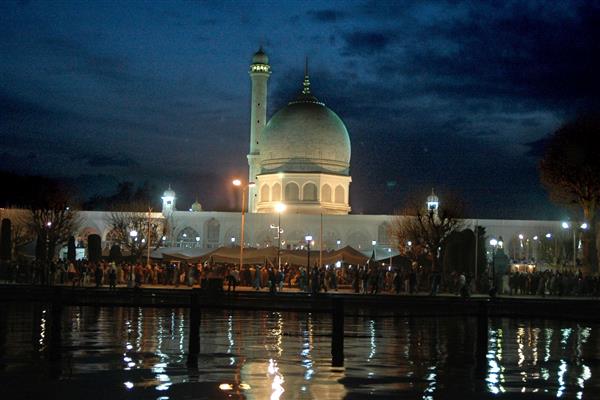 Muslims around the world are marking Ramadan — a holy month of fasting during which people abstain from food, drinks, and other pleasures from pre-dawn to sunset.

Places of worship remain decorated throughout the month; Masjids and Shrines become crowded with the devotees. Taraweeh (night prayers), a special Ramadan prayer is offered in which people hear the long recitation of the Holy Quran. People who do not usually pray five times a day or attend a Masjid put special emphasis on religious activities in Ramadan.

In Kashmir, some of the major attractions in Srinagar city remain abuzz with the devotees, and large gatherings are held at Dargah Hazratbal, Jamia Masjid, and other places in valley.

Dargah Hazratbal Sharif is a revered shrine located in the Hazratbal area of Srinagar which houses the holy relic (Moi-e-Muqqadas) of the last Prophet of Islam Prophet Muhammad (SAW).

The shrine remains abuzz with the worshipers throughout the day and particularly during the sunset when people break their fast.

In the courtyard of Dargah, people sit in long lines on dastarkhwan (table cloths) and are served fruits, dates, juice, and other drinks.

Visitors here make contributions for the food items served at iftaar time, while others volunteer to serve the food.

A similar sight can be witnessed at almost every religious place, including Dargah Shareef. The arrangements are made by both locals and members of the Jammu and Kashmir Wakf Board.

Imam Khateeb Hazratbal Shrine, Dr. Kamaal Farooqi told Rising Kashmir that Ramadan is the training period for Muslims that how people should spend their entire life.

"Ramadan is about nourishing souls with the food they need and that is the remembrance of Allah. Just like we feed our physical bodies with delicious recipes in Ramadhan, we have to feed our souls with delicious duas, dhikr, recitation, obligatory and special prayers," he said.

Dr. Farooqi said the main focus of Ramadan sermons will be about helping each other and praying for communal harmony and peace in Kashmir. The shrine is crowded with the worshipers throughout the month and we pray for peace and prosperity in the entire region," he said.

Dr. Sabazar Gani, a devotee from Achabal Anantnag told Rising Kashmir that Ramadan is a spiritual time for Muslims, and it symbolizes compassion, reflection, and willpower.

"Praying at Dargah gives unique inner peace and spirituality. My parents used to visit here and they always urged me to pray here. It is my luck that in Ramadan, I am getting a chance to visit here," he said.

Dr. Sabzar says during the past two years, due to the Covid-19 pandemic, he and his family could not visit the shrine. Now the situation has changed everything is returning to normalcy and that is good news for devotees coming here, he said.

Outside the revered shrine, People are seen buying household items and foods including dates, dry fruits, fresh fruits, and essential items consumed during the holy month. Where as some prefer to sit on the banks of the famous Dal Lake.

Fasting in Ramadan is one of the five pillars of Islam and people of the faith must follow this cult along with the other pillars- prayer, charity, and Hajj, the pilgrimage to Holy Mecca.

Jamia Masjid in Srinagar is one of the biggest mosques in Kashmir. It is situated in the middle of Nowhattaarea of Srinagar. The foundation for the mosque was laid by Sultan Sikandar Shah Kashmiri, father of Sultan Zainulaabdin (Budshah), a ruler of Kashmir in 1398 AD, and its construction was completed in 1402.

The Masjid was rebuilt by Sultan Hassan Shah, the grandson of Sultan Zain-ul-Abidin, and it was finally so shaped by Ibrahim and Ahmad Magre.

People from different areas visit Jamia in Ramadan to pray, rest, and all in finding inner peace. Each day soon after the Zuhr (afternoon) prayers, Jamia turns into a societal hub. Friends and family members sit together on the lawn and deliberate on whatever topic is in their minds and spend their free time.

It can accommodate more than 33,333 people for prayers at one time. There is a square garden in the middle and the mosque is surrounded by wide lanes on all four sides.

It got ruined three times in a fire and was reconstructed every time. The last restoration was carried out during the rule of Maharaja Pratap Singh.

On special occasions like the last Friday in the fasting month of Ramadan, hundreds of thousands of faithful pray in the mosque, filling its neighborhood's winding lanes and roads.

The architecture of Jama Masjid has the influence of the Indo-Saracenic style.  A magnificent courtyard with 370 wooden pillars and there are three entrance gates on the north, south, and eastern sides of Jama Masjid with three turrets standing on the tall columns of deodar wood.

Irfan Ahmad Ganai, a local from Trahpoo Anantnag, who had come along with his friends to offer Friday prayers at Jamia Masjid said that Ramadan is the best month to visit this historical place.

"I often visit this place, it is a peaceful atmosphere here and one cannot find such architecture in entire Kashmir. It is a unique feeling here and cannot explain its spirituality," he said.

Rouf Ahmad, a local says he often comes to Jamia Masjid during Ramadan. “It is central Masjid where our ancestors and spiritual leaders have prayed for decades. We love this place," he said.

Every year, thousands of people gather on the last Friday of the holy month of Ramadan to offer prayers. The Masjid is being managed by Anjuman-e-Auqaf, a private enterprise and it was constituted in 1975.

Inside the historic Jamia Masjid compound, there is a vendor market known for its clothes, crockery, utensils, and suit laces.

Ghulam Mohammad, 45 a local shopkeeper told Rising Kashmir that during Ramadan, the rush of people is more as compared to normal days. “People mostly from other districts of Kashmir valley are our customers who often visit Jamia Masjid for Friday prayers,' he said.

"During Ramadan, it is the best place to visit, it is surrounded by historical markets," he said.

The water pond in the middle of this 13th-century mosque is used for ablution by the devotees.

Mohammad Ashraf, 61, a resident of Hawal has been volunteering at iftaar time during Ramadan for the last several years in Jama Masjid. He says, "Every day we prepare iftaar packets for 100-200 people.

"Each day hundreds of devotees break their fasts with the food served free during iftaar. One finds solace at Jamia and there is something different here as compared other places, he said.

Ashraf said the month of Ramadan is an opportunity for exercising self-evaluation and self-education to develop self-discipline, self-control, self-restraint, purify soul and change toward God-consciousness (piety).

Earlier in March this year, thousands of devotees turned up to offer Friday prayers at the historical Jamia Masjid in Srinagar as it was opened to the public after a gap of 30 weeks. It had been closed in April 2021 in wake of the Covid19 pandemic.