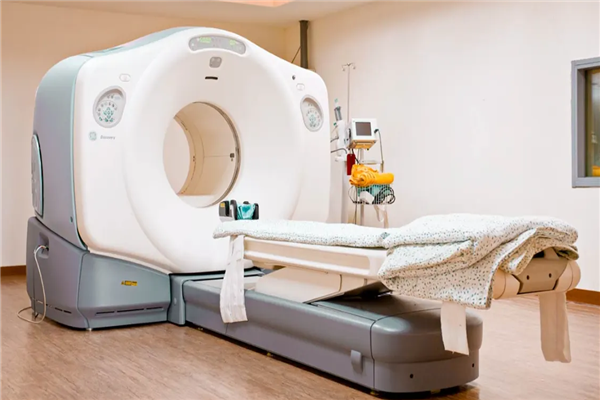 In modern day practice of oncology PET-CT has emerged as a game changer in management of cancer. It constitutes major advancement in the initial diagnosis, evaluation, treatment, prognosis, surveillance and relapse throughout the course of the disease by adding precision of anatomical imaging to functional imaging. PET-CT is an acronym for Positron Emission Tomography – Computed Tomography which is nuclear medicine equipment that houses a PET scanner and a CT scanner, to acquire multiple sequential views to create 3D images of body. This modality provides a hybrid image formed by fusion of functional image of PET and anatomical image of CT.

Principle of PET is based on ADC (annihilation coincidence detection) in which two photons of 511 Kev energy are emitted in 180 degree direction and are detected by an array of specialised ring of detectors in a PET camera. The basis of PET imaging is the labelling of small biologically important molecules such as sugars, amino-acids, nucleic acids, receptor binding ligands, water or even molecular oxygen with positron emitting radionuclide’s. Extensive research has led to the development of different types of radionuclide’s for PET imaging in which F18-FDG is most commonly used and is aptly called ‘molecule of millennium’. Other PET radioisotopes are N-13, O-18, Ga-68, C-13 etc which have varied clinical implications. Most of these isotopes have very short half lives (T1/2), requiring a cyclotron to be in close proximity for their production and clinical application. When these radioisotopes undergo radioactive decay, their position is detected by PET scanner which forms the functional image and this image is fused with the anatomical image acquired by the CT to get a hybrid image for accurate localization of the disease.

F-18 FDG has emerged as powerful imaging tool for detection and evaluation of various cancers. F-18 is a cyclotron produced radioisotope. F18-FDG is produced by nucleophilic reaction after proton irradiation of 0-18 H2O. It is glucose analog with half life of 109.7 minutes.In malignant cells, increased expression of membrane glucose transporters (e.g., glut-1) results in higher levels of intracellular glucose. Within these cells, the levels of hexokinase (hexokinase II) activity is also increased, phosphorylating glucose, which then moves through the glycolysis pathway. F-18 FDG is taken into the cell and phosphorylated by the same mechanisms as glucose, but F-18 FDG cannot be metabolized further. In addition, due to the lower levels of glucose-6-phosphatase in cancer cells, FDG remains effectively trapped because phosphorylated FDG cannot diffuse back across the membrane.

• Evaluating the extent of disease in known malignancies (staging/restaging).

• Detecting tumour recurrence, in the presence of elevated tumour markers but no clinical or morphological evidence of disease.

• Diagnosis for an unknown primary when metastatic disease is the first clinical presentation.

Glucose in our body competes with F-18 FDG for uptake; the patient’s glucose level should be checked before injecting F-18 FDG. The upper-limit cutoff value under 200 mg/dL is generally considered acceptable. Patients fast overnight or for at least 4 to 6 hours before injection and avoid carbohydrates in the meal (or even the day) before injection.

With the advent of improved camera technology, radiopharmaceutical dose has been considerably decreased. Typical administered doses are of the order 7-8 mCi (259-296 Mbq).

Patients should remain completely still and quiet for the uptake period, which is usually 50 to 65 minutes to achieve the optimum target-to-background ratio. Patients are usually imaged in the supine position after bladder voiding, with arms placed above the head.

Most PET/CT studies are performed with intravenous CT contrast, which helps in delineation and identification of normal structures and makes pathology moreconspicuous. Water can be used to distend the stomach and duodenum. Dilute oral or waterequivalent negative oral contrast is also acceptable.

Lesion activity can be described in comparison to contralateral background, blood pool, or liver activity. SUV quantifies the uptake of radiopharmaceutical by the organ.  A region of interest (ROI) is drawn around an area or volume of tissue. The number of photons detected will reflect the actual radiopharmaceutical concentration in the body. This calculation also requires the precise knowledge of the injected activity, determined by subtracting the postinjection residual in the syringe from the known activity initially present and decay-correcting for time.

In general, an SUV greater than 2.5 is considered suspicious for malignancy, although most tumours have an even higher level, and considerable overlap occurs with inflammatory processes.

Other than oncology and F-18 FDG, PET-CT uses other positron emitting tracers to diagnose various abnormalities such as in cardiology, neurology etc.

Cardiac PET scan can assess both blood flow and metabolism of heart.F-18 FDG is a marker of myocardial glucose metabolism and is significant in assessing myocardial viability. Rubidium-82, Nitrogen-13 and Oxygen-15 water are commonly employed for evaluating myocardial perfusion

PET has sprang up as potent tool for in vivo imaging of brain. It provides non-invasive quantification of brain metabolism, receptor binding of various neurotransmitter systems, and alteration in regional blood flow. ). PET imaging has made significant contributions to our understanding of dementia.

The impact of PET radiopharmaceuticals approved for the detection of abnormal beta-amyloid protein deposits (F-18 florbetapir, F-18 flutemetamol, F-18 florbetaben) is being investigated in multicenter trials looking at Alzheimer’s and mild cognitive impairment (MCI). Additional imaging biomarkers are being sought for neuroinflammation and other processes that contribute to neurodegenerative diseases.

Our experience at SKIMS Srinagar, Department of Nuclear Medicine

The department of Nuclear Medicine at SKIMS Srinagar has the distinction of being one of such earliest centres of the country delivering high end patient care to the poor people of J&K. First PET-CT facility in entire J&K was inaugurated at SKIMS Soura, Department Of Nuclear Medicine on 07 January 2018. This facility not only improved the diagnostic accuracy in cancer patients but became a boon for thousands of poor patients of valley, who otherwise had to spend a colossal amount of money for undergoing  PET-CT scan outside the UT.

Facility of PET-CT in SKIMS Srinagar has been a cost efficient approach for management of cancer of the poor people of the valley at their doorstep. The total cost of PET-CT at SKIMS, Srinagar is very economical and has provisions for exemption for people living below poverty line (BPL). Although PET-CT scan in Government and private centres outside the state costs lesser than at SKIMS Srinagar, the additional expenses of travel, boarding and loading makes it relatively a costly affair for poor people to afford. Further reduction in charges for the patients undergoing second and follow up PET-CT scan has been approved by the current administration and will be implemented soon.

F-18 FDG radiopharmaceutical in SKIMS is supplied by F-18 production centre, at New Delhi. The activity loaded by the supplier is 2400mCi but due to exponential decay of radionuclide, 100 mCi is received at the doorstep of SKIMS. With an average dose of 10mCi administered per patient, scan of 10 patients is performed per day. Limited half life of 110 minutes of F-18 FDG, geographical and weather constraints, air traffic delays sometimes result in interruption or very rarely cancellation of the procedures especially in winter, however the dedication and hard work of the staff does not let these impediments of any sort to come in way of quality patient care. The department ensures that every patient is individually contacted by the staff and given the instructions one day prior to scan to avoid any hiccups at the time of scanning.

With ardent hard work and dedication, the department of Nuclear Medicine has performed a total of approx. 3800 PET-CT scan still date which include 2300 males and 1500 females (approx).Non Hodgkin’ and Hodgkin’s Lymphoma together constitutes the bulk of the cases (25%) followed by lung cancer (13%).Other cancers include, Breast cancer, Stomach Cancer, G.I Cancers, Head and Neck Cancers etc.

In near future, SKIMS intends to get the Germanium-68/Gallium-68 generator. Which will be used to image patients with Prostrate and Neuroendocrine tumours with higher sensitivity than F-18 FDG. With the augmentation of trained staff and machines in near future, the department endeavours to start therapeutic procedures like radiation Synovectomy, Lu-177 therapies for PNET tumours and transarterial hepatic embolization for Hepatocellular cancers.