The relationship between the two nations, India and Pakistan, can start afresh only when Pakistan dismantles all terror infrastructure active or passive on the land under its control 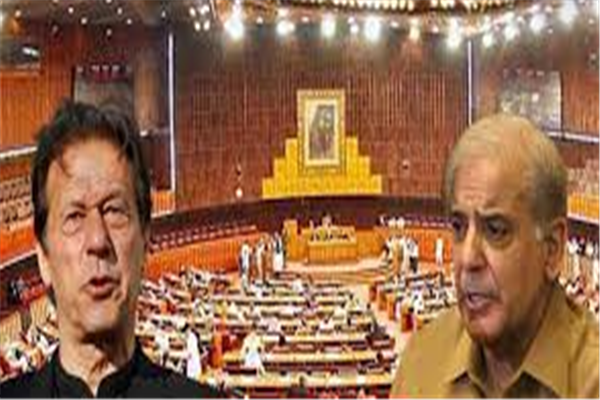 The recent political vicissitudes in Pakistan are clearly reflective of its seven decade old history. It is being oftenly said that no Prime Minister in Pakistan could complete his or her full five-year term all these seven decades of Pakistan's birth and the political developments this time also confirmed the same. Imran Khan's ouster in the voting on no-confidence motion in the National Assembly of Pakistan was engulfed in a long-drawn political melodrama. But the destiny proved the history correct despite usual tricks and political manoeuvres employed by the people in the government there.

The biggest satisfaction or achievement for the democracy of Pakistan this time is invariably the role played by the Supreme Court of Pakistan. Army might have also played its role in the backyard, is a common inference. In its unanimous judgement, the apex court nullified the decision of the Speaker and Dy. Speaker of the house to reject the no-confidence motion moved by the opposition. The bogey of foreign intervention raised by Imran Khan and his party colleagues had no impact on the judges of the Supreme Court. Moreover, the court directed the Speaker of the National Assembly to conduct the voting on the motion of no-confidence in the then government led by Imran Khan. But he (Khan) while fighting the last over of the match preferred to sit in the pavilion than to be on ground to face the last ball of the match. He declared himself 'retired hurt' before the ultimate over.

Imran Khan blamed the US and the other western countries for the developments leading to the topple of government by the opposition in his country. In his speech to the nation, he referred to India's foreign policy and also praised the sovereign character of the policy pursued by India. It was for the first time in Pakistan that while ridiculing the US, the top leader would praise India on a public platform. He even went to the extent to go for full course of friendship with India and also said that the issue of Kashmir was a stumbling block in the relations. However, his opponent in the opposition camp, Shahbaz Sharief, raised the Kashmir bogey in a different context in order to remain relevant in the emerging scenario.

It was only some days before the trust vote that the Chief of the Pakistan Army, General Bajwa also talked about the 'need of improvement of relations with India including resolving all issues including Kashmir'. The new Prime Minister, Shahbaz Sharief, brother of the former PM of Pakistan, Nawaz Sharief and a three-time Chief Minister of Punjab province in Pakistan after assuming the national leadership also referred to Kashmir again. These statements clearly hint that Pakistan's politics, internal and foreign policy and the defence strategy are overwhelmingly impacted by the issue of relations with India and in order to play safe in this regard, the issue of Kashmir is also raised intermittently and consciously.

Pakistan is also conscious of the fact that its misadventures in 1947, 1965, 1971 and 1999 through the conventional wars didn’t achieve any results in its favour so far. In 1971 consequent upon a full fledged war, it lost the east wing of Pakistan permanently with the emergence of Bangladesh as a new nation. The strategy to introduce the element of terrorism initially in Punjab state of India and later in Jammu and Kashmir by Pakistan over the last four decades has brought to the fore devastation, death, destruction and mayhem only on both sides of the LoC. Since cross-border terrorism was/is guided by Pakistan's intent of mind of 'bleeding India by one thousand cuts', however, it knows that it has failed to make any sort of pressure to drag India to a negotiating table on Kashmir through the application of its terror-strategy.

From an Indian point of view, India's current relationship with Pakistan is by and large guided by three postulates, i.e. the Shimla agreement which says that the issue of Jammu and Kashmir is a bilateral issue between India and Pakistan, second, the 1994 Resolution of Parliament of India which directs that the only unresolved issue between India and Pakistan remains that the areas of Jammu & Kashmir under illegal occupation of Pakistan are to be retrieved by India through peaceful means, and the doctrine pursued by India that 'terror and talks won't go together'.

India has also been asking Pakistan consistently that it should realise the promise made by it to India and the world that the land under its control won't be allowed to be used for terror purposes against India. However, its actions did never match its words in the past. While Shahbaz Sharief was taking oath of his new office and addressing the National Assembly of Pakistan, a Pakistani terrorist was engaged in an encounter with the security forces in Kashmir valley around the same time. He got killed in the process which is the destiny of any person who takes up an illegal gun. Those who live by gun also die by gun. That is the obvious result of terrorism anywhere and anytime.

Delivery of sermons and lectures on peace is a common practice of the political leaders. Pakistan politicians are no different, so their rhetoric of peace is not anything new. But in context of Pakistan, the issues of peace have a country specific agenda. These statements are always aimed at India. When this time Pakistan is fighting for its survival and existence as a nation on a variety of fronts like, home policy, democracy, economics, foreign policy and relationship with its army, its references to India now and then speak about one important factor and that is the successful march of India as a nation among the comity of nations.

India is not only a successful democracy in the world but is a de facto leader of the world in many spheres. At a time when Pakistan's leaders were scoffing the US in its national debates and discussions on all available platforms, Indian Prime Minister Modi and the US President Biden were engaged in a virtual meeting over a variety of issues including the Russia-Ukrain war. Only a few days before, Russian President Putin was engaged in a very intimate virtual discussion with the Indian Prime Minister Modi. The import of crude from Russia by India on a heavy discount is another successful story of the relationship with Russia. Pakistan knows that both US and Russia are in a very serious diplomatic, strategic, economic and cultural relationship with India.

Almost all the Islamic countries in the world, barring a couple of nations, have a great friendly relationship with India. There are some exemplary relations as well in this regard, like the relations with UAE, Qatar, Bahrain, Saudi Arabia, Indonesia and the five Central Asian countries. These relationships are independent of India's relationship with Pakistan. While things have started settling down in Pakistan on the political front, leaders and the government are expected to do some introspective exercises about the issue of the failure of Pakistan as a viable state-nation in the world.

The headache of Kashmir, terrorism and bad economic situation have eaten into the roots of Pakistan. They don't allow it to grow as a responsible nation of consequence. There is always an international pressure on Pakistan due to terrorism. Pakistan was forced to take action against some top extremists and terrorists active in its land. But it is not enough. It needs to go for an overhaul of its policy towards India if it really means any sense about peace.

The relationship between the two nations, India and Pakistan, can start afresh only when Pakistan dismantles all terror infrastructure active or passive on the land under its control. It shuns its policy of 'bleeding India by one thousand cuts', and 'hysteria of war with India for one thousand years'. It stops cross border terrorism and denounces terrorism in all its manifestations and forms. Kashmir is a very costly subject for Pakistan and there will be no end of the road for it. It will in fact bleed Pakistan internally and morally if it continues supporting violence and terror in the name of Kashmir.

When Gen. Bajwa wants 'one hundred years future relationship with India', he also needs to convince the political class of Pakistan that enough is enough. India will never shy from any discussion and debate or negotiations on pending issues between India and Pakistan, but will do so only when terrorism is completely disowned and demolished by the state of Pakistan which it earlier considered as an essential asset of its national policy.

Peace will flow from the willingness getting converted into practice on ground. Otherwise, people take it as a simple but compulsive rhetoric. It is time when Pakistan gives a try to peace by its sincere actions on ground convincing both India and the world that it remains sincere and honest to its intent on peace.