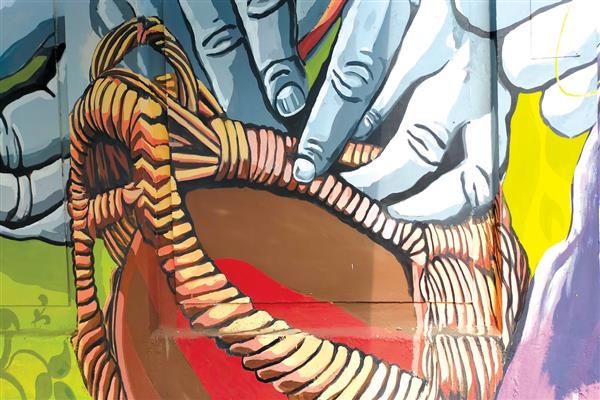 A group of artists under the banner Arts and Life Initiative Foundation (ALIF),are transforming the landscape including hitherto neglected public properties and places with attractive paintings of natural beauty, art and culture.

ALIF, a team of over a dozen professional artists, who are behind this fascinating artwork was registered as a foundation in 2014 and has done a tremendous job in the valley.

Ghazala Fatima is the only female member of the group. Basically from Delhi, the 32-year-old joined the group after she was married to an artist from Tangmarg in 2019.

“I have worked on many projects and wall paintings in order to promote art in Kashmir which is our main motive,” she said.

She said that this artwork is common in Delhi and other states; in Kashmir it is need of the hour to bring out the hidden talent in students.

Fatima an artist, art educator, author of art books, a fashion designer is also a recipient of ICAC award which she received for her at work before joining ALIF.

Over the years, she also got the opportunity to work on wall paintings in Srinagar, Tangmarg, Gulmarg and other places.

Another artist Basharat Bashir Naik who handles the painting part of the group said they are working continuously since 2014.

The 35-year-old an artist said the themes of the paintings revolve around Kashmiri culture, heritage and wildlife. He said it is a great platform for the young and aspiring artists who often struggle for opportunities.

“I and my friend used to discuss street art during our university days but had never thought we would make it in the form of a group,” he said.

Naik, having a master’s degree in painting from Jamia Millia Islamia, explains that the murals have been created in such a way so as to give a three-dimensional effect.

“We have worked in almost every district of Kashmir. Majority of the projects are government financed and approved,” he said.

Naik said he has voluntarily made some paintings at Tangmarg, Bab Reshi Shrine, Chanpora Srinagar and other places. Naik said they also make in-house paintings that are later taken to different exhibitions and artist camps to showcase them.

“Through our paintings people also get involved in street art,” he said.

Another member of the group is Nadeem Ahmad a resident of Tangmarg started working with the group in 2016 and had been painting surroundings at different places.

The 30-year-old Nadeem works with the group as an artist who work on different projects to make the surroundings to look attractive. “I started working very keenly. It is an opportunity for artists to work together for such an amazing project,” he said.

The group recently painted the flyover of Srinagar’s Rambagh area the paintings of which are being hailed widely by people and on social media as well.

Nadeem, who has Master’s degree in painting said, “I also painted surroundings at Gulmarg which were mostly related to wild animals and endangered species. It was a good project.”

Recently, ALIF also worked a project on Smart City Srinagar, in Budgam on culture and tradition and in Bandipora on fisheries and natural beauty.

Arif Bashir, 34, the founder ALIF said young artists, trained from institutes like Shantiniketan and Jamia Millia Islamia, became a part of ALIF to do some good work in the Valley.

“The scope for artists is very limited in Kashmir and you do not even have spaces for conducting workshops or exhibition. We wanted to create our own space,” he said.

In 2017, the group worked for project for the famed ski-resort of Gulmarg with attractive murals on neglected public properties with paintings of wildlife and endangered animals.

If you drive uphill from Tangmarg to Gulmarg, you will come across large, colourful murals splashed across walls depicting the way of life in the Valley.

After the group’s first work drew attention, it struck a deal of 10 such mural projects in Tangmarg and surrounding areas with the Tourism Department.

Apart from murals, ALIF is also associated with the Institute of Music & Fine Arts University of Kashmir and has collaborated with educational institutes and NGOs and take art to villages in Kashmir, while encouraging young people to take it up as a vocation.

Apart from doing projects, ALIF group also organized workshops in schools in order to encourage students who are interested in making their career in painting.

“It continued till Covid-19. After that we could not do it due to the restrictions, lockdown and close of schools. We were constantly engaging students of schools,” he said, adding young artists from different parts of valley continue to join the group.

Bashir said sometimes they would invite students and join them at their space in Tangmarg where the ALIF group has its art residency.

“Mostly we used to go to schools. It was motivated by the fact that this was going to be one of the means of expression for students. In school there are many students who are interested in art but they do not express and restrict it to their hobby,” he said.

Another motive of the group, he said, was to understand the various concerns and issues confronting the young students by going to them.

“You don’t t have to speak to them because they might not have the vocabulary to make you understand. But when they would draw something that would give an insight in their thinking and capability. What do they draw and how do they draw, that is also important,” he said.

Bashir said during the programs in schools, which were voluntary, they came across good number of young students who were very good in arts and they tried to bring colour to their lives.