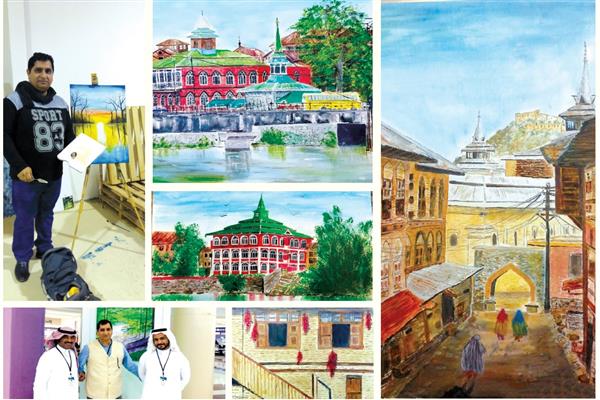 It was in 2012, when he made his first painting. After getting appreciation from his colleagues, he thought of giving his lost passion a new life. Iftekhar A Wani, a self -taught artist from Kashmir, had been working in the corporate sector in Saudi Arabia. Having had a strong passion for painting since childhood, it was lost somewhere due to his busy work schedule and family engagements.

Recalling his childhood days in Sopore, he would see his father working on drawings who was a civil engineer by profession but he was inspired by one of the famous cartoonists of the valley, BAB. He said, “His cartoons would get published in the daily newspaper and I would draw the same in my drawing book. This is how I started learning as there was no art teacher available back then in Sopore so I had to learn it all by myself.”

Having pursued MBA in Bangalore, his job took him to various cities of India and Middle East countries of Saudi Arabia, Dubai and Bahrain. Being fond of art, he often visited art galleries, exhibitions and events of these places and would cherish the feels and vibes which at those times were missing in Kashmir. “The aura created by those artistic elements and paintings was different. It was a different feeling to be at a place which is filled with art and nothing. For me, art is therapy,” he said.

In Saudi Arabia, he once visited a bookstore where he was mesmerized by watching a separate art store. Immediately, he purchased some brushes and colors and started making paintings. He would devote two days in a week to his paintings. Soon he uploaded the picture of one of his paintings on Facebook and got immense praise. Then it was no stop for Wani. He made one after another.

He makes oil, acrylic and watercolor paintings and has a huge collection, depicting village life, shrines and mosques, art and architecture, mountains and streams on the canvas. While making bold and vibrant usage of color, he keeps the paintings simple and easy to be understood as he said the art should not create ambiguity and should be relaxing to the eyes. He said that art should be like music which is liked and cherished and despite its origin can connect with the viewers from all around the world.

“I like the architecture of the old city, Srinagar. The houses lined up near the river Jhelum, shrines and mosques of downtown. I have painted temples, bridges and scenes of various parts of the old city,” he said.

In Saudi Arabia, Wani has participated in various events and exhibitions. He said that he was the only expatriate being invited by the Saudi Royal Commission to do exhibitions and live shows with the eminent native artists during flower festivals and in other special occasions. He was also invited by the Saudi Heritage and Culture society to do art shows and live shows at many historical places and also at Chamber of Commerce Yanbu Saudi, he showcased his art.

He said, “The response I got there was overwhelming. When people saw pictures of snow-clad mountains, greenery and village life of Kashmir through my paintings, they found it very soothing and healing,” he said.

During vacations when he came back to Kashmir, he held exhibitions at many places. Till now, he has done three solo exhibitions. In 2015, he participated in an art exhibition at Sonamarg where all SAARC peace delegates were present and at Sangermall complex, Srinagar where he got much attention.

Another one at Sri Pratap College Srinagar, which was initially scheduled to be held for a day but due to the immense response of the audience, was extended for three days. The theme of the exhibition was tribute to Sher-e-Khass.

“Apart from the other work, I showed my work related to the old city. The then principal of the college liked it very much. At other places in Kashmir too, I have been getting good responses from people,” he said.

His recent was a 10 days art exhibition in Mehta Art Gallery, Uttar Pradesh.

Currently, the project he is working on is about the architecture built by a famous Sufi saint, Shahi Hamdan. He said, “Shahi Hamdan built Khanqah e Moula and Khanqah- e- Sopore where he offered Asr prayers. In my work, I will cover all the mosques and shrines dedicated to him. For this, I have to talk to historians and researchers.”

Talking about his clientele, he said that most of his clients belong to the UK, Dubai, USA and Singapore. “They know the value of art. The painting of Pursiyar Mandir was purchased by one of the clients in London,” he said.

What feels bad to him is that only a small section of people in Kashmir appreciates art and buys paintings. He said that the valley has good artists from all the districts but the disinterest of people towards art dampens the spirit of an artist. “It demands creativity and time. One has to practice a lot and only then it gets a wow factor. Artists can’t produce art because nobody buys things from them,” he said.

In addition to this, the lack of enough art galleries is another obstacle. It is pertinent to mention here that recently the Art Gallery has been constructed in old secretariat Srinagar.

“If art galleries would have been there, we would have got a chance to show our work,” he added.

He further said that to promote art and paintings, the Government should use the paintings made by local artists in their offices and establishments. “Also corporate companies can purchase our paintings. Art exhibitions should be organized so that people can purchase them. Art galleries should be in other districts too and there should also be a website or web portal where the paintings from local artists can be displayed and the whole world can see it,” he added.

He believes that art is the thing that takes a person on a tour of the place. “A visitor comes to know about a culture and heritage of a place through the paintings and art only. It is the identity of the culture. The art, culture, and sports makes the place attractive,” he said.

Talking about his philosophy- art as therapy he said that today people are stressed and are usually glued to gadgets. “I want people to take their eyes off their mobiles and see something soothing which brings a smile on their face. If my painting relaxes someone or brings a smile on somebody’s face, my painting has done its job,” he concluded.

Masood Hussain, Javiad Iqbal and Rouf Qayasi are some of the painters he appreciates and takes tips from.