We have to search and then preserve the objects used by our ancestors in the past, so that our posterity will ponder a while about our past 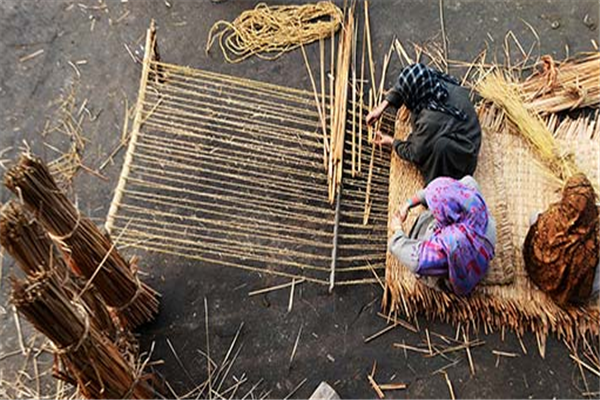 Use of straw and grass was known to Kashmiris from antiquity, numerous grasses and sedges were abundantly growing near the margins of our lakes, rivers, marshes, lagoons and in wet places, as our ancestors settled first close to these water bodies and gradually gained knowledge of use of all existing sedges and grasses, growing around them. They made many items of their requirement. A pot discovered in Mohenjodaro, a site of an Indus valley civilization 3000 B.C. bearing an impression of a course grass mat. Similar impressions were found on the pottery excavated from Burzahama and Gufkral sites in Kashmir, depicting the impression of coarse matting, indicate that straw and grass work in Kashmir was known very early. Leaves of many of our grasses being long, flexible, fibrous and durable even when dried and their cylindrical stems were strong and stout. So they utilized them for their daily requirements. They thatched huts, made hay mats as furnishing; hay ropes to carry loads or tow heavy items from place to place, or to fasten domestic animals, and many more items.

Huts made were covered from all sides with leaves of grasses and sedges, thatched with large orbicular leaves of (khikwatur) Nelumbium species and (Juwar) Euryale ferox, which range 3-6 ft. Attained the knowledge of twining grasses and sedges in to ropes that was a turning point in their lives and started thinking in multiple directions by weaving various items of their requirements. They made mud plastering smooth and durable by adding grass as binding material locally called Rabi bore. Hay grass was abundantly and easily available after thrashing seeds; was furnished loosely on the floor to make it even, warm and comfortable to sit and sleep. Gradually knowledge of wrap and weft was gained and started weaving grasses.

It is on records in the history of Kashmir that during reign of king Zainulabidin (1420 - 1470) art and craft was highly encouraged. He did not only restore the forgotten arts and crafts of Kashmir but also introduced new ones. It was Mirza Haider Doughla (1470 –1543) who after him appreciated and encouraged the art of mat weaving in Kashmir.

Our ancestors made all daily used items from hedges and grasses that were easily available and free of cost. After learning the art of making grass ropes of various dimensions by twining hay with both hands. Gradually learnt the art of making grass shoes (Pulhore); that was used both in summers as well in winter comfortably. Ropes were utilized to hook up domesticated animals so that they will not run away or destroy crops in nearly fields, besides to tie their oxen for ploughing fields, to carry the loads on his back, with the help of shruee (ordinary stick with a hole on one side passing hay rope to carry loads); or with kiltas (yaet).  Ropes were also used to tie the bundles of harvested paddy or oil seed plants. It was also used in patens (wooden shoes, Khraw and Khrawhore to wear during summer and in winters.

Gradually they learnt to weave various types of rough mats, and made small, one man’s mat to sit separately, with distinctive position or respect, to represent head of the family or respectable one.  This mat was peculiar, circular with a handle on one side, locally called Tschangij (Changij). It was also used for a guest to show gesture and to respect him by offering to sit on it. Similarly in order to bow before almighty God and to offer his prayers, rectangular grass mat with arched ends was weaved, which he named as  Jayee Nimaz (mat for prayer), totally different from Changij. Similarly furnishing loose hay on the floor in the huts was replaced by wagoo or patij as furnishing to sit or sleep comfortably. Wagoo was costlier because of being smooth, comfortable, durable and warm. It is made in city by lake dwellers locally called hanz (hanjis), and used by city dwellers as compared to patij that was weaved by expert hands in villages and used there, because of the availability of hay grass. One of the members in family used to be expert to weave all types of mats on circular, hay made frame work with different dimensions depending on the size of the Patij, woven as per the size of room or hall, locally called Kud.

We Kashmiris progressed quickly and became modern, because of education and hard work, resulting in better thinking, so, our way of living changed abruptly. Hay and grass items once comfortable, simple, cheap, and luxurious are thrown out; all artefacts became outdated and old fashioned, and disappeared instantaneously, and will never return again. Nobody is ready to purchase and use such items for his modern, concrete house to get insulted amongst modern society. Wagoo, Patij, once decorative and essential furnishing items of high families, mosques, shrines and other religious places are replaced now by modern high cost jute or coir matting, now by valuable luxurious and costlier wall to wall and luxurious floor covers. All hay grass and straw items have received a setback, and are outdated and extinct. Same is the case with Pulhore (hay shoes).

Demand of such items is lowered so the makers (artisans) have left the job and the art and culture has almost vanished. Nobody is ready to purchase a grass mat and use it.  Weaving and selling of these items is out dated. Our present generation is ignorant of all such novelty items. Nothing is known whether Department of handicrafts is interested in protecting this art or not, but no one is ready to furnish his modern hi fi house with grass and straw furnishings and thatching. This traditional matting and other house hold grass and straw items that were furnishing and decorating every house in Kashmir once, is fast disappearing from the scenes. Many artisans and traders have left this trade because of very low returns. Introduction of newer and trendy flooring items are considered to be main reasons for declining of this art. We have preserved all these items in our ethno botanical Museum and are in search of many more which were used by our ancestors in the past, so that our posterity will ponder a while about our ancestral past culture.