Optimism and its impact

In order to free ourselves from the continuous sufferings of life and go beyond the black clouds which darken our souls, we urgently need rightly guided minds 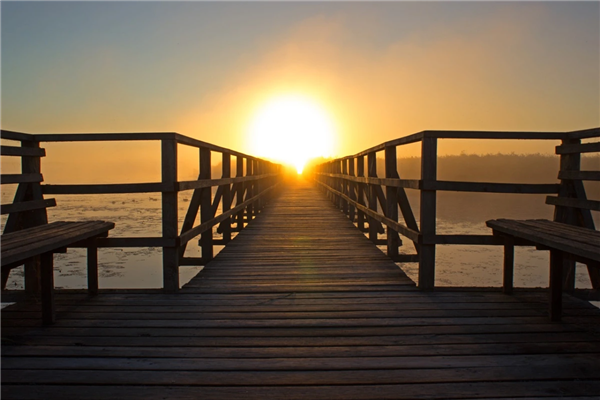 Man needs stability more than any other thing in his unstable life. Those who engage themselves struggling to achieve goals without being equipped with the weapon of stability face failure and defeat. In fact, as one’s responsibilities increase, his need for stability and assurance also increases. In light of this fact, it becomes the duty of everyone to learn how to avoid anxiety and revert to stability and assurance.

Struggling to acquire wealth, power, fame, and other material gains is not but falsehood. Efforts made in this path will go to waste, because man’s happiness lies in his own soul, just as the spring of misery lies deep in the heart. Medicine, according to Imam ‘Ali, the Prince of the Faithful (AS), is within man’s own soul, so we cannot find in outside influences the same effect that lies within the powerful resources of the human soul. Because outside influences are temporary, it is impossible that they would lead man to complete satisfaction.

Apictatus says: “We must let people know that cannot find happiness and good luck in places they randomly search for themselves. Real happiness does not lie in power and ability. Both Mirad and Agluis were miserable people despite the great power they had.

Likewise, happiness does not lie in wealth and large amounts of money. Croesus, for example, was not happy even though he had vast wealth and treasures. Happiness also cannot be achieved by governmental power nor by political chokes.

The Roman Ceasers were unhappy despite their great power. Actually, happiness cannot be achieved by acquiring the above mentioned gains together. Nero, Sandnapal and Aghamnin were known for their continuous weeping because they were like toys in the hands of misfortune.

Yet they had all the benefits of wealth, power and fame. Therefore, man has to search for the means of real happiness in his own soul and conscience.”

We must admit that the solution for many unsolved questions in nature, and the rapid increase in machinery are not enough to bring about a worry free life. This new machinery is not only unable to reduce the amount of suffering in the world, but has also brought with it many new problems and uncertainties.

Therefore, in order to free ourselves from the continuous sufferings of life and go beyond the black clouds which darken our souls, we urgently need rightly guided minds. The mind can secure human happiness the same way it was able to bring about many advancements in our material living. It is here that the power of thinking becomes clearly manifested and shows its astonishing influence on man’s life.

Clear mindedness is a fluent spring which advance man to a more excellent degree than material gains can by introducing him to a vast new world. Righteous thinking prevents clever individuals from becoming toys in the hands of money. Those whose thinking abilities grow to become the center of their existence can steadfastly stand in the way of infliction when it befalls them, by adopting a positive outlook.

In order to safeguard ourselves from being victims of various events, and to protect ourselves from the waves of negligence and exaggeration we must establish a scale of thinking for ourselves by which we can judge our behavior and conduct; hence guiding our souls to correct thinking that may equip us with spiritual powers to defeat anxiety.

The Effects of Optimism

In the same manner in which the body system becomes disturbed by various illnesses, the harmony of thoughts, which are held by one’s mind becomes disturbed by different factors and evil traits. Despite the powers of the mind, it cannot be independent of a person’s conduct. Therefore, man can only feel happiness when he enjoys good manners that conform to his thinking, conduct and enthusiasm. It is the responsibility of men to eradicate the roots of the traits that blacken his comfort and happiness.

Two elements that help create harmonious thinking are optimism and a positive outlook towards life and others. Optimism and positive expectations of those around you are guaranties of comfort for those who live in the field of humanity. Contrary to optimism are pessimism and ill-thinking of others which bring a halt to the ability of righteous thinking and reduce the ability to move towards perfection.

Optimism can best be described as a light in darkness which widens as the horizon of thinking does. With it the love of kindness grows in man, thus counting a new development in his view on life and in his outlook at it. Enabling man to see a more beautiful color of life, hence, achieving the ability to observe all people in a new light and the power to equally and justly judge each one of them. An optimistic man’s sufferings vanish and his hopes increase while keeping his apparent and spiritual relations with the various elements of the society in the best manners.

There is not a factor able to reduce the number of problems in a man s life like optimism can. The features of happiness are more apparent on the faces of optimists, not only in the instances of satisfaction but throughout life in positive and negative situations alike. The light of happiness shines from the optimist’s comfortable soul of the optimist at all times.

The need to acquire other’s trust is essential. In order for trust to exist between individuals, optimism must become part of their lives. This is a fact which has its direct influence on the happiness of the individual and society. Trust among the members of any society is an important factor in the advancement of that society.

The opposite is also true, for mistrust can always be a destructive element in the future of any social entity. The deeper the communication is between the various elements of the society, the faster development and advancement are. Also, among the leading social fruits of optimism are harmony, cooperation and trust. Moreover, peace in any social life can only be enjoyed if the relationship between the members of that life are built on affection along with trust and good expectations of others.

Islam Calls for Optimism and Trust

Islam has planted root in the believers by filling their hearts with faith. It is in this manner that our religion leads its adherents to comfort and stability. The Holy Qur’an states that the Honorable Messenger (SAW) was so confident that the hypocrites criticized him for it.

Islam commands its followers to trust each other, and to assume that another’s intentions are good. Therefore, it is not permitted for anyone to judge a Muslim’s actions as corrupt without proper evidence for such a judgment.

The Prince of the Faithful (AS) said: “Expect good from your brothers, unless something happen that makes you rule otherwise; and do not assume a word of his is evil when there is still the possibility of it being good”.

When people trust each other, it increases their love towards each other and brings harmony into their lives. The Muslims’ Imams expressed the importance of trust in many ways. Imam ‘Ali (AS) once said: “He who trusts others gains love from them.”

Dr. Mardin is quoted as saying:

“When you establish a friendship with someone, try to observe only his positive points: then try to appreciate in your consciences those good traits von have found in him. If you are able to center this advise in your mind, on will live a good and satisfactory life, and will discover that everyone presents his good and kind sides to you while trying to win your friendship for himself.” 3

It is even possible that optimism and trust affect the thinking and conduct of the misguided ones. In summary, they (trust and optimism) provide grounds for the salvation of such people.

Imam ‘Ali (AS) once said: “Trust rescues him who indulged in sin.”

“Recently I met the manager of a franchise of restaurants. This particular chain of restaurant is called “The Honorable Deal”. In these restaurants, which were established in 1885, the employees never presented a bill to the customers; instead the customer’s order what they wish to eat and after the meal they calculate the charges and pay the cashier without any questions.

“I said to the manager: ‘Of course you have a secret inspector?! You can’t trust all the customers of your restaurant?’ He answered: ‘No, we do not secretly watch our customers, yet, we do know that our method is appropriate, otherwise we would not have been able to advance during this last half century.’ The customers of this restaurant feel that they are dealt with honorably, it stems from the idea that the poor, rich, thief, and beggar all try to conform to the good conduct which is expected of them here.”

“If you interact with an unstable, ill-natured man and are trying to lead him to goodness and stability, try to make him feel that you trust him, treat him like a respected and honorable man. You will find that he tries to keep the trust that you have placed in him. Consequently, in order for him to prove that he is worth your trust, he will try to do what makes him qualified for your trust.”

Truly the element most capable of giving man optimism and trust is faith. Had all people been one nation who believed in Allah (SWT), His Messenger, and the Last Day, it would have been natural for everyone to truly trust each other. The lack of faith among people is the reason for the acute disease of mistrust in society. A believer, whose heart is comfortable with belief and trust in Allah, depends on that unlimited power whenever he is inflicted with weakness. He seeks refuge in Allah during hardships: this trains his souls and deeply affects his morals.