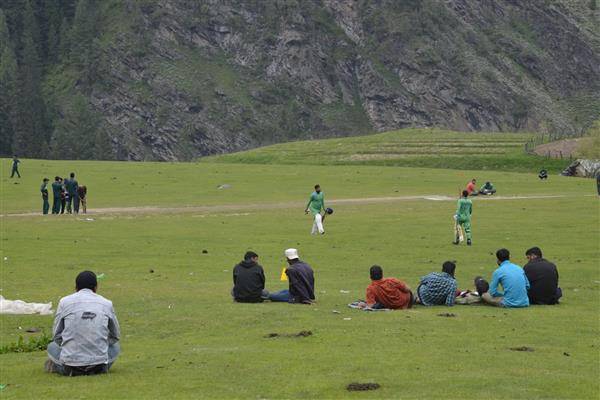 A scenic meadow in Bagtore village of Gurez in North Kashmir's Bandipora district, which was once in the crosshairs of cross-LoC shelling, is now abuzz with sports activities after India and Pakistan agreed to strictly adhere to ceasefire agreement in February 2021.

Bagtore village is less than a kilometer away from the Line of Control (LoC) that divides Kashmir between India and Pakistan since 1947.

Since the ceasefire pact, the scenic meadow nestled in the mountains of Bagtore is making noise over different sports activities being organized by locals replacing the decades-old roar of shelling.

Reyaz Ahmad, a local told Rising Kashmir when ceasefire pact was not in place, the locals of Bagtore and adjoining villages would live in fear due to cross-LoC shelling.

“Everyone is happy now and a lot of things changed after February 2021. Now we can walk without any sense of fear. Our playfield is now full of spectators during cricket matches and other sports activities", Reyaz added.

Mohammad Yousuf, an elderly from Bagtore's adjoining village Tarbal, told Rising Kashmir that whenever there was exchange of fire between two armies, the playground was most affected. “Even artillery shells fired by Pakistani troops fell on it.”

“Disappointed by this catastrophe and devastation, we would always wonder when our aspirations and dreams will come true, but things have become good after guns fell silent on the border," he said.

Suhail Ahmad, organiser of the cricket tournament which is being held at the playfield, told Rising Kashmir that everyone especially youth and children are happy that this playfield has changed from being a hotspot of volatile shelling to a safe place with a large influx of sports fans.

Cricket tournaments and other sports activities have been going on as the ceasefire pact began to hold ground since 2021 with huge crowds of spectators cheering for their favorite teams.