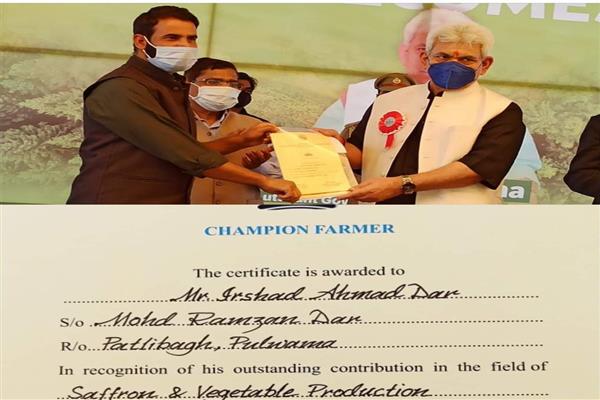 An educated youth from South Kashmir’s Pulwama district has changed the agriculture scenario of his village after becoming a change agent for the adoption of innovations in farming.

A progressive farmer and member of Kisaan Advisory Board, Irshad Ahmad Dar, 33, is looked upon by fellow villagers as a role model for farming.

Dar, a resident of Patalbagh village situated on one bank of Jhelum along Srinagar –Jammu National Highway, took to agriculture soon after graduating from Indira Gandhi National Open University in 2010 at time when majority of youth in Patalbagh were turning away from farming owing to low returns on growing traditional varieties of paddy, mustard and oat grass.

Some of them started running after government jobs; some settled as sand diggers. Dar did not follow the suit.  Knowing that the soil of Patalbagh area is very fertile and suitable for vegetable cultivation, Dar started growing peas on his land under guidance of experts from Sher-e- Kashmir University of Agriculture Sciences and Technology and Agriculture Production and Farmers Welfare Department, Jammu and Kashmir.

“The technical guidance helped me a lot,” Dar told Rising Kashmir, adding that he attended a few workshops on agriculture from time to time and ventured into dairy farming and saffron cultivation.

Over the years his fortunes changed, he started constructing a new house and purchased more kanals of land.

He became a model for others to emulate.  This young farmer didn’t limit modern farming techniques to himself only. He became curious for his villagers and started inviting experts from Sher-e-Kashmir University of Agriculture Sciences and Technology and Agriculture Production and Farmers Welfare Department to Patalbagh for transferring technical knowhow to fellow farmers.

Zubair Ahmad, a local from Patalbagh said that Dar has a definite role in turning village farmers to mass cultivation of peas, organic vegetables and other high breed varieties of paddy, mustard and saffron.

In recognition of his efforts, authorities inducted this progressive farmer as a member of Kisaan Advisory Board in 2021 where he raises issues facing the farmer community and seeks their redressal. He has also been awarded as champion farmer for his contribution in the field of vegetable and saffron production.

“He has been functioning as a link between various government departments and farmers of his village,” Mohammad Iqbal said.

Around 100 families grow peas in Patalbagh, now an organic village for vegetable cultivation. They have been reaping good fortunes for the past four years.