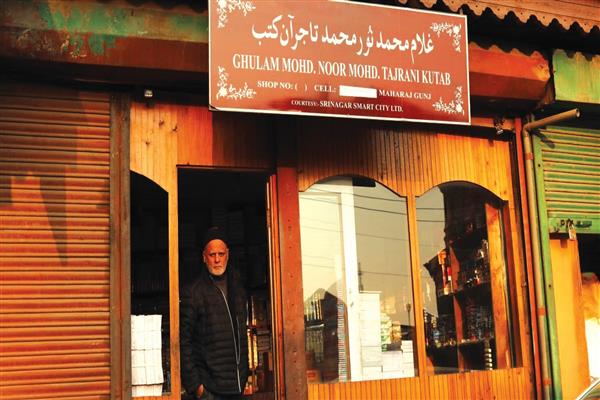 Lined amongst the historic shops at Srinagar’s Maharaj Gunj market, there is a small bookshop whose glorious past belies its outward clumsiness and small scale. The billboard atop the shop reads: Ghulam Mohammad Noor Mohammad Tajrane Kutub. This is a bookstore where during the first half of the twenty century, the literature of the valley was pioneered by a man named Noor Mohammad Kitab.

Established in 1890, the bookshop is overlooked by the Budshah’s tomb and seems, like the bricks of the tomb, a silent reminder of Kashmir’s glorious past.

Noor Mohammad Kitab is popularly known as Nawal Kishore of Kashmir, after the popular Indian litterateur Novel Kishore who pioneered the literature in the Indian sub-continent. In 1890, Noor Mohammad established the first publishing house in Kashmir valley, namely Noor Mohammad Ghulam Mohammad Tajran-e-Kutub under the auspices of his father Ghulam Mohammad. His father was a simple man and he himself being educated and oldest amongst the seven siblings took reigns of the family business. Under his leadership, both the Kashmiri literature and family business prospered unprecedently.

“My father Noor Mohammad was not only dynamic, but he was also educated and prolific in poetry, literature, and Islamiyat. I don’t think that it was on his mind to earn money, rather, he wanted to promote the Kashmiri literature that had gotten buried under the dust load of time,” Iqbal says adding, his father named him Iqbal out of his fondness for the great poet, Sir Mohammad Iqbal.

All the way from Sheikh-Ul-Alam, a fourteenth-century Sufi saint, to Ahad Zargar, Noor Mohammad was the first Kashmiri to recreate the seven hundred years’ worth of lost Kashmiri literature.

“My father went from village to village; from Sufi to Sufi; from poet to poet, and collected seven hundred years’ worth of lost writing,” Iqbal boasts and says that his father was keen on reclaiming the lost glory of the valley and wanted to bring back the literary works of Sheikh-ul-Alam, Lalla Dyed and other gems like them to life.

Until the partition, Noor Mohamad used to get the books published in Lahore and Lakhnow, but once the barbed wires came up and divided the land into two, he established his own press at Koker-Bazar Srinagar. Nowadays, the press has been transferred to Sheikh Pora Budgam where Iqbal’s two older brothers namely Ghulam Hamza and Ghulam Murtaza currently run and own it.

“During those days, (and I am speaking of the time when Pratap Singh ruled the Kashmir valley) the concept of the offset press was still alien. The books would first be jotted down by the calligraphers for months on end and then my father would take them to either Lakhnow or to Lahore to be printed on Litho press,” Iqbal recollects further. “It was a hectic and tiresome affair, but the fire to rejuvenate the Kashmiri literature burned hot in him.”

Apart from renewing the popular poetic works, Noor Mohammad was successful in recreating the history books on the anthropology and history of the valley as well. Some of the prominent historic accounts that he recreated were Tareekh-E-Hasan by Morikh Hasan and Waqaat-E-Kashmir by Khawaja Azam Dyedmari. He was also successful in commissioning the first translation of the Holy Quran in Kashmiri and the first biography of the Prophet Muhammad in the valley’s native language.

In recognition of Noor Mohammad’s work and contribution, the Jammu and Kashmir Academy of Art, Culture, and Languages commemorates his death anniversary on the 5th of March every year. Noor Mohamad was also a writer and has written two books titled Taranai Muslim (The Song of Muslims) and Tareekh E Kashmir (The History of Kashmir). Both the books were originally written in Urdu and offer significant insights into the history of both Kashmir and Muslims around the world.

In a biography written upon the life of Noor Mohammad, the prominent Kashmiri poet Ghulam Nabi Khayal writes, “Due to Noor Mohammad’s personal pursuits and immensely noble intentions, we have a great treasure of Kashmir literature at the moment that would have otherwise succumbed into unknown.”

During his lifetime, Noor Mohammad published nearly 250 books in the Kashmiri language, including the works of prominent authors like Ghulam Ahmad Mehjoor, Ahad Zargar, and Rehman Rahi. Additionally, Noor Mohammad brought the sub-continental literature to the valley and published a score of translations of those books.

“Though my father brought the sub-continental literature to the valley, it was his great aspiration to promote the indigenous works and the Kashmiri language. He often gave books either free of cost or simply lent them to people and said just read about your own history and glory as much as you can. Scholars used to come here to discuss philosophical questions with him at this bookshop and he always tried to contribute to the Kashmiri language in whatever way he can,” Iqbal says about the contributions of his father.

Under Noor Mohammad’s patronage, thousands of literary personalities thrived in Kashmir valley. Some of the prominent personalities who used to visit him for advice or to revel in the treasure of his literary books are Ghulam Ahmad Mehjoor, Ghulam Rasool Nazki, Abdul Ahad Azad, Fazil Kashmiri, and many more. It is also said that Sheikh Mohammad Abdullah, during his tenure as a teacher at Islamia College Srinagar, would visit his shop at Maharaj Gunj to read the newspapers that reached the valley every week from Punjab and indulge in political debates with Noor Mohammad.

“There is not a single poet, historian, or litterateur of the past century in Kashmir who has not mentioned this bookshop in his work, it was a prominent stop for all of them during the last century,” Iqbal commented.

However, after Noor Mohammad passed away on 5 March 1965, the publishing house that he had built started to fall apart. According to Mohammad Iqbal, they were all small children and the family business fell into wrong hands that brought ruin upon it. Currently, they only print the books that are in high demand and people don’t read much in Kashmiri.

For three generations, the Kitab family has been in the publishing field and their contribution to the written word in Kashmir has earned them the surname Kitab, meaning a Book. 55-year-old Mohammad Iqbal, who is a namesake of the poet of the east Sir Mohammad Iqbal, has been running the book shop for nearly 40 years now. He says that though all the three children of Noor Mohammad have continued into their father’s legacy, their own children are not willing to take up the publishing business.

“Our children have all taken different vocations and they will not go into the publishing field. I think the Kashmiri language does not have many takers anymore, but until the children of Noor Mohammad himself are alive, his legacy will live on through us,” Iqbal hopes.

Surely the Kashmiri literature is full of scale, richness, and depth, and it has reached down to the modern generations through one man: Noor Mohammad Kitab. They say that the world of books is most remarkable because nothing else that he builds ever lasts. Perhaps this is what sums up the life of Noor Mohammad Kitab, the man who pioneered Kashmiri literature and give it a new life.