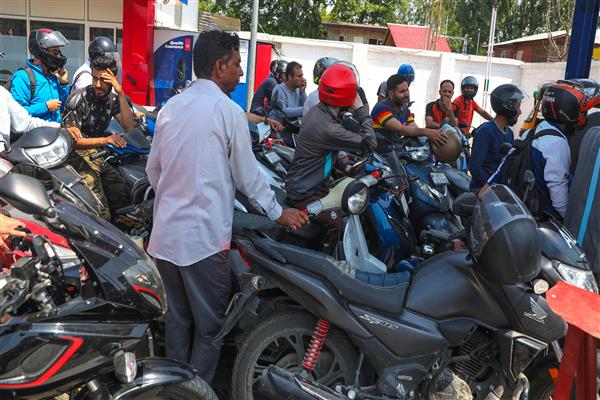 Srinagar, June 16: The petrol pumps in Srinagar on Thursday witnessed huge rush amid rumours of a fuel shortage in the valley. However, the divisional commissioner has refuted the rumours, saying there is no shortage of fuel here.

Petrol stations throughout the city witnessed unusual scenes early in the morning, and people were waiting in long queues. Traffic jams near petrol pumps were also reported from various city parts.

According to a Srinagar-based petrol pump owner, "The rush for refilling the cars and vehicles began after rumours started circulating on social media that the valley is facing a shortage of fuel."

"On any regular day, most of the pumps in the city close at around 11:30 pm, but on Wednesday night, people kept coming to the petrol pumps to get petrol till late in the night."

The people were also seen running towards petrol stations with containers to store more petrol. Many fuel stations in Srinagar were shut and the "no petrol" label was pasted there.

Petrol dealers said, "Hindustan Petroleum and Bharat Petroleum companies have supplied them with insufficient fuel, which has led to the fuel shortage."

J and K Petroleum Dealers Association spokesperson, Bilal Ahmad told Rising Kashmir, "There is no shortage of fuel in Kashmir. He said this was due to the system upgrade of J-K Bank. The dealers were unable to buy fuel as their accounts are linked to JK Bank.

"Ahmad said that the oil companies are only supplying fuel when the money is transferred to them." He admitted people in Srinagar and elsewhere faced problems. However, he said the maximum pumps would be restored this evening.

There are 1400 oil tankers owned by petrol pump owners who are supplying fuel to the Kashmir valley." He said, adding that every day, 500 petrol tankers are supplied to the valley.

He went on to say that the companies had directed retailers not to supply fuel to bulk customers, which include small companies. These oil companies want to directly supply fuel at higher rates to them.

The movement of private vehicles in Srinagar also witnessed a dip as people preferred to walk by foot.

Indian Oil Corporation (IOC) Director (Marketing) V. Satish Kumar also tweeted to dispel such rumors. He said, "Dear Customers,This is to assure you that product availability at our retail outlets is absolutely normal. There is adequate product availability and supply for all markets. We request that you not panic. IndianOil is fully committed to serving you at all times.”

Refuting the rumours of fuel shortages in the valley, Divisional Commissioner Kashmir P.K. Pole said there is no shortage of fuel in Kashmir. He said that people should not pay attention to rumours.