NGO on mission to inspire simple Nikkah in Kashmir 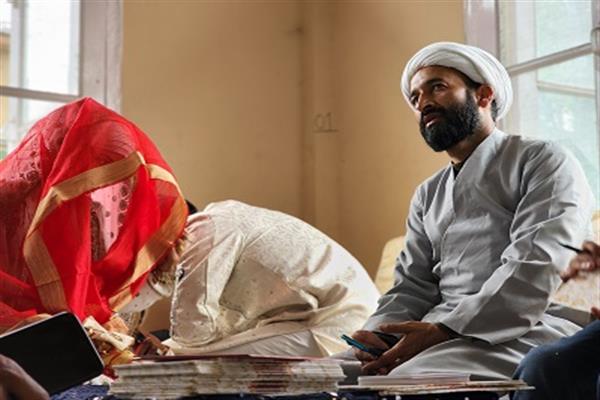 Srinagar, July 21: At a time when a large number of young people in Srinagar city have crossed their marriage age due to dowry and other evil rituals, a local NGO, ‘We the Helping Hands’ is on a mission to stimulate simple Nikkah. So far, with the help of this NGO, around 615 couples have tied knots.

Speaking to Rising Kashmir, Muzamil Nazir, General Secretary of the NGO, said that in present times, many superfluous traditions have sneaked into our society and, as a result, marriages have become unaffordable for many. He added that we have seen many cases in a society where women in their thirties and even forties are not getting married due to these customs.

"We want to spread a positive message through this mass marriage ceremony where we got 51 couples married from different districts of the Valley," he said.

Another member of an NGO said that thousands of girls have crossed the marriage age and their parents are unable to afford the expensive marriages. resulting in a huge number of girls as well as boys having crossed their marriage ages.

"The couples register themselves with the organization, and after verifying their credentials and other details, the NGO starts making arrangements for their marriage."

The organizers wanted rich people to "think before spending opulently on their marriages." Those who spend lakhs on the weddings of their children should first see whether their neighbors have been able to marry their wards. "

"We are fast turning into a hedonistic society where we hardly bother to look after our poor neighbors or relatives." They said these kinds of marriages should be encouraged. Every day, we hear stories about parents who are unable to marry their children because they cannot afford a dowry or expensive weddings. Above all, we are Muslims, and Islam encourages uncomplicated marriage. "

Helping Hand, a non-profit organization, began this mass marriage mission in 2013 and has since married 615 couples, including a non-Muslim couple. Each year we have a target of around 150 couples.

Except for the jewelers and the copper, we provide these couples with every amenity. Earlier, we were providing kits and other necessary staff to these couples. However, we faced problems managing things, and later we decided to organize massage marriages.

Another 70 underprivileged couples are ready and their marriage will take place in the coming month, an NGO member said.

We are spending an amount of 1.30 lakh on each couple, and all the money is donated by the public. We are just facilitating them. It is the couples who are choosing their partners and then reaching out to us for their marriage.

To a query, he said that around 60-70 people are voluntarily working with this NGO with the aim to promote the simple nikkah.