Nayeem Hassan: Folk artist who choose journalism to become voice of his community 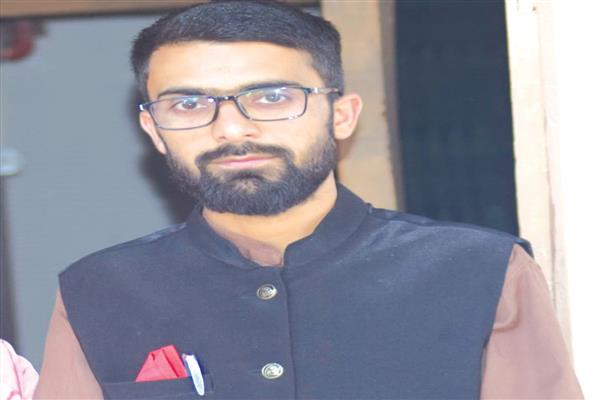 Around 60 kilometers away from capital city Srinagar, Bomai area of north Kashmir's Sopore is known for the folk artists usually called as ‘Baand’ in local parlance. The folk artists of Bomai Sopore ‘Bomaiyek Baand’ are famous all over Jammu and Kashmir.

“Baand pather (folk play) is in my blood and I have to carry forward the legacy of my father,” says Nayeem Hasaan, a folk artist. He, however, rues the lack of government support for the promotion of the art form.

However, unlike his father who strived hard throughout his life to perform and exhibit his art at various programs, Nayeem Hassan Bhat thought of drafting the problems faced by the folk artists and addressing the issue of his community with the government.

Besides helping his artists in performing various folk plays,Nayeem opted for studying journalism as he found journalism to be a way out to make his and his community’s voice heard. He did his diploma in mass communication and took convergent journalism in his master’s program.In the final semester, when he was asked to submit a research project, he chose a topic related to the very essence of his Community.

In his dissertation Nayeem talks about the social perception of Baand pather and Ladishah, the present status of these art forms from the experiences of performers and what consecutive governments have been doing, either through any policy initiatives or through making use of them for promoting any social message.

“I have written in my dissertation and I reiterate Baand pather and Ladishah is a dying art. There is no scope in it. Either the government should come forward and help this community or call it a day off,” Nayeem said.

Nayeem believes that the government's indifference towards this community is the main reason for decline of this art form.

“Certain incentives by the government should be there so that our young generation would love to take up this profession. We have some 72 villages and 35 thousand people who belong to the Baand community in Kashmir. The government invites artists, singers from outside the valley and from foreign countries to perform on the banks of Dal but when it comes to folk artists of our valley, we have to beg for a single performance. Governments spend crores of rupees for concerts but willingly or unwillingly don’t want to spend time on folk theater. Can we ask why?” questions Nayeem.

After his father's death, Nayeem now heads ‘Bomai Baandh Theatre’ and has a team of 20 people in his theater.

“Baand pather is our identity. Though we do other jobs for sustenance, we are usually associated with it. There are 200 households and four baand groups in our community,” says Nayeem.

He says it is difficult to rely on the art for the purpose of sustenance.

“Years ago, we used to perform in marriages, but that is over now. We hardly get a chance or two (in a year) to exhibit our talent,” he added.

Gaash Roazi Fulnai, Praznath, Dal Muklith Beha Karai Aalaw,Ye Naar kith Xhewe are the four famous plays by the late Ghulam Hassan and his team. Nayeem too has participated in many Pathers with his father.

“ I exhibited the art many times, but I found it difficult to survive on this only. We have center sponsored schemes for research, book publishing but our state and art academies seldom care. Let there be a good helping hand from government and cultural academies, I am sure the young  generation will stick to this profession with new ideas. Let there be National School of Drama and scholarships for artists,” Nayeem added.

Nayeem is of the opinion that folk art can be revived through the use of social media and he is working on that aspect, too.