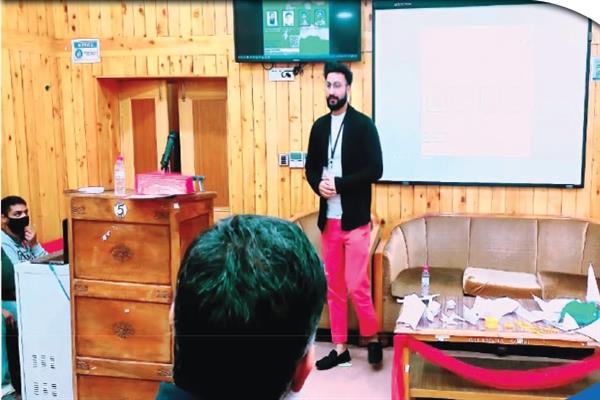 Having been rejected many times as an innovator, Naik Qayoom never thought of giving up. His interest in innovations was often seen as madness by others but he thought if it's madness then he doesn’t want to gain sanity.

Hailing from Dooru area in Anantnag, Naik is not only a national innovator but also a ray of hope for people who want to go in the field of innovations. Currently pursuing Electrical Engineering from Delhi, he started doing innovations from a very young age.  At that time when people around him saw him fiddling with the machines, they would label it ‘wastage of time.’

“I was good at studies from the beginning and when I got interested in innovations and started giving more time to it, people told me that I am playing with my career. They told me that my books can make my career and not the machines and devices,” he said.

Initially he was focused on the problems of grassroot level and was trying to find the solutions with the help of technology. In grade 6, he made a prototype of an automatic rice separator for cleaning the rice. Traditionally, the rice is cleaned manually and it has consequences on health too as the eyes, neck and back are in constant strain.

He said, “The function of the rice separator was to ease the process of cleaning which traditionally took 2-3 days. The rice separator made by me would do the work in 30 minutes or 1 hour. My first innovation gave me the confidence that I can do more than this.”

A year later, another innovation was made by him called envo cleaner to clean the air and prevent air pollution. The model would work on three gases- carbon dioxide, carbon monoxide and methane.

As a kid, his innovations couldn’t get more attention as he expected to get due to the lack of platform and he had no idea of the place where he would be appreciated and guided. The  NIF Cell J&K of University of Kashmir guided him. “It took me a lot of time to understand some things and I got an idea that I can do marketing of my products as well. I was very much interested in Science and Technology and learnt whatever was taught to me,” he said.

While he was in 11th standard, he went to IIT Delhi to receive training about Robotics. He said, “When I came back, I made a robot which was waterproof and inflammable and was of good use during the times of fire.”

The robot named C Qab Rabo had a camera fitted inside. The robot can be sent inside the building which has caught fire and the user can get the view of the fire inside the building. Many people appreciated the model but was also receiving criticism from some people as well.

He said, “They told me that I am not an IITian or NITian and I should clear my 12th class examination first instead of making robots. In their view, I was still a child.”

Later on, after moving to Delhi to pursue engineering, he did a lot of events where he spoke about himself and his innovations. The thing that bothered him was why can’t he do it in Kashmir.

When his talks started spreading in the village, a private school namely, Sir Syed Memorial Educational Institute called him to speak at the science awareness event where he talked about the technology which inspired many youths to take up the domain.

After that, he was called at a number of events, where he spoke about the field of Science and Technology and gradually with some like-minded people, a science club called Shining Star Innovative Club was formed in 2015. In 2016, the club was registered under Vigyan Prasar and is a member of VIPNET (Vigyan Prasar Network of Science Club). Through his club, he started doing science awareness camps and held many competitions.

He said, “What was lacking was the awareness about science, technology and innovations. We got kids and youth and started doing awareness programs. Awareness is important as I had to struggle for my recognition as an innovator because people had no knowledge about it so we decided to change the thinking of people.”

For both the machines, patents have been filed. National Innovation Foundation Cell J&K and Centre for Innovations Incubation and Entrepreneurship (CIIE), Institute of Technology, University of Kashmir are other organizations which supports Naik in his innovations. He said, “I am being guided by Mr. Sameer sir there who has provided me an immense support in creating my recognition. Thankfully I got to meet some helpful people who made my journey easier.”

To give a boost to the agriculture of Kashmir, he and the co-founder Abid lateef have established a company with the name B. Naik Agriculture Technology. The company manufactures machines and devices related to agriculture. Naik said that the company has been receiving good response and is run by the innovators of Kashmir. He said, “Despite larger population of Kashmir relying on the sector of agriculture for their livelihood, traditional methods are adopted for cultivation and plantation purposes. Through our company, we want to introduce new and affordable technologies in the field of agriculture which will make the job of people easier and also boost agricultural production.”

23 years old Naik said that the struggle he had to face, the younger innovators shouldn’t face the same. “Kids or people of my club don’t have to move from one place to another to showcase their innovations. I want to give them a platform where their ideas are appreciated at national level as many innovators don’t know what to do with their innovation. A single innovation can change society so all innovations are important,” he said.

Naik who is also teaching Physics and Chemistry at a coaching centre believes that with his way of teaching, he is training the kids to join the field.

“My way of teaching is practical. I want my kids to be prepared for tomorrow and if anyone tells them they can’t do so and so, they should ignore it like I did,” he concluded.