My Youth My Pride:Tennis ball cricket concludes in Kulgam, Khrew all set to host the event on Thursday

Culminating with grand success, the sports carnival, “My Youth My Pride” has reached wednesday in its final stages with just semi-final and final rounds left in the Cricket and Football tournaments. 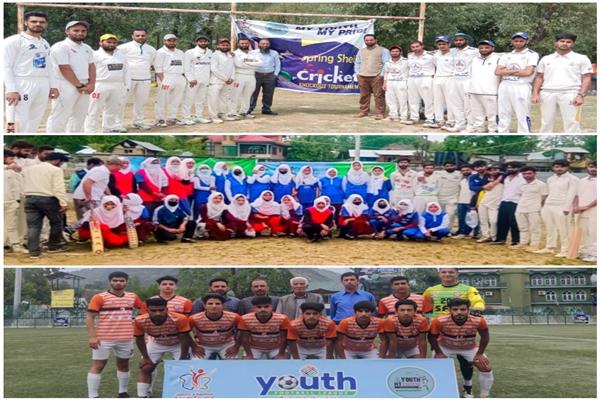 Culminating with grand success, the sports carnival, “My Youth My Pride” has reached wednesday in its final stages with just semi-final and final rounds left in the Cricket and Football tournaments.

As per JKSC Official,  Spring Shield Cricket Tournament and Youth League Football Championship trophies are up for the grabs as semifinalists and finalists are all set to battle it out in the middle and bring curtains to one of the most successful sports events organized by J&K Sports Council in recent years.
The official further added that the event, which was widely lauded for its extensive reach-out and taking competitive events to the doorsteps of the athletes, to tap the talent and groom them for the future, spread over almost all the districts of the union territory of J&K.
"Even as demand for the continuation of this program is being received across all districts," Secretary Sports Council, Nuzhat Gul said, and added, "this is just a beginning and more events are in offing, with more games being added to the program in coming months”.
Gul further added that as of now, the special sports initiative under the banner of “My Youth My Pride” shall culminate with the Cricket and Football events being held in South Kashmir and the summer capital, Srinagar.
Meanwhile, the first match of today’s fixture was played between Flakzon Tennis Ball Cricket Club Tensargom, Kulgam, and Damhal Hanjipora, Kulgam.
Damhal Hanjipora after winning the toss, elected to bat and scored 77 runs in the allotted 10 overs. Tawfeeq and Sartaj were among the top scorers for Damhal. Flakzon Club could only aggregate 59 runs in response, losing all the wickets in the process.
Tawseef and Sartaj shined with the ball as well, as both claimed 7 wickets together for the team, with the former claiming 4 wickets and earning him man of the match for his overall performance.
Likewise, second  match of the day was played between Girls School Kulgam and Chawalgam Kulgam. GHS Kulgam went to bat after winning the toss but the entire team collapsed with the scoreboard reading only 37 runs.
Shabana and Sobiya were picks of the bowlers for Chawalgam bagging 2 wickets each.
Chasing a very modest target, Chawalgam eves scaled the target in just 4 overs.
The event is organized by J&K Sports Council under the banner of My Youth My Pride.
Both Women and Men Cricket thanked Secretary Sports Council for Conducting the Event.
Shabana of Chawalgam was awarded man of the match for her all-around domination in the field.
On the occasion, as the prize distribution ceremony was in progress, women cricketers of Kulgam submitted a memorandum, a copy of which was handed over to the officials of J&K Sports Council present at the venue demanding a women's cricket tournament in the district.
Meanwhile , in the ongoing Spring Shield T-20 Cricket Tournament being played in Nanil Cricket Ground Anantnag, the 4th Quarter-Final match was played between Young Islamiya Anzwalla and BSM Mattan.
Mattan after electing to bat scored a challenging total of 188 for the loss of 7 wickets in their allotted 20 overs.
Gowhar Pathan was the top scorer for the team with 77 runs while Jamid Lefty and Fayaz contributed with 35 and 33 runs by bat respectively. For Young Islamiya Showkat with 3 scalps to his name was the pick of the bowlers.
In response, Young Islamiya fell short of the target by 31 runs even as Mudasir Lara, Nasir Kumar, and Nadeem played well but all their efforts went in vain. Gowhar, Fayaz, Umar, and Akash claimed two wickets apiece to take their team home.
Gowher Pathan of BSM Mattan who shined both with bat and ball was awarded man of the match for his superb performance. With this win, BSM Mattan along with Pahalgam Blues, Seer XI, and GSM storm into the semi-final of the T20 event.
First Semi-Final between Pahalgam Blues and Seer Eleven scheduled for today had a delayed start due to inclement weather conditions. However, the match was in progress when the report last came in.
In the ongoing Youth League Football Championship, four semifinalists will clash with opponents today. SCFA Bandipora will take on J&K Bank FA in the first match of the evening while SCFA Baramulla will face SCFA Srinagar.
Both matches are expected to be filled with a lot of energy and aggression as all teams consider themselves just two games away from the title.
Spectators were arriving at the scene and both teams were warming up when the report was being filed.
All the events are part of the “My Youth My Pride” sports initiative to reach out to athletes at their doorsteps, tap the talent and groom them in academies.