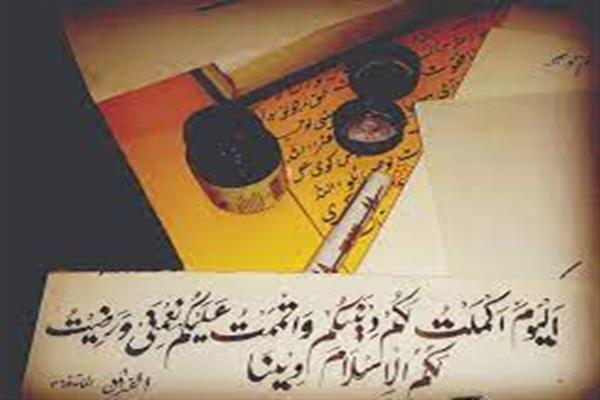 Coming from Gurez valley of North Kashmir’s Bandipora district, Mustafa-Ibn-Jameel(25) was not good at studies so he dropped out of school in 10th standard. However, something kept on stirring him from inside in his pursuit of self-exploration. He decided to spend some time in “solitary”.

During his stint of solitude, he decided to try his hand at calligraphy. The purpose behind the thought was to improve his handwriting as it was bad. Mustafa practiced calligraphy for some time and soon realized that he has learned the basics. So he decided to write a chapter of Holy book Quran. In doing so, Mustafa found “absolute” joy. That was the moment when it dawned on him that he will write the entire “Book”.

Writing the “Holy Book” was a big project so he thought he would start by writing few chapters of book and would simultaneously work on his handwriting.

After finishing few chapters from Quran, he decided to carry on with the work.

Mustafa’s remained so dedicated to this project that in a span of 11 months in 2019, he wrote the entire Quran. His hand-written Quran is comprised of 450 pages weighing around 21 kgs. In the process, he was not guided or assisted by any professional. He, however, would regularly get his work re-checked and verified from a Mufti (an Islamic jurist who is legally able to rule on various religious and personal matters).  His work has been approved by the Mufti.

The plan of translating Holy Quran into Sheena language had been in the pipeline for years, but it was only after completing Quran, Mustafa gained confidence to execute the idea. “In fact I used to discuss with my cousins and close friends that Quran has been translated in other languages, and it is high time that people should read its translation in Sheena language also,” he said.

Since Mustafa has dedicated his Sheena interpretation to youngsters, he had to be very careful with the language. Even a small mistake can change the whole context, he says.

He had to omit archaic and sophisticated words in his work. “I tried my best to keep the language as simple as possible. I had to consult three dictionaries, four Tafseers (detailed explanation of the Quranic commentary) and four Tarjams (interpretation of Quranic verses to other language). Even a 5th standard student can understand it easily,” he added.

He was assisted by a linguist and his work was finally approved by a Mufti. His translation work is ready and is now in process of printing.

Mustafa did not stop here. After translation work, he realized that not everyone is literate enough to read his translation. So he decided to record the interpretation in audio format also in his own voice. “Those who aren’t able to read can listen to the audio,” he said.

He recorded it in a local studio. Editing and mixing is in process now. He is all set to release the audio (Sheena interpretation) in coming days.

Since Mustafa was a school dropout he had to carry that tag with him all the time. He was not able to qualify the matriculation exams owing to his weakness in Mathematics. Despite trying his luck multiple times, he could not qualify it. He eventually became a ‘subject of taunt’ for his family, relatives and society at large. “I was labeled as a brand of failure, and was subject to mental harassment,” he said.

When he started the calligraphy work he was often demoralized by some of his fellows, so he chose to work at night instead of day. “To avoid their contact I did most of the calligraphic work at night after finishing Isha prayer (fifth Islamic prayers of a day) till the Fajr call (first Islamic prayer of the day),” he said. It changed his sleep patterns and he used to take rest for few hours in daytime.

Mustafa initially looked for waterproof-ink which he could not spot anywhere in market, not even in Srinagar and hence got his work laminated since the simple ink would not resist water,” he told.

“One has to be extra cautious while dealing with Quran. It is mandatory to be Ba-Wuzu (ablution) while working with it. Moreover, one should be full of pure thoughts,” he added.

Mustafa is currently doing Islamic research. After Sheena language he is planning to record audio interpretation in Pahari, Kashmiri and Urdu as other big projects for this year. “I have the passion to spread the word of Almighty, in the language people are easily compatible with. It has now become my point of living,” he said.