Muslims In The Valley of Kashmir: A Critical Analysis and the Islamic Perspective 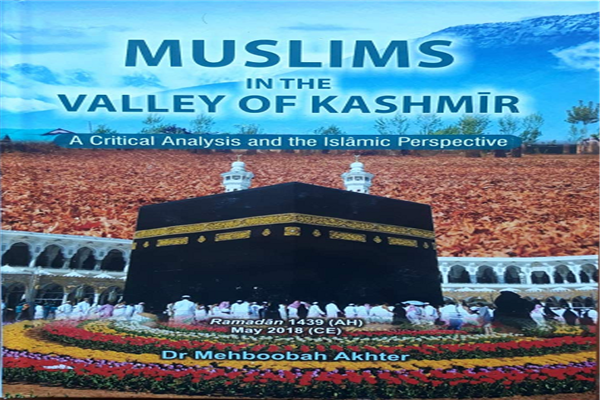 The author, Dr. Mehboobah Akhter, Assistant Professor, Deptt. of Higher Education, Govt. of Jammu & Kashmir, a gold medallist in her field and a  laborious intellectual in Islamic Studies, has taken a bold step by “critically analysing” the position of Kashmiri Muslims vis-a-vis the main trunk of the teachings of Islam. However, the book, at its very outset, seems to be a “didactic” piece of writing, as can be inferred from its “Dedication” to those pure souls who are “ready to shun disbelief, innovation and infidelity” and “who are ready to accept Tauhid, the truth of Qur’an and Sunnah!” However, the author, in the following pages, has tried to substantiate her views in the light of the Qur’an and the Traditions of the Prophet (SAW) which provide an academic foundation to the whole document.

It is interesting to note that that the author in the chapter “The Advent of Islam” writes that the “mingling of the orthodox and liberal elements resulted is what is usually described as Shah-i-Hamdan’s [RA] act of innovating rhythmic recitation of some verses of the Qur’an, popularly called Aurad-i Fateh” (p. 6). The Aurad, however, is a “creative composition” emphasising nothing but Tauhid, Islamic Monotheism. In our times, it has been elaborated and explained by different scholars like Hakeem Ghulam Nabi. In this masterpiece, there is the repetition of la ilaha ilaha Allah, there is no god but Allah, more than sixty times followed by different events of sirah and ending with the salutations on the Prophet (SA‘AS). According to the author, “the Muslims of Kashmir did not exhibit a strict tenderness for Kalimah, Namaz, Roza, Zakat and Hajj.” (p. 7)  By saying so the author is perhaps hinting towards the fact that during the first phase of its Islamization, Kashmiri Muslims were somewhat lethargic in adhering to the commandments of Islam due to different reasons. Perhaps the same is intended by the author when she refers to the “mahendi culture” and “beef abhorrence psyche” of some sections of the Kashmiri society (pp. 7-8).

In the chapter “Political and Religious History of Kashmir” the author has talked about the general indifference of the Sultans of Kashmir in the implementation of Shari‘ah. For example, the author writes “despite mass conversion, Kashmir failed to develop its political structure based on the fundamentals of Islamic state (Tauhid), evolved by the Prophet [SAW], (p. 13).” However, seen in the light of history, the political system evolved by the Prophet (SAW) was carried forward by the Rightly Guided Caliphs and after them the monarches/kings/sultans just followed the system to varying degrees as per their temperament which was indeed influenced by different political theorists. Kashmir, in this backdrop, did not remain too far behind the “mainland(s) of Islam” because here we see the political theory developed by Mir Sayyid ‘Ali Hamadani (RA) in his different writings especially the Dhakhirat al-Muluk.

In chapter seven, the author has touched Kashmiri marriages and celebrations and the rulings vis-a-vis them. Here, besides many an issue, the author has talked about the popular wedding song, which besides other lines, includes the famous line “aze ha yee Nabi/Muhammad Saeb panae lolo, i.e., today the Prophet (SAW) will attend this gathering himself.” (p. 140) How interesting it is to note that these very women begin the singing session with this line: bismi Allah kaerith hiyout-hayai wanwonui.....ism-i A‘zam paroyai/paroyo i.e., with Allah’s name we start this song (and) let’s recite the Great Name (of Allah, Ism-i A‘zam) before you, O Bride/Bridegroom!

In chapter twenty, the author has counted Ignorance, Bigotry, Taqleed, etc. as the causes of Muslims’ division and deviation from the Islamic principles (pp. 360-372). Here, the treatises of some of the contemporary thinkers and references there from, such as, Dr. Muhammad Hamidullah, Dr. Mahmud Ahmad Ghazi, etc. relating the subject could have been enlightening!

In chapter twenty-one, the author offers the “Solution and Way Forward” for the Muslims in general and the Kashmiri Muslims in particular to, “follow true Islam” in letter and spirit. Here, the author genuinely emphasises Muslim reconciliation through the Prophetic Sunnah and the Qur’an.

Dilpreet Publishing House, New Delhi has painstakingly published the book almost error-free which would be beneficial for students and scholars alike, price constraints notwithstanding!  The publication is also a welcome move vis-a-vis the woman scholarship of Kashmir Studies. Especially, the book represents a commendable effort on the part of the author to invite the Muslims to shun bid‘ah (innovation) by revisiting and rethinking their creed through the Qur’an and Sunnah.