Muslim Intellectual Deficit and the Way Out 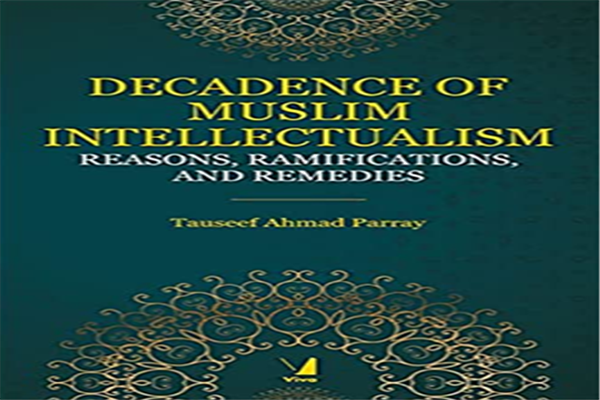 In his book, The Sacred Universe: Earth, Spirituality, and Religion in the 21st Century (2009), Thomas Berry (one of the twentieth century’s most profound thinkers and a scholar of the world’s religions) beautifully said, “In the ninth through twelfth centuries, Islam was more advanced in its intellectual development than the Christian West. Islam was even the teacher of Europe”. But, today when one reads Thomas Berry’s observation of the Muslim intellectual pinnacle and then compares it with the present situation of the Muslim world, one does not remain but to quote Allama Iqbal’s striking couplet: Ganwa di hum ne jo aslaf se meeras payi thi. Surreya se zameen par asman ne hum ko de mara (“We have despoiled the inheritance that we from our fathers won. The heaven from the zenith has dashed it down”). Naturally, a question would arise that after experiencing and enjoying such remarkable advances in knowledge and civilization, how and why the Muslim civilization crumbled, and fragmented in such a way unlikely to rise again.

These and other similar questions have perturbed and perplexed many scholars and thinkers especially the Muslim intellectuals of the modern age. One of the most important reasons often attributed to the fall of the impressive and glorious Muslim era is the “fall of Muslim Intellectualism”. Much has been written on the decline of Muslim civilization. And given the importance of the subject, scholarly works diagnosing of and remedial measures to the Muslim fall still continues, which is commendable. The present book under discussion is also an important addition to the literature. The author, Tauseef Ahmad Parray (an Assistant Professor in J&K Higher Education Department) who is a dynamic scholar whose writings on Islamic Studies are unmatched, attempts to address some challenging questions such as what led to the fall of Muslim intellectualism, and what are the possible ways through which Muslims could again flourish in the world intellectual map. Arranged thematically, the book comprises eight chapters.

Parray while locating (in Chapter 4-“What [and Where] Went Wrong?” Pp. 30-41) the reasons responsible for the decay of Muslim intellectualism, he points to many responsible factors: division of knowledge into religious and worldly; discord between theory and practice; indifference to ijtihad; lack of creative and critical thinking; internal disunity, and foreign colonization of the Muslim world. In Parray’s view, division of knowledge “became one of the major causes responsible for the intellectual decay”, of the Muslims (p.34), and, he continues to argue, that Nizamiyyah Madrasa (11th century) had killed the scientific knowledge and development in the Muslim world (p. 32). I think the argument does not confirm modern research. Since, al-Ghazali (1058-1111)—a towering Muslim intellectual—was associated with Nizamiyah Madrasa of Baghdad, therefore implicit in Parray’s argument is that the most important reason for the decline of Muslim science was al-Ghazali’s attack on Western philosophers, which culminated in the production Tahafut al-Falasifah (The Incoherence of Philosophers). This is a “classical narrative”, and a widespread belief among Orientalists that al-Ghazali or Madrasa Nizamiyya was responsible for murdering critical and creative thinking among Muslims. But this “narrative” has been persuasively disapproved of and rejected in some recent studies. For instance, George Saliba (a Lebanese-American Professor of Arabic and Islamic Science at Columbia University) in his book, Islamic Science and the Making of the European Renaissance (2007), has explored many Muslim scientists such as Ibn al-Baitar (d. 1248); Nasir al-Din al-Tusi (d. 1274), Ibn al-Nafis (d. 1288), Qutb al-Din al-Shirazi (d. 1311), and Ibn al-Shatir (d. 1375) who lived in the thirteenth and fourteenth centuries and made prolific scientific contributions to such diverse disciplines as medicine, mathematics, astronomy, physics, logic and philosophy. So, in Saliba’s view, Parray’s claim about Nizamiyya Madrasa is questionable because, in Saliba’s words, “every one of those fields witnessed a genuine original and revolutionary production that took place well after the death of Ghazali and his attack on the philosophers, and at times well inside the religious institutions (emphasis mine)” (p.21). Therefore, the western narratives should not be taken as for granted, and thus a critical evaluation of the Orientalists’ works becomes even more crucial yet challenging.

It is good to see that the author beautifully presents in the first 2 chapters the concept and importance of knowledge (‘ilm) through the Qur’anic perspective but when he offers remedial measures (in Chapter 8-“The [Possible] Way Out from Current “Muslim Intellectual Deficit”, pp. 154-166), one could not find any such direct instance where the Muslims are encouraged to evaluate the present situation, and to frame their future plan through the Qur’anic perspective. Because, I think, the “golden age” Muslim scientists and scholars’ sole inspiration for their advancements was the Qur’an; so, I believe, to regain the lost legacy, or to revive and reawaken the intellectual curiosity among Muslims, it is incumbent that they must turn to the Qur’an for the same inspiration which their predecessors have had. Nevertheless, according to Parray, the main problem lies in the prevalent Muslim education curriculum, which needs to be rehearsed, reformed, and refined to meet modern demands including the scientific vigor which is commendable. For this, he believes IIIT’s (US) proposed “integration of knowledge” project, still in a nascent stage, would be an inspiration to follow. The novelty of Parray’s discussion, however, lies in his diagnosis of 5 responsible factors in his “Theory of 5D’s: Disunity, Disagreement, Distraction, Doubt, and Dualism” (p. 135) for which he proposes “5-Point Remedial Formula” (p.161). The core emphasis of Parray’s Formula is on creating and providing a healthy academic environment and training to scholars and researchers which is indispensable to contribute to our society.

There are some areas which, I think, are missing in the book. On a general note, most of the Chapters are very concise; I feel that the discussions can be expanded and unfolded further. Similarly, Chapters 2-5 are lacking in the author’s own “closing remarks” of the discussions/arguments presented in them. In addition, the book should include a careful, if precise, review/discussion on Islamic “epistemology” including its most recent developments and ramifications. This will be an essential component of the book, exposing the readers to a reconstruction of the Muslim intellectualism before reading about the author’s own perspectives. Since, epistemology has profound ramifications on the “integration of knowledge” concept. Additionally, epistemology is basic to every nation’s or people’s worldview, which provides a framework or plan for education system, respectively.

Said that, overall the book is enthralling and engaging. His presentation makes the subject more enjoyable and digestible for the general readership. It is a welcome contribution to literature written on the revival of Muslim intellectual thought.

Box: Overall the book is enthralling and engaging. His presentation makes the subject more enjoyable and digestible for the general readership. It is a welcome contribution to literature written on the revival of Muslim intellectual thought