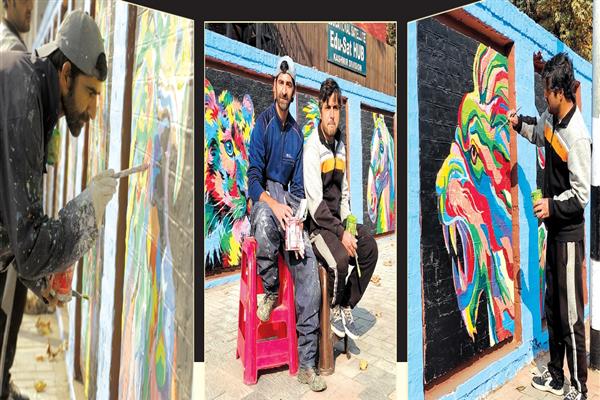 While he is speaking about the mural project and the work of his team, Naveed Mushtaq, the head artist of Team Alif, is interrupted by a halting auto-driver who after having inquired about the nature of the murals that he sees drawn on the wall, says that he has left the same kind of work thirty years ago and now drives an auto to feed his family. This is a serious thing to say to a person who has dedicated his life to art and is willing to go to any limit for it, but Mushtaq, surprisingly, is unflinching in the face of this startling comment. He seemed to have grown these sorts of words.

Mushtaq's group, Alif, has been commissioned by Srinagar smart city to beautify the city with enchanting murals and they have introduced mural art in Kashmir for the first time on a large scale. The initiative makes them all feel proud.

The group, in addition to artists from fine arts backgrounds, comprises journalists, poets, photographers, students, and all sorts of people who work together for the benefit of art in Kashmir.

While speaking on the nature of their group, Mudasir Gul, another senior artist in the group said, “Alif is an art foundation, we as like-minded people created to safeguard and promote the art in Kashmir. Without being tended to, nothing flourishes. Individually we are weak, but as a group, we are strong and may do something for the art in Kashmir.”

Gul has a Bachelor’s degree in Fine Arts from the University of Kashmir. He is aged 33 and has 15 years of professional experience in the field. He teaches certification courses in painting, portrait, and pencil sketching at his home studio in Srinagar’s Mehjoor Nagar.

Similarly, Mushtaq, 34, a resident of Tangmarg, has done a Bachelor’s in Fine Arts at University of Kashmir and Master’s degree in the same field from Kalabhawan, Vishwabharti University, Kolkata. He is the head artist at team Alif and has been doing art since childhood. He says that he was inspired by the beauty of his hometown to start capturing it with his pencil and with his brush.

While speaking on the purpose behind their Mural mission in Srinagar, Mushtaq says that it is to Promote art, the culture, and the tradition of the Kashmir valley.

“In addition to the aesthetic purpose, we are hoping to develop a sense of love in people towards their Srinagar city and instill an importance of wildlife amongst the masses,” Mushtaq adds while speaking with Rising Kashmir.

The artists have been drawing aesthetically appealing murals including pictures of snow leopards, tigers, foxes, parrots, shikaras, lakes, and much more on the streets of Srinagar, including M.A. Road and Residency Road in Lal-chowk.

The works are going to extend to various other places, including Dal-lake, Batmaloo, and Air-port Road.

The procedure of mural drawing followed by these artists starts with painting the base white with primer. Then the artists carefully draw the outlines, which are then painted with acrylic emulsion.

Murals are large-scale paintings drawn directly on walls, ceilings, and many other typically large flat, convex, or concave surfaces. They are presumed to be the oldest human art form, as cave paintings at numerous ancient human settlements suggest, and can be found all across the Globe.

Murals are the oldest existing anecdotes from human history and give significant insight into the lives of ancient humans.

“The walls that are usually dirty and boring, we turn them visually beautiful. Our murals brighten up the moods of passing pedestrians and convey a social message,” Gul adds.

The murals drawn by the group on city walls are primarily for the visual gratification of the passing people, and their work is an entirely different genre of art. It is not similar in any way to street graffiti.

While drawing a distinction between the Mural and graffiti, Gul says that graffiti is drawn illicitly and primarily represents sentiments or is politically charged in nature.

“In Iran, Syria, Palestine, and at various other places around the globe, those people who feel subjugated in any manner draw graffiti on walls to voice their dissent or discontent with the ruling regimes. We don’t do that here in Kashmir. We simply draw murals that are aesthetic in nature and draw our attention to social issues such as the protection of wildlife etcetera. Unlike graffiti, the mural is commissioned art and the commissioner has the say in what it should look like,” Gul adds further.

Gul himself was arrested last year for violating covid-19 protocol and drawing a pro-Palestine graffiti at Srinagar’s Gaw-Kadal.

The group works-on are predominantly in busy public places, the artists have to often face the insensible comments that passersby throw under a mistaken sense of humor.

“Sometimes people that are passing by say insensible things. Some say ‘are you drawing Modi’, some say ‘don’t draw pictures, its Haram (Prohibited in Islam); some say this and some say that. It goes on. But at the same time, there are many people who see value in what we are doing and take selfies with our work; sometimes ask us to share the frames of their pictures,” Mushtaq said.

The artists wear clothes that are smudged with paint all over. Their hair, hands, face, and all the rest of the body parts are blotched by the smeared paint, but they are unmindful and carry on with their work. It seems like a religious fever has gripped them.

“Often, Passers-by mistake us for ordinary laborers. But we are aware of our worth and consider that this is all part of our journey to an individual as well as collective greatness,” Mushtaq adds.

Mushtaq is a strong believer in his art, and considers M.F. Hussain, the celebrated Indian painter, as his ideologue. He says M.F. Hussain started his art journey with painting signboards, and it’s not a shame to start with something small.

Mushtaq, his colleague Gul, and other artists in the group consider Kashmir, their homeland, as their most sacred priority, and say that their hearts beat for the valley.

“Outside Kashmir, there is better exposure and better financial returns, but our Kashmir comes first and we want to do our bit for the valley,” another artist from the group says.

According to the artists, financially and emotionally, being an artist takes a toll on an individual in Kashmir, because they say that there is an extreme dearth of possibilities. Yet even with so many challenges, they soldier on and hold true to their calling.

“Whatever you see, feel, or think comes out in colors. As a Kashmiri, we tend to have more to say than the rest of the people around the globe,” Mushtaq adds.

Mushtaq further says that art as a profession has to be taken seriously and only then can you survive with it. “It has to become the most supreme aspect of your being.”

He himself lives by this statute and weathers the storms of this commitment with religious dedication. “My family often criticizes me for my choice of profession. They want to see me working in a government office. But it was never my vocation. They say you should have followed the formal studies and now you are starving.”

Mushtaq may not be a starving artist, yet, he is surely the one who is striving hard to survive.

“There is not much money in our field of work, so we have to find ways to generate money from the art in Kashmir,” Gul adds with a tinge of concern in his voice. “Because otherwise, there is no way that art would flourish any longer in the valley.”

Starting from the schools, Gul says that there is a lot of exposure to art in Kashmir, but parents do not let their children take painting or drawing with professional intent. “We don’t see the future in it, though it may be true to some extent, it never is the case,” Gul comments with surety.

Gul believes that Kashmir is heading fast into art and a lot of youngsters desire to dedicate themselves to it. According to Gul, the government as well as artists themselves are taking various steps to create more spaces for artists in Kashmir.

“Many senior artists are taking apprentices and it's also a way of helping the art in Kashmir,” Gul adds.

At the face value, indeed, art in Kashmir needs as much help as it gets. From Paper Mache to stone carving, the valley’s relationship with art is old and glorious.

“We need art galleries, schools, and exhibition points for the artists in Kashmir because these are the places where artists are encouraged and receive appreciation for their art,” one of the artists in the group added.

According to Mushtaq, it is also the responsibility of the budding artists to take art seriously and not only as a hobby.

“For the art to survive in Kashmir, the budding generation of artists have to take the art as a profession, not as a hobby only. Art is risky indeed in terms of financial stability, but if it's your passion it’s the greatest thing that you can ask for. If you ask me how I feel about my life upon having taken art as a profession, I would say that I am satisfied. Indeed, in art, the ups may be less and downs may be more, but then again, there are ups and downs in everything and art is a quintessence of human existence.  Art is life, and life is art,” Mushtaq comments with the fervor of a dedicated artist.