Morning affair on the banks of Jhelum 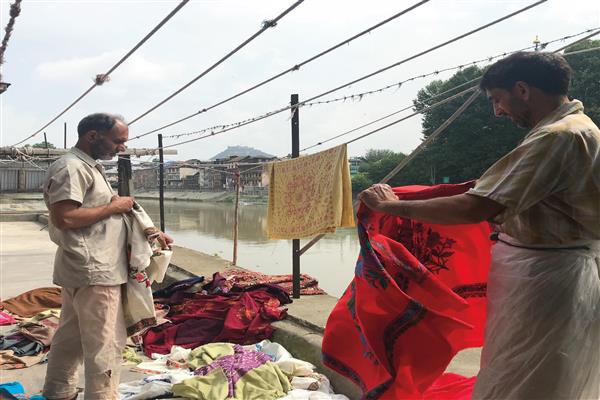 The sound of cloth slapping against the cemented slab breaks the silence of the morning. Inside a narrow-congested lane in Fateh Kadal of old city Srinagar, Gulzar Ahmad, a washer man wears rubber boots and ties a plastic sheet around his waist to stop his clothes from getting drenched with water.

Gulzar Ahmad is one of the four persons who works in the washing unit of Manzoor Ahmad Dhobi who has been managing the unit after his father passed away. He had to leave his job to opt for the hereditary profession passed to him by his ancestors.

The process is arduous and starts with the segregation of fabric according to their color scheme. The washer men fill the water in the huge tubs and add detergent in it. Gulzar takes a bar of cream colored traditional soap- the one used for years and rubs vigorously with the fabric. He then dunks the cloth in the cemented tank full of soapy water.

The washer man said that the washing takes place with the hands as well as the machine depending upon the fabric being washed.  Fabrics like pashmina, sozni and crewel are washed manually with hands whereas the fabric including wool is washed with a machine.

The process of washing involves use of various chemicals and acids. The acids are also used to remove some strong stains. The chemicals are imported from various states of the country.

Then the fabric after removing the stains is kept inside the water to remove acids and chemicals.

The soaked cloth is then moved to the motorized drum spinner that extracts the water out of the cloth before it finds its place on the clothesline and is left to dry in the open space.

The fabric once dried is ironed with the help of the huge machines where rollers are installed and are then piled into neat bundles.

The pressing machine works with the help of water. The machine has coils and heaters which heats the rotator of the machine. The machine has to be preheated before using. “The machine, if used without preheating can cut the cloth so it’s important to preheat it so that the rotator moves smoothly over the cloth,” said Manzoor.

The borders of fabric are stitched with the help of a sewing machine and cut into large pieces which is usually done by the women folk of the family.

The pieces go for the stamping and then to the artisans for various embroidery who finally convert them into the handicrafts products. Then again it comes back here in the washing unit to get the final touch which is then taken by various tradesmen across the world to sell.

Despite the back- breaking efforts put by the washer men, they don’t get the equal returns for their hardwork. Manzoor recalled the time of the past when washer men lined up at the ghats of Jhelum. He said that the water was pure, fresh and abundant. The polluted water of the Jhelum made them make washes in the premises of the house.

“The cost of chemicals has gone high whereas the rate of washing has remained the same. For a normal shawl, there is a charge of Rs. 30-50. For pashmina shawl, the rate is 150. Some washers charge less than this,” Gulzar said.

The low income generated from the tedious job has made many switch to some other professions. Ali Kadal, Shalimar, Safa Kadal, Dargah are some of the places where a section of people are still associated with the art of washing.

In Aali Kadal, an area called Batyar is known for the finest washerman of Kashmir. Showkat Ahmad belongs to a family of washermen associated with the art of washing for more than 100 years. Having learnt from one of his ancestors, Mohammad Sidiq Dhobi who was a renowned washer man from the time of Maharajas. Mohammad Sidiq was known for his finest techniques of washing Pashmina. The elites and royals of that time would get their expensive shawls washed from him. He has taught the art of washing to many people in and around the vicinity.

“I grew up watching the scenes of washing. With the rich knowledge that my ancestors had passed to me. I know how to remove even the toughest stains. We have been well known in the field since ages,” said Showkat.

Showkat, like his ancestors, goes early morning on the banks of Jhelum River to wash shawls. He believes the gushy water of Jhelum doesn’t need any chemicals. “The soap is properly removed with the gushy waters. Nature has a power to heal and mend everything. The work we do has the prayers of our ancestors,” he said.

Talking about his experience, he said that the toughest stain to remove is the walnut stains. He said, “Earlier, the gems like small soaps were used which were put in the boiling water by the female folk of the family. That would soften the shawl and doesn’t cause any damage unlike the softeners used today.  The cost of those soaps was Rs 5 and the chemical softener costs Rs 30,000 and is not that effective.”

For some fabrics, he said, salts and vinegar are used. "Salt has a capacity to hold the color," he said.

He further said that due to the Covid pandemic, the handicraft industry of Kashmir has received a huge setback.

“The tradesmen are not able to sell the handicraft products. The bundles of shawls, suits and other things are piling up at their place only. Also due to the fake products available in the market, the authentic ones are not finding buyers. Even the material used in the washing purpose is not pure and doesn’t yield good money. This work has lost all the essence. I don’t think the future generation will take up the job,” he said.

Another elderly washer man, Ghulam Rasool said that technological intervention in the craft has happened from the past many years.

He said that the chemicals were not used in the past and the process of washing was tougher than today. “Earlier when I started, the fabric was also good and pure. Now the quality of fabrics has also deteriorated. Harsh stains were removed naturally with the secret tips that every dhobi knew back then,” he said.

The unavailability of spinners or other machines further toughened the task of washing for people back then. “Everything used to take place manually. We would squeeze the heavy cloth by twisting it strongly with our hands. Though the process was time consuming, it didn’t affect the health of the washer man or the quality of the cloth,” he said.

To extract the water, Werkeej was traditionally used. The heavy charcoal iron was used to remove the wrinkles and iron the fabric. “The antique coal iron was heavy and would iron the clothes properly. Because of the uninterrupted electricity available today and all these machines, they vanished,” he said.

He considers social stigma as another reason behind the downfall of dhobis.

“My son didn’t take up the job because of the social stigma attached to it. Nowadays people think being dhobi is bad but it is an essential job as far as the Kashmir handicraft industry is concerned. It is the responsibility of the government to uphold the status of such communities who are the cultural icon of the place,” he said.

Since his son refused to carry forward the legacy of dhobis, Ghulam holds on to the last remnants in his unit.