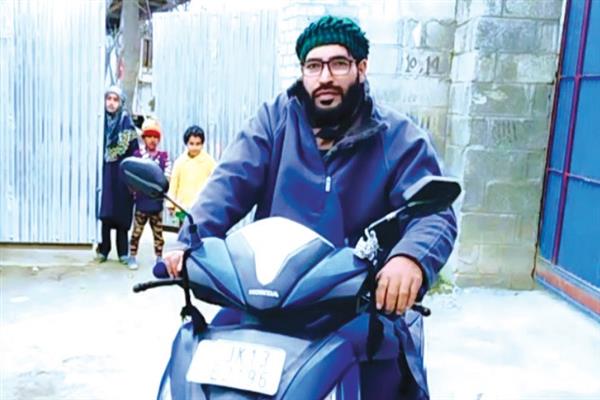 Considering his disability as a strength and not a burden, Mohammad Yaseen Bhat, 31, from Pulwama is a living inspiration for physically challenged people, as he not only earns his own bread and butter but also provides jobs to four other healthy persons. In Bhat's case, any other person may have resorted to begging, but it was not in him to do so and he always wanted to live a dignified life.

Bhat became instantly a local inspiration after he started his tailor shop and two poultry farms in a pursuit to live a happy, content, and dignified life on his own.

Bhat was only six when a tragedy canvassed him and he lost the use of his legs. Ever since he has been living a crippled life.

Talking with Rising Kashmir Bhat said that his parents procured prescriptions from many doctors in Kashmir and beyond, but they never helped.

Bhat says that he was not able to go to school, but his passion for better life invoked him to learn at least a craft. In Bhat's situation, considering the lack of life in his legs, sewing was an ideal option. Therefore, he went for the craft.

"At first, I came in touch with a local tailor but his skills and teaching technique could not help me," Bhat says. "Then my elder brother arranged another tailor who was a master in his craft. I continuously attended classes with him for a long time and until I did not become proficient in the sewing craft, I remained his pupil."

Bhat says that it was his Master who insisted that he open his own tailoring shop, and finally, when he did, Bhat says that he ceased to feel that he was a burden on his family, or on earth altogether.

"I felt the highest degree of happiness," Bhat adds while recounting the time when he opened his tailoring parlor.

Bhat recalls how he was demotivated by every near and dear, but how his thinking and passion paved a flourishing path before him. Of course, given his situation, learning skills was never easy, but he did it. He is thankful to his family who helped him greatly in his endeavor.

"My brother used to pick up me in his lap, shoulders; taking me to tailor shop and stood there whenever l need any support. He arranged a sewing machine and other stuff required for sewing clothes. He opened doors of hope for me," he said

Bhat says, after opening his unit of sewing clothes he has not only earned livelihood for himself but for his family too and has openly stumped all those persons who have demotivated.

"For last thirteen years, I am in this profession and till now I have tutored around 30 boys and girls in tailoring craft. All of them are working in different units," Bhat says proudly. Currently, two girls are working in Bhat's unit and they are in the learning process.

At Bhat's shop, there is always a huge rush of customers and they wait for months on end. His customers also prompt him to keep huge stocks of clothes for sewing.

"People from far-flung areas pay a visit to my unit for stitching bridal clothes. They inform me months before their marriage and l am happy that I have reached this far," Bhat adds further.

After the success of his tailoring unit, Bhat embarked on another journey and installed two poultry farms. It was not easy to start another venture but his determination and commitment guided him to ford the new streams of success.

"First l acquired an interest-free loan from the bank and paid it for the first lot of chicks. I employed two jobless youngsters and under their oversight ended up on the profit side. I am paying a good salary to them each month. Thank God today l am feeling proud of myself."

Bhat drives a government-sponsored bike and it helps him keep an eye on his businesses.

" l used to call upon different government officers about the schemes for handicapped persons and finally l got my bike. Now l can move anywhere on my own," Bhat adds while feeling grateful for his newfound lease on life.

He requests all specially-abled people to stop relying on others for support and start things on their own, "Specially-abled people need to stand up and show some courage. Believe me, they will be more successful than normal people. It is not a time to sit at home but to come out and traverse the seas of opportunities."


"After remaining confined to a room for more than seven years, I got very depressed and finally decided to earn my livelihood. l remained committed and attained success," Bhat says while speaking with Rising Kashmir.

Bhat laments the trend wherein the physically challenged people are drawn towards begging, "my request to everyone will be that stand on your legs so that you won't be forced to beg."