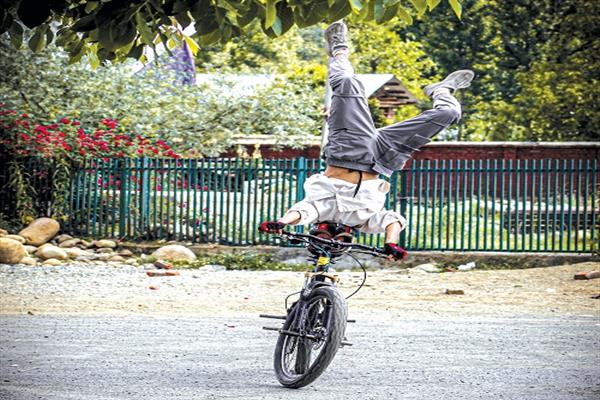 When the kids of his locality were playing much cherished games like cricket and football, Mohammad Farhan would keep himself busy in learning freestyle riding to perform tricks with his bicycle. Labeled by locals as an unsafe sport, Farhan would often find himself alone practicing in whatever space he used to get.

Hailing from Kulgam, the 15-years-old Farhan is known for doing crazy stunts with the bicycle. Doing headstands on the moving bicycle is what he likes the most. It excites as well as frightens theonlookers when he rides his bicycle.

Farhan has no coach to help him practice. At the age of 11, he stumbled upon a video of MTB (Mountain terrain bicycle) riders on YouTube. It was intriguing for him as he had never seen anything like that before. Soon he realized that he can do it too and started grinding.

MTB is an off-road bicycling that can be pulled off on specially designed bicycles. Calling himself an MTB freestyle rider, he said that he still is in the learning phase.

“I couldn’t keep calm. The stunts of the bicycle riders left an ineffable impression on me and inspired me to begin practicing,” recalled Farhan.

Though new but not difficult, he said that the sports is like any other but a rider needs to be careful.

“There are some things that you need to keep in mind while riding so that you don’tfall off the cycle. You have to maintain balance and plan your move in advance. It’s creating your own style, it’s risky and fun, daring and calming too,” he said.

The bicycle has to be a special one for stunts to be performed which is usually expensive in the market.

“The stunts can be done on a local bicycle too but it should have that strength to bear your body’s weight while performing stunts. Such bicycles are costly and are imported from outside,” he said.

He has made one for himself by assembling the various parts imported from different places of India. “Some of the parts are imported from foreign because of their unavailability in the Indian market,” he added.

The stunts performed by him on the bicycles are mixtures, stoppies, wheelies, acrobatics etc. In aerobatics, the cycle moves on its wheels while the rider performs over it.

“Acrobatics are my favorite. I do headstand, bike surf and other tricks depending on how much creativity I can get in my mind. I get a massive adrenaline rush. It is an action sport different from cricket and football. Here you can make and break the rules and explore things.  You can do spins and what not,” he said.

As the sports involve stunts, the risk factor comes with it. In the beginning phase, there was not a single day that he would come home without bruises and injuries.

“I would hide injuries from my family. I think you learn by hurting yourself. The injuries come with every act but once you wear safety gears then there is nothing to worry about,” he said.

To avoid accidents, he said that helmet, shin, knee pads and gloves are compulsory for a rider. “Body flexibility is very important. For that you have to do stretching exercises daily. Have a calm mind and just focus on what to do next. A toolkit is also important because sometimes you have to be a mechanic too,” he added.

Farhan wants to continue his studies and also wants to make his name in the sport.

“It’s just the beginning. The worst and best are yet to come for me. Outside the valley, there are many riders and many events are organized where riders showcase their skills. Due to the unavailability of proper venues and lack of information, riders don’t find a proper niche here and are often misjudged which has led many people to give up the sport,” he said.

Currently he practices in a parking space of the nearby public parks. During winters, when it snows, he said that he has to clear the space first and then practice. He wants a safe private place where people don’t hurl abuses at him and shoo him away.

“Initially they used to scold me a lot and still scold me for doing this.  Every new thing is considered bad by society but I am not going to live my life on anyone’s terms and conditions,” he said.

He often finds youth chasing and clapping for him when he is on wheels.

Initially it was tough to hone the rudiments of the art in the place which has no infrastructure and a lot of societal pressure to face but since he has started making content and posting on his social media handles, the response of people have been good.

During pandemic, when the schools were shut, he would practice around 4-5 hours a day. Since his schools have started functioning, 2-3 hours of practice every day is sufficient.

“The sport is no different but requires a lot of hardwork and practice. I can’t play any other game because I have never practiced them.If you don’t practice, everything will be difficult,” he said.