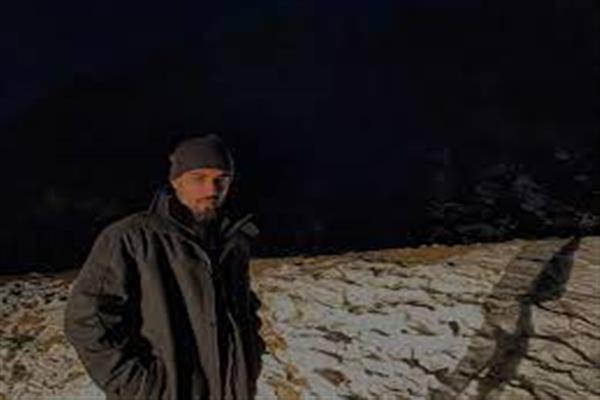 As the saying goes, “Life works in mysterious ways,” so it did with a 21-year-young man from Nawakadal Srinagar, Mir Muhammed Tafazul.

Tafazul, who was regular person up till last month, has become a rage on Youtube with song “Kitna Tarsey” in which he acted along with the television star Aparna Dixit, has already garnered more than one million views.

Interesting part of the story is Tafazul was not supposed to act in the video in the first place. He was on the sets on the request of his friend, who was directing the video and it was he who had insisted Tafazul to come there to assist him.

“The director of the song was one of my friends. He had asked me to assist him on the shoot day. So I came to the set as an assistant director,” he said.

After the actors came on the set, Tafazul handed over the script to them to prepare for the shot. The producer had casted famous television actress Aparna Dixit as the female lead and everyone was excited to work in the project.

But before the shoot could start, the director and Aparna Dixit came to Tafazul with a strange proposal. They told him that there's something wrong with the male lead who was supposed to act in the video and wanted him to replace him.

“They asked me to act in the video instead of the male lead. They told me that I was very good looking and also knew the script very well, so it was better if I act in that video,” he said.

Tafazul was actually the writer of the song. He had written 'Kitna Tarsey' in 2019, and it took a year to produce it.

He could not believe what he was hearing. But Aparna talked to him and convinced him to take the proposal.

“It was really difficult for me to agree to act as I had no acting experience,” he said.

After thorough discussion with the director, producer and co- actors, he finally agreed to act.

The shoot was completed in a single day.

He said after watching the first cut of the video, the whole team said that it was the best decision to make him act in that video.

“I got a lot of appreciation and everyone was talking about my screen presence and expressions as an actor,” adding that he was very nervous and scared about the release of the music video.

“I didn't know what response I would get from the viewers. The video was released on Jan 6 2021, and it garnered 1 million views within a week,” he said.

He said that he was overwhelmed by the response and love people gave to him to the song in particular.

“Everyone appreciated my acting and could not believe that it's my debut as an actor, I also got messages from many people in Mumbai, congratulating me for my work and even invited me there to start my career as an actor” he said.

He says that these days’ people see him as an actor whose debut video created a buzz and garnered many views.

“I am just a common boy, who happens to be an accidental actor,” he said.

After getting such a positive response from his family, friends and all the people who watched the video, Tafazul has decided to pursue a career in acting and would soon be joining theater.

Though acting came to him accidentally, but writing was something which he was doing for some time.

After entering college Tafazul had joined the writing and poetry society of his college.

“I started to write my own poems and eventually my friend, Rauhan Malik, who is a very good musician, happened to like my poems,” he said.

Rauhan Malik is the lead singer of “Kitna Tarsey”.

Tafazul and Rauhan in the past have also worked on many songs together.

“It was a post abrogation of Article 370, when communication blackout was imposed in the J&K, we released the album song 'Khatt'(Letter),” Tafazul said.

He added, the song was for every Kashmiri who was helpless and hopeless, who wanted to talk to their loved ones, who missed them and needed to hear from them.

“Khatt was played on the anniversary of abrogation of article 370, August 5 2020, on India Today. Rajdeep Desai, appreciated the words written by me,” he said.