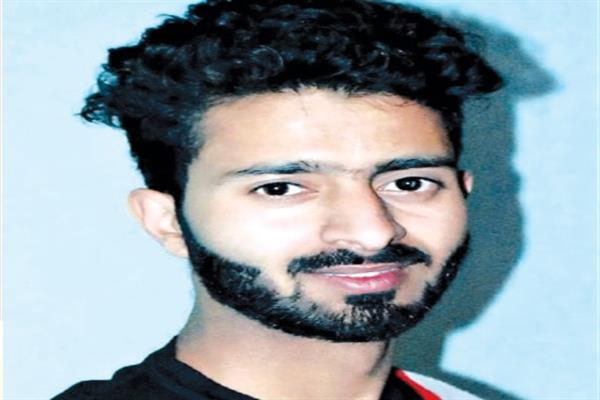 The 21-year-old lyricist from Frisal village in South Kashmir's Kulgam district has written dozens of songs, of which “Doun Dilan” has received more than two million views on social media so far.

Muntazir Yaasir, a student of Anantnag's Government College for Boys, said, he was fond of writing poetry and ghazals from his childhood.

He says that from the sixth grade he used to write something on a rough page and then make a paper airplane and throw it away. Once that paper airplane reached to a teacher and he read what was written on it. “This teacher recognized the talent of poetry in me and since then I have preserved all poetry,” he said.

Zee Music Company, a company that has gained a large share of the market share in Bollywood music, last year selected the lyrics of Muntazir's “Doun Dilan” for singer Ishfaq Kawa, which was later released and earned over two million viewership.

Another song, written by Muntazir and sung by Ishfaq Kawa“Roye Choun” has 13 lakh views. Lalvun Naar, Mazaar etc are some of his cherished songs.

While narrating a incident, Muntazir said, “I was about to enter the 12th examination centre when a poem came to my mind, I went back and wrote the words on a piece of paper first and then appeared for the examination.”

He believes that a line of poetry can touch the poet's mind at any time of the day.He said, “it is not that I write poetry when I have free time, but sometimes during the night it strikes my mind, I get up and write the lines and go to sleep again.”

Muntazir got his inspiration towards poetry from the poets including Ghalib, Allama Iqbal, Sheikh ul Alam and Jaun Elia.

He has collected all his poems and is planning to approach a publishing house to turn his writings into a book.

His upcoming song is likely to come out next week with singer Uzma Shafi.