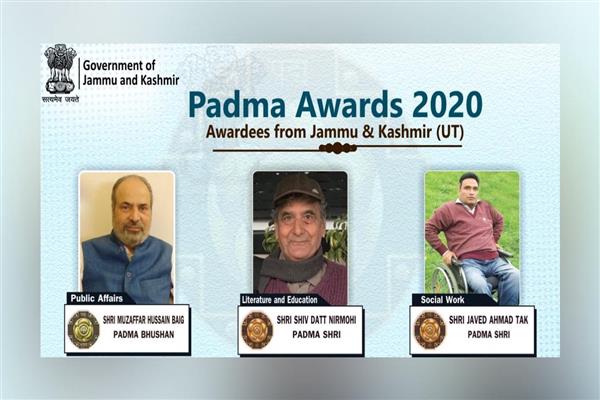 President of India, Ram Nath Kovind, on November 9, conferred the Padma awards to 119 recipients in recognition of their distinguished contribution in various disciplines involving an element of public service.

At least five persons from Jammu and Kashmir made it to the list of the Padma awardees and brought laurels to the Union territory.

Rising Kashmir highlights the contribution of the awardees who were appreciated by the center as well as Jammu and Kashmir administration for their works and achievements.

Social work, Javed Ahmad Tak says that the horrible incident on March 21, 1997 left him disabled when an unknown gunman barged into his home and shot him in the back, damaging his spine and other vital organs.

Tak said that the reason behind receiving the Padma Shri award was the struggle of the disabled persons that inspired him to work for the social good for all those persons who were sailing on the same boat.

He has pursued a post-graduate degree in social work from Kashmir University.

Recalling the ordeal of two decades back, Tak said, “In the intervening night of March 21 and 22 in 1997, I was at my uncle’s home and some unknown gunman barged in and fired upon me on my back in which one of my kidneys, part of liver, and a spleen was damaged.”

He said that since then, he has been in service for the disabled persons and after three years in 2000, he founded an NGO Humanity Welfare Organization Helpline for welfare of the poor and disabled persons.

Tak is also a patron of Zeba Aapa Institute—a school for inclusive education for specially-abled students.

Tak was awarded with the Padma Shri award for social work.

Senior politician and former Deputy Chief Minister of Jammu and Kashmir Muzaffar Hussain Baig was awarded with Padma Bhushan for his work on public affairs.

He was born in Wahidna village of north Kashmir’s Baramulla district and had completed his master's degree from Harvard Law School.

With the position of Vice-Chairman in the Jammu and Kashmir People's Conference, Baig began his political career in the year 1996.

Later in 2002, he fought the legislative assembly election with the Jammu and Kashmir People's Democratic Party and won from Baramulla constituency.

Notably, the Lieutenant Governor Manoj Sinha earlier this week congratulated the Padma awardees from Jammu and Kashmir and said it was a proud moment for the people of the union territory.

“Heartiest congratulations to all Padma awardees from UT of J&K. A proud moment for the people of J&K,” Sinha Tweeted.

A Jammu based experienced personality and a Dogri author, Shiv Datt Nirmohi was awarded with Padma Shri for his outstanding performance in education and literature.

Hailing from Panthal village of Resai district of Jammu region, Nirmohi was born in 1937. 84-year-old, Nirmohi has pursued a masters’ degree from University of Jammu in Hindi subject.

Later he worked as a school teacher and in a short time Nirmohi was appointed as a lecturer to teach Hindi subjects in one of the Government Degree Colleges of the region.

Reportedly, Nirmohi has worked for the Union Public service Commission as subject expert of Dogri language and also served as a member of the Advisory Board of Jammu and Kashmir Academy of Art, Culture and Languages as also the Sahitya Akademi, New Delhi.

In 1972, he was awarded with Outstanding Teacher Award (OTA) followed by Bal Sahitya award in the year 1980.

Nirmohi has been working tirelessly to promote the Hindi language in the Hindu majority region of erstwhile state of Jammu and Kashmir, besides has a huge contribution to preserve the Dogri literary traditions and the cultural heritage.

For decades, Ghulam Rasool Khan, a handicraft artist of the downtown area of Srinagar has been continuing the legacy of his ancestors.

66-year-old Khan was honored with Padma Shri award for his outstanding performance in Art.

He has been an extraordinary example of the handicraft artists from Jammu and Kashmir and is known for his efforts to preserve the oldest outline of Kashmiri shawl technique art and innovating new techniques of making Kashmiri shawl.

Reportedly, Khan is a chairman of All J&K Shilp Guru National Award and till date bagged scores of awards in the field of artisans’ society.

The LG administration has admired his efforts and congratulated him for bagging the prestigious Padma Shri award.

“Many congratulations to Shri Ghulam Rasool Khan and the family of Shri Chaman Lal Sapru (Posthumously) from UT of J&K for receiving the prestigious Padma Shri awards 2021. Their achievements and exemplary service to the nation will inspire and motivate generations,” LG Twitted.

Author of around eighteen books, late Chaman Lal Sapru was awarded posthumously with Padma Shri for his excellence in the field of Literature and education.

An enthusiastic teacher, a journalist and a well-known social activist, Professor Sapru has many firsts to his credit.

Born in 1935, Sapru has served as a professor of Hindi subject and was posted at various degree colleges of Kashmir. In 2020, Sapru passed away in Delhi.

Reportedly, Sapru had graduated from erstwhile university of Jammu and Kashmir and completed his post-graduation from Punjab University at Solan.

In the meantime, taking to micro-blogging site Twitter, President of India, Ram Nath Kovind twitter, “President Kovind presents Padma Shri to Prof Chaman Lal Sapru (Posthumous) for Literature and Education. He spent his lifetime furthering Hindi language, education of women, social equity for the marginalised and the cultural ethos of India among students in Jammu & Kashmir.”