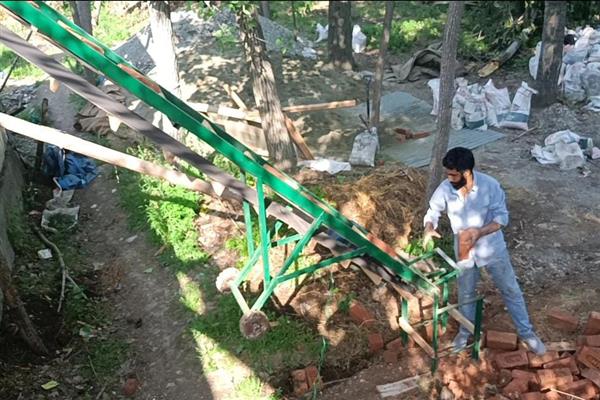 Budgam, June 21: Ghulam Hussain, 40,a resident of central Kashmir’s Budgam districthas puzzled people with his innovative acumen. Hussain invented amachine that can lift bricks to the second floor of the house within a limited time and withless expenditure.

Speaking to The Rising Kashmir, Hussain a resident of Khanda village said that this machine will help people to save time and can fulfil the work within a limited time and ona low budget.

Detailing how the idea struck in his head, he said,"I was planning to build the second storey of my house, but after a rough calculation, the charges of uplifting bricks to the second floor were surpassing the brick cost. Then the idea to develop the machine struck my mind."

Mir, a carpenter by profession has been in this field for decades now.

"I am a carpenter by profession and have been working in different areas where I mostly saw labourers carrying the heavy loads of bricks on their shoulders and back which pinches me a lot," he said.

After that, he started working on the idea that he should develop a machine which would help people reduce the workforce and lift the bricks to a few metres high.“Finally, I could successfully develop the machine which is now famous with the name brick lifter.”

Hussain said that it took me four months to develop my concept then I start the work to develop this machine which has been completed in 45 days," he said.

"The machine can carry three thousand of the bricks upon the second floor within one and a half hours with the help of two people," he added.

"I am charging 240 rupees for one hour. This machine can lift 24,000 bricks in one day which is very helpful for the people who want to save money. This machine is working on the electricity. It can also work upon the generator which is another advantage. It can be used in any area where electricity is mostly remain affected with the help of the generator," Hussain said.

"I am earning a good source of income through this machine. I am getting a good response from the people after seeing this technology has been introduced in the Kashmir valley. The people are also offering the work to me," Hussain said.