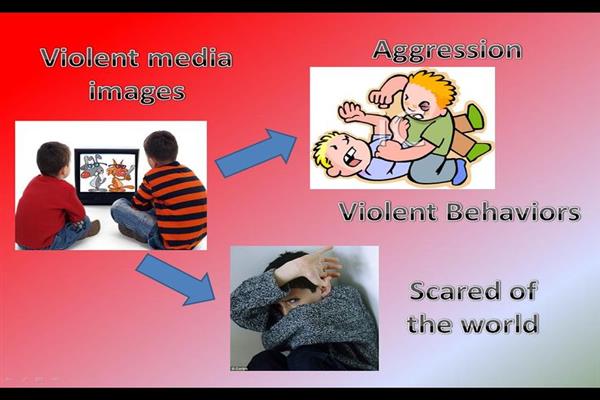 Twentieth century has seen an accelerating growth in technological advancements. It has seen the rise of mass media - television, radio, movies, internet, video games, and social networking. All these have become vital in our everyday functioning. With respect to COVID-19 lockdown, they have also become our solace on dull, boring days.

Media exposure has shown an enormous impact on our perceptions, values, and behaviours. Research has shown that media plays an important role in the child’s development. Research has indicated, unfortunately, exposure to violence through media (television, internet, video games), increases the risk of the viewers engaging in aggressive and violent acts (Hussman & Taylor, 2006). Scientific evidence indicates that society is at risk for higher levels of violence, as well as, building a greater tolerance and acceptance of violence. Bandura’s classic Bobo doll study illustrated children imitating physical attacks on inanimate objects that they viewed on the television. Social learning theories have provided explanations of the effects of media violence. Studies have shown that children below the ages of six, have access to media at an average of 2 hours a day. Likewise, children between the ages of 8-18 have access to media for more than forty hours a week (Lan et al, 2010). This has led to the inference that children are exposed to media most of the time.

Comprehensive researches have shown that exposure to violent video games increases aggressive thoughts, angry feelings, physiologic arousal, hostile appraisals, and aggressive behavior and decreases prosocial behavior (eg, helping others) and empathy. The impact of exposure of media violence has also been associated with maladaptive behaviour in adulthood. For example, a study indicated that men who had heavy exposure to media violence during childhood were more likely to engage in domestic violence than those who were less exposed. Similar results have been replicated in studies with women. (Levy & Orlans, 2000). Children may also experience anxiety or trauma as a result of exposure to media violence. Gory, or violent movies/shows/ games, may result in stimulating anxiety and fear amongst children. An example of the same would be the movie IT, where a clown was portrayed as someone who torments children. Media violence may lead to the impression of aggressive or violent behaviour being an acceptable way of conflict resolution. Children often have various different characters they see on television or movies, and idealise them. If they are constantly exposed to characters that engage in violent behaviour, they are likely to imitate that behaviour in a real-life setting. Research has shown that a majority of characters in movies and video games that engage in violence are not only glorified, but they do not show any remorse for their violence. Studies have also revealed that oftentimes violence is combined with humour, which may encourage children to adopt these strategies in a social setting.

The consequences of exposure to media violence have been mentioned above. It must be noted that these consequences vary according to age and developmental stage of the child. Preschool years, according to child developmental experts, emphasise the preschool years as a sensitive period for a child’s socio-emotional, cognitive, and behavioural development. In this period, children exhibit sensitivity to their environmental stimulus, and are most impressionable. In this stage, stressful experiences will lead to regressed growth, and maladaptive behaviour. Unmonitored media exposure will be a detrimental factor in the child’s growth and development.

It is critical for parents to engage in mindful behaviour when it comes to media exposure of their children. They must monitor the programs they show their children, and limit the amount of time a child spends on TV or other media platforms. Instead, they must be redirected to experiences that well help their development - sports, arts, etc. Reading must be encouraged in children. Studies have shown that children who read more are more likely to watch educational programs. It is important to foster communication with children in the case of exposure to media violence, and buffer negative messages by putting them in appropriate contexts.

In this day and age, it is impossible to control every aspect of violent exposure. The prevalence of media violence is a complex problem. It encourages fascination towards aggressive acts, and must be worked through on all levels in order to create a more healthy media environment. In conclusion, media violence significantly increases the risk of individuals to engage in aggressive behaviours in the long-run as well as the shortrun. Children have the tendency to automatically acquire the behaviors they observe around them in real life or in the media along with the emotional reactions and social cognitions that support these behaviors. Social comparison processes will lead these children to seek out others who behave similarly leading to a downward spiral process that increases risk for violent behavior.