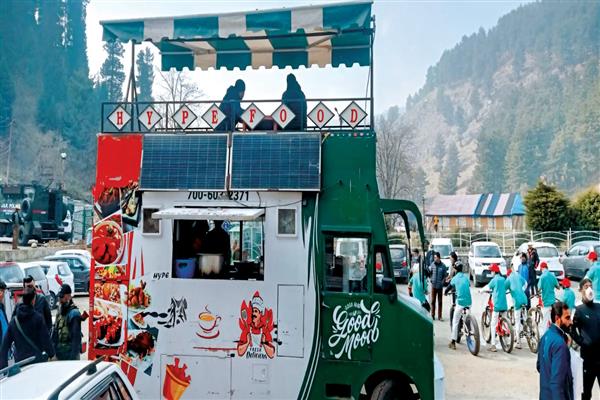 People in south Kashmir’s Shopian district are primarily dependent on the horticulture sector and businesses other than the horticulture oriented are given the least preference as a livelihood source, but a young boy decides to look the other way around.

Ovais Mushtaq Khan, 30, started his own business of a food truck that he stations at different locations on the historic Mughal Road and sells the food items. He is doing this for the past three years.

According to a government estimate, 90 per cent of the population in the district is directly dependent on the horticulture sector for livelihood.

Khan is a highly educated person and started his own business without looking for a government job. Khan holds an LLB degree from the University of Kashmir. Besides, a postgraduate diploma in Cyber Law from the sameuniversity, and a one-year diploma in tourism from Himalayan University.

In 2019, months before the abrogation of the special status of Jammu and Kashmir, Khan bought a movable food truck with the help of the Jammu and Kashmir Entrepreneurship Development Institute (EDI). Since there was a lockdown in place in 2019, which brought losses to the business community, Khan managed to keep his business running.

Strategically placing the food truck daily on Mughal Road brought profits as the visitors would look for some quick bites. Now he is expanding it further.

From his university days, Ovais Mushtaq Khan was enthusiastic about sports and remained captain of the district cricket team for many years.

“The businesses till date I started are very much related to sports and tourism. It gives me satisfaction to arrange sports activities and once I start any such event, I have seen a great response from the public, particularly youth,” he said.

He named his small food truck venture ‘Hype.’ The food truck has a capacity of 1000 items on road. This truck also has a rooftop where a sitting arrangement for 15 persons is made, besides an attachable rain shield.

“The idea of a food truck came into my mind after I saw no arrangements of food on the historical Mughal Road. Travellers had no choice other than to reach any town to have food so we took our food truck on the Mughal Road which gave tourists access to food,” he said.

He said that with the growing demand he bought another food van for the town area and both the trucks now do excellent business.

After seeing success in terms of food trucks, in 2022 he started his Hype Café near the old bus stand Shopian. According to Khan, this café is the first of its kind in Shopian, where they added some special Indian, Chinese and Western delicacies. “This café was started particularly for the people who hardly visit the city or other districts for the want of special dish due to their busy schedule or lack of resources,” he said, adding that he received an overwhelming response from the people of the town towards his café.

A fortnight ago, Khan started Hype restaurant at the famous tourist destination near Aharbal Waterfall in district Kulgam. He added that there was no food outlet offering such variety as his, so he started another restaurant at Aharbal. There are a few outdated Dabas, but not a proper restaurant.

“Since a lot of people from parts of India and foreigners visit this tourist resort, a sophisticated restaurant was a need of the hour. Once we started it, we now hope it will help in revival of tourism in the area as well as our own business, ”he said.

“The move was to promote the local tourism in south Kashmir. Since there are very less such outlets where treks and tours are being arranged, we found it an opportunity to both run our business as well as promote tourism so that the virgin trekking spots are jobs will be generated for the locals of these far-flung areas,” he said, adding that currently, they have trekking arrangements for over 50 trekkers.

He said that by organising such tours they don’t do all favours to their business but these activities help the participants to come closer to nature and know its importance. “It also helps to keep youth away from drug abuse which is our prime motive,” he informed.

Khan said that he also has his cricket team which last year was the top team ingovernment organised, Kashmir Premier League (KPL).

“There are around two dozen unexplored trekking and tourist destinations alone in Shopian and similarly around 15 in Kulgam and when government primarily has focused on major destinations like Gulmarg, Pahalgam or Mughal gardens, we took this challenge to promote the unexplored sites so that tourists can explore these spots and local businesses also get uplifted, “ Khan said.

Khan’s Hype has also an eco-camping site at Aharbal, which they often utilise for weekend camping.

He said that they have another office for arranging tours and tracks at Hirpora, which gives the easiest access for trekkers and tourists who want to track along Mughal Road and Pir Panjal Mountain range.

To give boost to tourism, he also arranges off-road driving in collaboration with the tourism and wildlife department, where participants are being rewarded both by the tourism department and well as Khan’s adventure club.

“Our Adventure club is first of its kind in south Kashmir which provides such number of quality rentals and vehicles to the trekkers,” he said adding that this year they are arranging camping for young boys and school children to train them against drug abuse, importance of forests, wildlife and water resources,” he said.

Khan said that the move was taken after taking expert advice to show children practicals which they have no access to in classrooms. He said once they take children to any particular camping site it becomes easy to make them understand the importance or demerits of any particular thing or task.

Ovais Mushtaq was last year honoured with the young leadership award by the lieutenant governor of Jammu and Kashmir, Manoj Sinha. He was among the youth who were presented with mementoes for their contribution towards relief and awareness regarding the Covid-19 pandemic in the district.

By spreading his business chain, Khan besides his gains has provided jobs to dozens of people. So far, he has hired 25 employees including chefs and trainers.