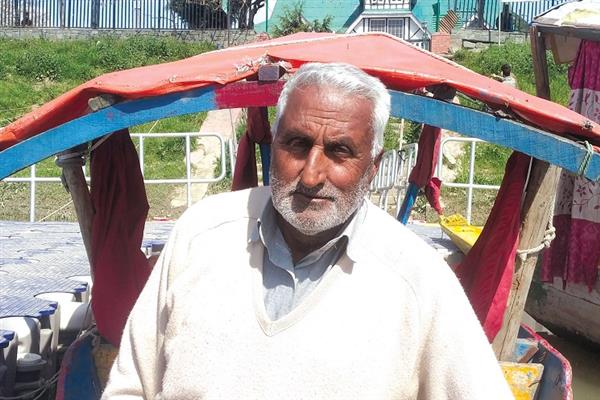 For decades, the river Jhelum has been acting as a lifeline for people of Kashmir. It originatesfrom Verinag area of south Kashmir and flows through Srinagar to Baramulla before entering into Pakistan.

The river was the main source of travel transport, tourism and trade route for the entire valley.Apart from the historic seven bridges in Srinagar, there were 26 ghats along the historic river but now only  few are working. In the city, thousands of shikara rowers would earn their livelihood by boarding people, tourist in shikara and drop them at their respective destinations.

With the coming of road transport and bridge connectivity, these shikaras in the Jhelum river started losing their relevance.

Abdul Rashid Khanday, a Shikara rower at Malik Sahib, Habba Kadal told Rising Kashmir that there was a time when Jhelum used to be filled with Shikaras from Pantha Chowk to Shalateng.

“It was the main source of income but their numbers dwindled as the government closed the gates of Dal and Wular Lakes in 1990s,” he said.

Khanday is among the last shikara rowers in Jhelum in Srinagar who boardspassengers in his shikara near Malik Sahib Shrine in Habba Kadal locality and later deports them to Ganpatyar temple on the other side of river.

He regularly comes from Noorbagh to HabbaKadal and fetches 250-300 rupees each day and earns his livelihood by boarding passengers from one side to another.

Khanday says there was a time when Jhelum water used to be crystal clear, it looked very beautiful. People used to go to Hazratbal shrine, Nishat Bagh, Shalimar through the waterways along Dal lake.

“We would board tourists, locals from Habba Kadal towards famous destinations of Kashmir. We used to work day and night and now the things have changed,” he said.

Khanday said in the past, it was mandatory for shikara owners to keep the banks of rivers neat and clean. There were harsh penalties on people who were found in polluting the river. Now the time has changed as solid waste is being dumped along its banks, he said.

“When boats were lifted, the river was polluted more. Today when we see from Anantnag to Baramulla, people are dumping their garbage along its banks.In upcoming years, it will become environmental disaster,” Khanday said.

Khanday said he has heard from his ancestors that kings would travel from Khanbal to Khadanyar through the river. The banks would bustle with music and dance to welcome the kings with a huge rush of people watching the scene,” he said.

“During 1980s government decided to set up two gates of Dal Lake which also block waters of Jhelum. The gates are now occasionally opened to release overflow waters from the lake,” he said.

Khanday said this decision was a turning point for Jhelum shikara owners as it led to their unemployment. From that period, shikaras could not enter into Dal lake, he said.

Over the period of time, the riverfronts have grown shabby, with dumping sites coming up around it burying in many ghats. Navigation on the river is defunct now.

President of Jhelum Shikara Owners, Mohammad Sultan Kuloo says over the past two decades, 98% of the shikaras have decreased due to negligence of government.

“Jhelum was looking more beautiful than Dal Lake as its waters are fresh. Although government promised many time its revival but things remained unchanged on the ground,” he said.

65 year old, Kuloo says a decade before there were 114 shikaras in Jhelum. They would travel from Khanabal to Baramulla for days together. Now only a few shikaras are left and we are among the last shikara rowers of this river, he said.

“I was born here and spent 24 years rowing the shikaras in Jhelum. Even a few years back there were 14 shikaras at Ghat no 03 near Masjid-e-Bilal and many left following the construction of footbridge at Rajbagh,” he said.

Kuloo says they are not against modernization but are of the view that Jhelum has the potential of water tourism in Srinagar. Many historical tourist places in city are situated along the river. It can boost the economy also, he said.

He said there are around 13 temples, 13 shrines, mosques and a gurudwara which sets a rare timeline on its river front. From the historic Maharaj Gunj market to old residential houses and historical structures, Srinagar has a lot to offer.

“Although government claimed revival of water transport but things remained unchanged on the ground as majority of the Shikara rowers have left their profession following the financial crisis,” he said.

Kuloo says river was the main source of employment for thousands of boat rowers who would take tourists to Wular, Manasbal, Dal Lakes, and other historic locations through the mighty river and they used to keep riverbanks clean also.

“The shikaras would pass through the interiors of the old city and since the early civilizations of Srinagar lived on the banks of Jhelum, the commuters caught sights of ancient structures. In places like Venice, water transport is a major tourist attraction,” he said.

Recalling the memories, Kuloo says they used to travel their shikaras along with the tourists to Wular lake, which would usually take 4-5 days. Jhelum was safe from poachers, its prosperity was restored. But they have no hope of returning to that time, he said.

“Even today, the movement of shikaras and motors boats will help put a focus on the city and infuse a fresh lease of life. If it becomes a permanent feature, it will be able to rejuvenate the old city. Tourist as well as locals can relive and reimagine the past, as it was centuries ago, he added.

The Jammu and Kashmir administration has laid the foundation stone for Jhelum riverfront development to be constructed on the lines of Sabarmati riverfront, turning its surroundings into ecologically sustainable leisure hubs.

Vitasta being the Venice of the East in Srinagar will be exhibited as a central attraction according to the Master Plan 2035. Its historic 7 bridges and 26 ghats will be restored in the same faith as they used to be upheld during ancient times.

The ghats on both sides of riverbanks will allow smooth water and river cruise transport. A mechanical system will be placed at Chattabal to maintain the water level at all times. The ghats are being visualized as a meeting point for cultural and commercial activities.

They will be architected for maximum public turnout with small shops, pop-up stores selling art and craft, chai and small delicacies, live music from local bands, and act as a hangout location for all ages.