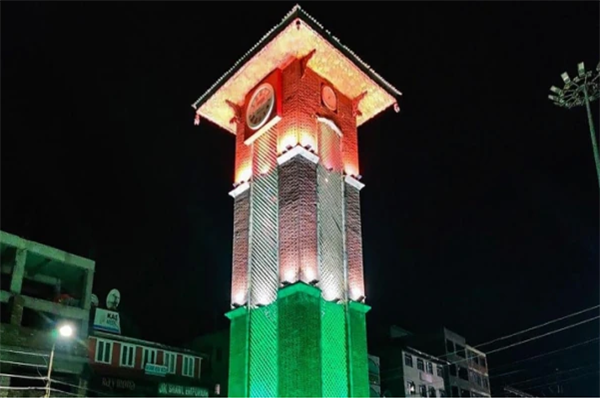 'Har Ghar Tiranga-Ghar Ghar Tiranga' movement launched by the Prime Minister Narendra Modi in connection with the 75 years of independence evolved into a real people's movement. This time on the occasion of the celebration of the 76th Independence Day on 15th of August, the whole country seemed draped in the Tricolour. People irrespective of age, status, region and religion celebrated the hoisting of Tricolour at their homes and in their institutions, colonies, towns, cities and states. The whole media, electronic, social, digital and print, was abuzz with the news stories and coverage of the hoisting of Tricolour especially during the three days between 13 and 15 August 2022.

There could have been no better alternative of unison of the country's men and women and exhibition of the concept of unity in diversity than the idea of hoisting the national flag by all on the occasion of the 75 years of our freedom. In fact, people didn't wait for the government's or political party's initiatives in this connection and went for celebrations from 1st August 2022 on their own. The movement was virtually 'hijacked' by the common citizens of the country who came forward willingly and voluntarily to make the celebrations a huge success.

Indians living in foreign countries also made it a point to contribute to the fanfare of the national celebrations during the period of 13-15 August in a big way. Though the Indian missions abroad also played a key role in this connection yet the non-resident Indians and the people of Indian origin made a special contribution to the movement by organising programmes on their own initiative. People in nations like UK, US, UAE, where there is a huge population of Indians, made a great impact in this context. They added a special flavour to the celebrations this time.

From high Himalayas to the huge oceans, hoisting of Tiranga was converted into a reality by our valiant security forces deployed thereat. Whether it was snow-covered Siachin or Pangong lake in Ladakh, high mountains of Uttarakhand or vast north-eastern lush green hills and jungles, Thar desert of Rajathan & Gujarat, coastal plains of south or the presence of our Navy in the Indian ocean, Tricolour made an impact everywhere. Officially, Lal Qila in Delhi remains the main focus of national attention always on 15th August but this time it was so infectious that Lal Chowk in Srinagar also got into the lime light for right reasons.

People of various backgrounds hoisted the Tricolour at Lal Chowk and celebrated the event with great enthusiasm. The famous Ghanta-ghar in Lal Chowk was a star attraction and it was beautifully illuminated in the colours of Tricolour. School children, civil and police administration as well as the common citizens took part in the celebrations throughout the valley of Kashmir depicting a positive change after August 5, 2019. The governments and administration wouldn't allow hoisting of National flag-Tricolour at Lal Chowk only up to a few years back due to the fear of law and order issues, and that unhealthy practice also comes to an end ultimately. The present dispensation deserves kudos for this, undoubtedly.

While colonies after colonies were seen observing the hoisting of Tricolour throughout the length and breadth of the country, people took keen interest in decorating their neighbourhood, temples and other places of worship, roads and buildings, parks and gardens on the occasion. A great message was taken to the minds of the people and especially the children of the nation regarding the history of our freedom struggle, spirit of nationalism, duties as a citizen and celebration of national festivals as a one strong nation. The PM's speech from the ramparts of Red Fort also emphasized this aspect very well.

Post the Covid-19 pandemic period, public celebrations this time after a gap of two years, added a great charm to the events related to the 75 years of our Independence. For the younger generations, which has taken a great interest in the celebrations this time, it would be important to know certain aspects related to our national flag, Tricolour. Every independent nation of the world has its own flag. It is a symbol of its independence and being free. The National Flag of India was adopted in its present form during the meeting of the Constituent Assembly held on the 22 July 1947, a few days before India's independence from the British on 15 August, 1947. It served as the national flag of the Dominion of India between 15 August 1947 and 26 January 1950 and that of the Republic of India thereafter, when the constitution of India was formally implemented. In India, the term tricolour refers to the Indian national flag.

The National flag of India is a horizontal tricolor of deep saffron at the top, white in the middle and dark green at the bottom in equal proportion. The ratio of width of the flag to its length is two to three. In the centre of the white band is a navy blue wheel which represents the Chakra. Its design is that of the wheel which appears on the abacus of the Sarnath Lion Capital of Ashoka. Its diameter approximates to the width of the white band and it has 24 spokes. The Ashoka Chakra, also called the Dharma Chakra, is placed at the centre and has 24 spokes signifying that there is life in movement and death in stagnation.

In the national flag of India, the top band is of Saffron colour, indicating the spirit of renunciation, strength and courage of the country. The white middle band indicates peace and truth with Dharma Chakra. The last band is green in colour shows the fertility, growth and auspiciousness of the land.

On 26th January 2002, the Indian flag code was modified and after several years of independence, the citizens of India were finally allowed to hoist the Indian flag over their homes, offices and factories on any day and not just National days as was the case earlier. Now Indians can proudly display the national flag anywhere and anytime, as long as the provisions of the Flag Code are strictly followed to avoid any disrespect to the tricolour.

There are some rules and regulations upon how to fly the flag, based on the 26 January 2002 legislation. These include the following:

The National Flag may be hoisted in educational institutions (schools, colleges, sports camps, scout camps, etc.) to inspire respect for the Flag. An oath of allegiance has been included in the flag hoisting in schools.

A member of public, a private organization or an educational institution may hoist/display the National Flag on all days and occasions, ceremonial or otherwise consistent with the dignity and honour of the National Flag.

Section 2 of the new code accepts the right of all private citizens to fly the flag on their premises. However, the flag cannot be used for communal gains, drapery, or clothes. As far as possible, it should be flown from sunrise to sunset, irrespective of the weather.

The flag cannot be intentionally allowed to touch the ground or the floor or trail in water. It cannot be draped over the hood, top, and sides or back of vehicles, trains, boats or aircraft.

No other flag or bunting can be placed higher than the flag. Also, no object, including flowers or garlands or emblems can be placed on or above the flag. The tricolour cannot be used as a festoon, rosette or bunting.

The PM in his speech from Lal Qila has amply set a target for the citizens of the country for the next 25 years and aspires India to become a developed country during the next 25 years. It is a target dear to all; and every citizen has a role in the nation building to achieve the set target. 'Ghar Ghar Tiranga-Har Ghar Tiranga' should actually be translated into peace, development and love for each other at all levels. 2047 is not too far away, when the nation would be celebrating the 100th anniversary of our Independence Day. Let us all focus on our next target to be achieved by all of us as a fully developed nation.