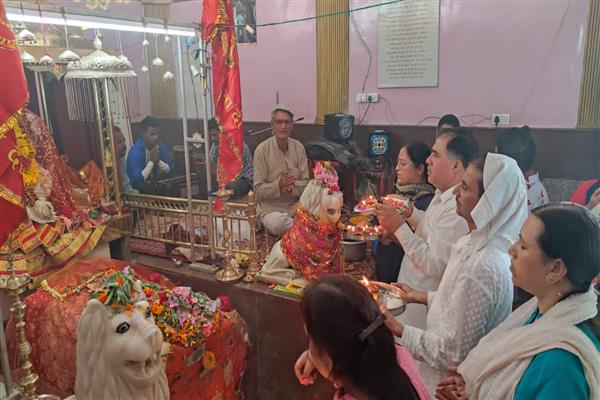 A number of Kashmiri pandits from various areas of the Union Territory thronged the temple to celebrate the annual festival, known locally as Haar TShodah.

The annual festival is observed to celebrate the birthday of Hindu deity Mata Jawala Ji.

Sunil Bhat, a Kashmiri Pandit who visited the temple, said, "since today is the birth day of our Goddess Jawala Mata Ji , all of us deem this day auspicious to pay our obeisance at the temple,” he said.

He said on the occasion they offer prayers and also prepare tehri, fried rice mixed with turmeric, and distribute it among devotees.

He said members from Muslim community helped them to make arrangements for the festival.

“I feel proud to say that this festival revives the centuries old composite culture of  Kashmir and strengthens the bonds of Hindu -Muslim unity.

“Local members from Muslim community stood shoulder to shoulder with us and also took part in the festival," he said, adding that without the support from members of the majority community they would have not been able to observe the day.

He also appreciated the local administration for making satisfactory arrangements for devotees.

Chander Mohan Bhat, a writer from Kashmiri Pandit community, said Jawala Mata, is also known as Zaala Bhagwati and the temple at Khrew is one of the ancient shrines of Kashmir.

He said that Jwalaji is the Isht Devi or personal deity of many Kashmir Pandit families.

"The birthday of Goddess Jwalaji is being celebrated on Ashad Shukla Chaturdashi, fourteen bright fortnight of July also called Jwala Chaturdashi, every year and a grand festival is being held at the temple," Chander Mohan said.

The octagonal shaped temple is located at an elevation on a hillock and is reached by a ladder carved of devri stones. As per an estimate there are 320 steps in the ladder.

The main sanctum sanctorum is a 12 feet by 12 feet square shaped structure. The ceiling of the dome is decorated with Khatamband design. The structure of the shrine resembles of the aspect and architecture of the pagodas of China, but the slope of the roof is straight instead of being concave

Kuldeep Kaul, a Kashmiri Pandit from Srinagar, said that they have faith in the temple and Pandits from different parts of the world arrive here to celebrate the birthday of Mata Jawala Ji.

They also greeted the Pandit community on the occasion.