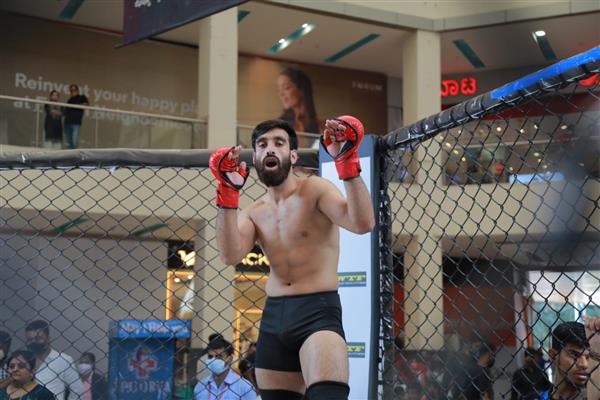 His Mixed Martial Art (MMA) techniques include Elbow strike, ground and pound, back control, arm bar, sprawl, a threat to his opponents allowed Owais to walk over in under 75 Kg weight category.

“Winning a gold medal in this mega competition is another milestone for me in which a total of 175 top fighters of the country participated,” Owais told Rising Kashmir.

“In the final fight I won by walkover as my opponent from Maharashtra withdrew prior to fight,” he says.

He achieved this feat in last week earlier this month.

Soon after turning 16, Owais started learning Thang-Ta and Karate, skills that helped him greatly as he eventually began his training in MMA.

After being inspired by Khabib Nurmagomedov in MMA, a combat sport, Owais started learning MMA.

“I had been watching Chinese and Japanese movies based on martial arts since my childhood, prompting me to opt for this art,” Owais told Rising Kashmir.

He has been working hard for past several years by repeatedly practicing countless hours to excel in MMA skills and techniques.

Owais says he has been seven times a gold medalist in Thangta and has also won the best fighter title among 28 states in India.

The youth from Murran has learnt the grappling and the ground-and-pound from Khabib, while McGregor has been his go-to for striking and kickboxing.

He learnt from both these international championships by watching their videos of their fights on loop. He keeps rewinding till he mastered each move.

“I would watch the fight of the duo and keep rewinding and slowing down videos again and again till I mastered the moves of both,” he says.

He says his only focus for the last several years was mixed martial arts (MMA).

Owais has also started his own academy ‘Lion’s Den’ in his native village in Pulwama where he trains 55 students at present.

His training starts in the morning and another session in the evening.

"I train for four to six hours each day. My primary focus is to keep myself up for the challenge and ensure that I also build my team who too can compete at professional levels,” he says.

"I am aiming for the Gold in the world MMA championship,” he says.