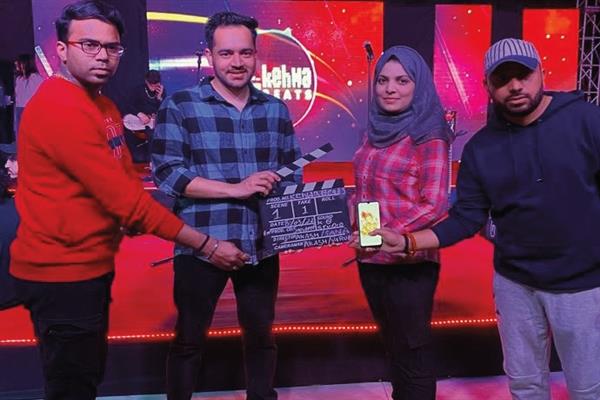 Kashmir Originals is the Kashmir based independent music label that has come up with the first-ever Kashmiri music series “Kehwa Beats”. This is a platform that tries to bring enthusiastic musicians and singers under one roof.

Speaking about this initiative, founder of Kashmir Orginals, Sanna Bhatt said that Jammu and Kashmir is famous for its rich and fascinating cultural diversity across the globe and has a significant element of its culture in Music, especially folk music. Folk music has been dominantly one of the colourful aspects of Kashmir's rich culture.

“To reminisce the beauty of Kashmiri folk,we has come up with the first-ever Kashmiri music series titled Kehwa Beats which focuses on featuring live studio-recorded music performances of the local artists who sing from their souls for the love of the Kashmiri language,” she said.

She said that Kehwa Beats is a platform specifically created to revive the rich folk music of Kashmir and promote the Kashmiri language at a global level.

While talking about her journey in this field, she said, “I have been much connected to Kashmir and our culture since childhood and I always wanted to make a small contribution toward protecting and reviving our rich cultural heritage. I think it’s my eternal love for Kashmir, our culture & language which inspired me to start the journey in this field.”

Sanna also said that the motive to start Kehwa Beats is an attempt to revive, propagate and promote the rich folk music of Kashmir, which has had a rich history of existence with local music instruments which dictate Kashmir's musical palette.

In the first season of Kehwa Beats, Sanna said, “we have tried to blend two languages i.e Rajasthani & Punjabi from mainland India with Kashmiri folk songs because we don’t want the Kashmiri language to remain confined to Kashmir only but we want to promote it globally.We will try our best to bring artists from other parts of the country too to collaborate musically with local talented musicians”.

She believes that across the world, famous labels from various nations are representing and promoting their culture, art &legacy through the means of music.In the same spirit, Kehwa Beats aims for the first time to implement the same style of musical madness in Kashmir - blending traditional Folk with contemporary genres.

“Songs performed in Kehwa Beats are a fusion of folk music with contemporary hip hop and pop music because we believe that giving a contemporary touch to traditional music would gain Kashmiri music popular among the masses, especially the youth,” she said.

Sanna believes that the youth can bring positive changes & being the youth herself, she thinks it’s her responsibility to contribute towards society in whatever way she can.

“Every musician from Kashmir whether emerging or established is an inspiration in itself because despite the predicaments, lack of infrastructure and platforms our musicians are taking the bar of the Kashmir music industry so high,” she said.

On being asked how she pick and pair singers for Kehwa Beats, she said,“we contacted popular singer and music composer Kabul Bukhari for the composition of songs. Overall it was teamwork to decide which songs to choose and which singers would collaborate to sing a particular song so that we could bring the best pairs suited for the songs.”

Sanna said that the locals proudly call this music series "Kashmir's Own Coke Studio.” As a region rich in music, culture, talent, and art, it lacked a platform, which the Kashmir Originals to some extent has tried to provide.

“It is astonishing to witness praises for one of the very few female singers of Kashmir, Zartasha Zainab, for her outstanding performance of the famous Kashmiri song Lalas wantai priorly sung by Bollywood singer Asha Bhosle.The song has received more than 2 lac hits on YouTube in two weeks,” Sanna said.

In her message to the Kashmir youth, Sanna said, “Whatever we achieve in our lives or wherever we go we should never forget our roots. Follow your dreams and aspirations with dedication & always try to contribute to your people & culture positively.”