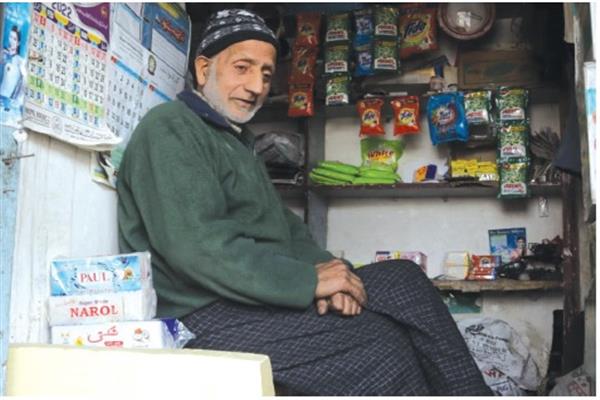 Though he fiercely guards the secrets of his trade and does not let people into his workshop where he makes the last of traditional Kashmiri Mandan soap, Abdul Rashid, 60, is one of the last remaining individuals who are still into the traditional soap making in Kashmir. He is the last link in the long chain of traditional soap makers of Kashmir, who have all been rooted out of business in the past couple of decades by the commercial soaps that were promoted by fancy men and women in television ads.

Rashid’s shop, modern Kashmiri soap, is located in Srinagar’s Khankah area and has stood there for thirty years now after the original soap maker of that place, Haji Ghulam Rasool passed away and took the secrets of his trade with him to the ground.

“My cycle shop was right next to Haji Sahab’s shop. I had developed a very strong relationship with him for over twenty years then. Before he passed away in 1990, he told me that his legacy would die with, because he did not have any sons. So, I promised him that if God wishes, I would keep his legacy alive and forward the soap making in Kashmir,” Rashid reminisces about his foray from a cycle mechanic to a soap maker. Rashid’s cycle shop is still situated right next to his modern Kashmiri soap—a dingy and rundown 4 by 6 space.

Since it was the death of Haji Ghulam Rasool that revived the spark of that promise made to him many years ago, Rashid had no clue how to fulfill it. He did not possess any knowledge of the know-how of soap making. Pertinently, it took him two years of struggle, a great deal of experimentation with various items, and immense patience to come up with a perfect Mandan soap. Once he had come through, he put up a board on top of his shop and it proudly read: Modern Kashmiri Soap. This was both to celebrate his triumph and carry the original soap maker Haji Ghulam Rasool’s legacy forward.

“I went to various places and spoke with hundreds of people before I succeeded in making a perfect soap,” Rashid adds triumphantly.

Thanks to Rashid, Khankah has been a one-stop place for traditional soap in Srinagar for thirty more years. Before him, Haji Ghulam Rasool had run his famous soap shop for almost sixty years at the place.

“Back then, when I started, with one paisa you could buy 250 Grams soap. At that time, the idea of modern soaps was not there and people only used the traditional soaps,” Rashid comments.

According to Rashid, back then, Khankahai Moula was famous for four things: Kozgar Arq, Kashmiri soap, Desi butter, and Hakeem Ghulam Rasool. While the lateral two are barely struggling, the former two have succumbed long ago.

Rashid is not aware of whether the same fate awaits the traditional soap. He is not sure that his son would carry forward into the soap making and help it sustain for a few more years. However, he sincerely hopes that if not his son, maybe one of his grandsons would carry the legacy forward. This is the reason why he has kept his workshop shut to the prying eyes of people. The secrets of the soaps are fiercely guarded.

“The reason we fiercely guard our trade secret and refuse to allow anyone to witness the making of the soap is because we want to maintain the monopoly on the soap. When a plethora of people enter a trade, many tend to resort to adulteration and malpractice, and eventually reduce the importance of the business. Since it’s in my hands, I would not let that happen to the soap,” Rashid says while speaking about his reasons to retain the monopoly. Though he might be right in his own way, he isn’t certain that the soap would retain its relevance down the line in the future. The soap is not in wide use as it used to be once.

“The last few remaining people who are into the Namdah making would not be able to make the traditional mats without our soap. From all over the valley people come to us to buy the soap because, without it, the Namdah could not be made,” Rashid added.

Rashid’s traditional soap is developed from the chemicals that he buys from many places across India. Although in ordinary market soaps, animal fat is used, Rashid says that he makes the use of only oil in the making of his soap, and it makes his soap immensely better than other soaps in the market.

“In our soap, we only make use of oil, not fat because it degrades the quality of the soap. Also, all work is done with hand, no machinery is involved.”

There are many types of soaps that Rashid makes, including one separate kind of soap for washing and another for body use.

Rashid has still many loyal customers, and they are the ones that help him sustain through. The sales are not the same as they used to be once upon a time. Often during the year days at Khankah Moula Mosque, he is visited by many of those old customers.

Rashid says that his soap is very useful in treating hair dandruff and many people are loyal because of that.

“our soap is not adulterated. It’s a better soap than the soaps that are in the market. It works magic in reducing the stains on the clothes and getting out dirt,” Rashid adds while praising his soap.

While giving out a message to the people, Rashid says that the work should be honest and right, “only then the God gives prosperity; profits should be within limits and mercy must be in our hearts.

“Your items should also be pure and not damaging to the people. It's not good to earn money at the cost of human life,” Rashid adds.