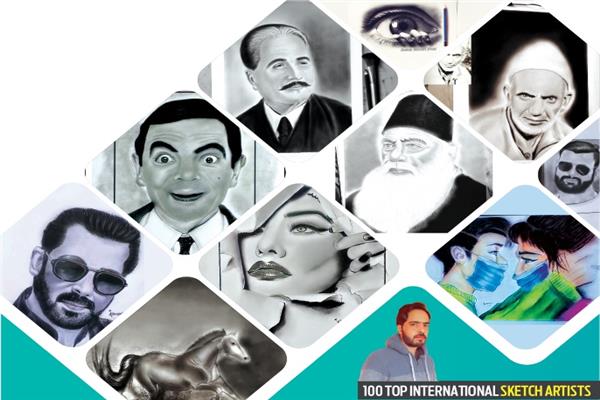 Kamran Khan was always good at making diagrams and drawing during his school days. He would often take part in different drawing competitions which many times fetched him appreciation from his teachers and peers.

28 year old Kamran had never thought of becoming a sketch artist but one day seeing a sketch and portrait artist, Manzoor Ahmad Bhat’s work touched his heart and he decided to start sketching for which he always had a good hand. He would have neverthought that one day he will make it to the list of 100 top international artists.

“Despite the fact that I was good at diagrams and drawing in my childhood, I never paid attention to choose it professionally,” he says.

He initially started practicing rough sketching for almost one year.“It has been five years since I have been sketching and I learned everything by myself,” Khan says.

“Initially I was not interested in sketching, however, at school, I used to take part in drawing competitions and in practicals, I used to top among peers. But I never thought of becoming a sketch artist. As my aim was to become a teacher,” he says, adding, “But Almighty’s plan was different from what I had thought; after giving five years in teaching I eventually ended up becoming a sketch artist.”

Despite being a self-taught sketch artist,Khan made it to 100 top international artists’ list, recently. He achieved this feat in the “First International Online Art Competition” in painting, drawing, sculpture, calligraphy, and digital art organized by Callisto Art and Culture which was sponsored by International Art Studio.

His artwork is being shown in the National Online Art Exhibition from March 12 to March 23, the event is organized by ‘Manikarnika Art Gallery’ under the title ‘Colours of Joy’.

Hailing from Kathpora Baharabad Hajin in north Kashmir’s Bandipora district, Khan has received his Intermediate education from Government Higher Secondary Hajin and Bachelors in Arts from Government Degree College Bemina and did B. Ed from Qamarya College of Education Ganderbal.He is currently pursuing Post graduation in Kashmiri from the University of Kashmir.

“After completing my B.SC, I joined the private sector and started working as a teacher in a private school in district Ganderbal. To become a teacher was my dream since childhood,” Khan told Rising Kashmir.

He says that he worked in many private schools against a meager salary which forced him to leave that job as it did not help him to meet the basic needs of his family.

“I was good at drawing and sketching from childhood but never thought of taking it to another level as I was immensely interested in teaching rather than in sketch art,” he says.

Khan says that his teacher in sketch artworks is his daily hard practice.“My inspiration in sketch art is practice. I kept practicing day in and day out till I mastered the art by myself,” he said.

He believes that sketch artists have come into the limelight for the past two years through social media.

“If we go back some three to four years, we will see no one would know about sketch art in the valley, not even on social media, which now has turned into a platform for everyone to showcase their talent across the globe.”

While talking about his favourite artist, he says, Jammu-based Shubam Dogra, who is known to people through social media, is his favourite.

Khan wants the Jammu and Kashmir administration to come forward and provide them with an art academy where they can teach this art to budding artists of the valley, which he believes will also improve their financial status.

Talking about his current sketch work in process, he says he is working on a hyper horse sketch work.

He has sketched hundreds of sketches and portraits which include sketches of Bollywood celebrities, international cricketers, famous poets, Islamic personalities, sketches of animals, etc.

Starting from rough sketch work, Kamran then worked on charcoal based sketches and gradually used colors.

“Now, I have mastered every medium in this art. And I am proficient in charcoal sketch work, pencil work, acrylics, and watercolor based sketches,” he said.

Talking about the time taken by each piece of artwork he says that it depends upon the type of sketch one is working on and hours of hard labor one puts in different types of sketches, which usually vary from an hour to two months to finish an artwork.

Khan says that he had to struggle a lot throughout his journey as an artist but he kept improving with time.

“To master this art I started with making a lot of cartoons type sketches, the more I practiced, the better my sketch work got,” he asserts.

While giving the message to the youth he said that the Almighty has bestowed everyone with some unique talent they should recognise it and work on that.

“There are a large number of educated youth in the valley who rely on public or government sector jobs for their employment, failing to get appointed makes them stressed leading them to find solace in drugs which is disastrous for the society,” he said.

Kamran has also created a Youtube channel “Kamran Sketch Art” where he teaches aspiring sketch artists from his vast knowledge.