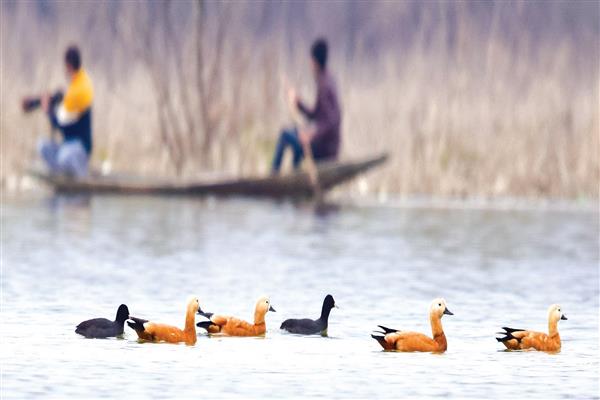 Following the seasonal transition, Kashmir’s avian visitors have once again kept their winter tryst with the valley and landed at their abode in Srinagar’s Hokersar wetland reserve. As of now, more than one lakh birds have arrived from Siberia, China, central Asia, eastern Europe, and various other inclement terrains. Amongst these waterbirds, the Demoiselle crane has landed in Kashmir for the first time in recorded history.

Falling in the Central-Asian Flyway zone, Kashmir, since the dawn of time, has been a home of various migratory birds during the winter.

Salim Ali, one of the most celebrated ornithologists of the last century, is known to have called Kashmir “heaven on earth for migratory birds“.

In the coming days, it's anticipated that nearly one million more migratory water-birds would arrive in Kashmir to spend their winter at Kashmir’s water bodies such as Dal lake, Walur lake, Hokersar, Shallabugh, Hygam, and Mirgund wetland reserves. Once the spring would return, they would shake the Kashmiri weather off their wings and take a flight back to their respective summer homes in Central-Asian Flyway range states.

The arrival of Kashmir's avian visitors starts from late October up to the ending of November, and then the departure begins from April onwards. Sometimes, some populations of waterbirds such as Greylag Geese make their arrival in December as well. But despite the time of arrival of these birds, Kashmir is always a welcome place for them – rather in love with the riot of colors that they bring to its wintery white and the cacophony that they add to its snowy silence.

Although for a small population of the water-birds Kashmir is only a transitory camp en-route to their wintery quarters in the temperate plains of India and other South-Asian countries, for a vast majority, Kashmir is the only home during winter.

For the transitory birds, however, the Kashmir arrival occurs during September and October and then they return around February for the reverse migration.

In the Geese family, there are mainly two species—Bar-headed Geese and Greylag Geese. Whereas, in the Coot family, only the Eurasian Coots come to Kashmir while running away from the inclement regions of Siberia, Tundra, and Europe.

In Kashmir, starting in September, it’s always a ritualistic behavior where the Bird-watchers, Photographers, wetlands authority, and even poachers stick their eyes in the sky and await the arrival of migratory birds. For all of these people, the waterbirds mean different things.

While speaking with Rising Kashmir, Suhail Qazi, warden and wild-life Ranger Hokersar Wetland reserve said, “In anticipation of the arrival of the birds, we have made a lot of preparations this year. We sealed off the seepages and built temporary bunds and dykes to increase the level of the water in Hokersar. This year, we were very eager to make their stay in Kashmir comfortable and easy. As of now, more than one-lakh migratory birds have arrived, including Mallards, Pintails, Shovelers, Poachards, and common Coot.”

In the coming few days, the authorities are expecting almost a million more water-birds in the Kashmir valley. The excitement is particularly seen in the bird-watching community in Kashmir. Many bird-watchers across India and the globe have already scheduled their visits to Kashmir during December and January. Hookersar, being the prime hotspot of the migratory birds in Kashmir, features predominantly on their must-visit places.

Akib Muslim, a writer based in Kashmir says, “the arrival of migratory birds is another aspect of Kashmir’s natural bounty and the spirit of serendipity that the valley can offer. And it adds a romantic stanza to the beautiful poem that the Kashmir valley is.”

Although many waterbird species are known to have always kept their winter tryst with Kashmir, some birds have been known to visit Kashmir only occasionally or only once in a while.

Though exotic, as it may sound, according to experts, it is not a healthy sign.

The experts say that these changes in the addition and reduction of the species is an indicator of bad health of the migratory waterbird habitats along the Central Asian Flyway Zone.

According to Naqash, "the reason behind these additions in the bird species can be that they found their respective winter habitats inhabitable and decided to migrate to Kashmir for the winter. It happens in Kashmir as well, when the severe winter freezes the surface of the water-bodies and some species from Kashmir’s migratory birds, such as Grey-lag Geese and Bar-headed Geese, migrate to Jammu’s Gharana wetland for a week or two."

Though it isn’t a common perception, according to the experts, the birds tend to be very adaptive and intelligent.

However, for those water-birds who stay faithful to their tryst with Kashmir, the authorities come to rescue. When the temperature drops below zero degree centigrade and the surface of Kashmir’s shallow-deep wetlands freeze solid, the authorities get to the task of cracking the slabs of ice and feeding the birds with Paddy grains.

Sacks of paddy grain have already been stocked at Hokersar guard-house in anticipation of this yearly occurrence. When the time of the freeze would come, the officials would board their Shikara boats with a sackful of paddy grain and row into the wetlands. Since wetlands are vast and hard to traverse, they make clusters of pools across the surface and shovel the grain into the water.

Qazi, who has been the warden of Hokersar for the past two years says, “when Chilai-Kalan (the harshest 40 days of winter in Kashmir) arrives, the surface of most of Kashmir's wetlands freezes. It makes it hard for the birds to have access to food in the water, therefore, it falls upon us, both as a moral and human responsibility to make sure that they don’t starve and are regularly looked after.”

However, the freezing water bodies are not the only factor that gives these avian guests a tough time in Kashmir; habitat degradation, unsustainable water management, lack of law enforcement, conservation capacity, and uncontrolled hunting are some critical factors that put the populations of migratory water-birds in peril.

Jammu and Kashmir has nearly 3,754 waterbodies, while only a few have been declared protected wetlands, and it results in the prejudice of care and importance. Caused by predominant factors like climate change and urban expansion, almost a majority of the wetlands in Kashmir have been shrinking at a phenomenal rate.

Hokersar wetland in particular (according to some reports) has decreased from 19 Sq. Kms in the 1960s to only 12.8 Sq. Kms at the present. The same is the condition of other wetlands and regular habitats of the migratory birds in Kashmir.

Nevertheless, the regular arrival of these migratory birds has somewhat ensured that the wetlands of Kashmir, especially in Srinagar, do not disappear completely from the map. The water birds have invited significant attention towards the wetlands.

Kashmir falls under the Central Asian Flyway zone, and it covers 279 populations of 182 migratory waterbird species, including 29 globally threatened and near-threatened species, which breed, migrate and remain in winter within the region. Many water-bird populations are declining rapidly due to the loss of habitat.

Pertinently, illegal poaching is another major concern that threatens the survival of these migratory birds in Kashmir.

According to Qazi, he alone has confiscated nearly 27 Gauge-rifles in the past two years from poachers, including both double and single barrels.

“Additionally, we have ceased several Mojo’s (Motion Decoy), Snares, duck-hunting waders, and speakers that are used to mimic the birdcalls by poachers,” Qazi says in a worrying tone.

“Under my watch, a large number of individuals have also been booked during these past two years in the poaching cases under Indian Wildlife Act 1972,” he adds further.

According to Wajid Lone, a reputed Bird-watcher from Jammu and Kashmir’s Kangan, peaching in Wulur lake remains completely unchecked. The lake besides being a prominent habitat for the endemic and native water-birds is also a winter abode for a large number of migratory birds.

“Wular, being the second largest freshwater lake in Asia makes it impossible for the authorities, because of its sheer size, to quell the incidents of poaching," Lone adds.

According to Lone, Swimfins, one of the special populations of migratory birds in Kashmir, were being sold like chicken last year. He also recalls the incidents of poaching of Tundra Swans and regrets the treatment that was meted out to first-time guests.

The warden also says that the poachers that they are dealing with are using hi-tech gadgets and most of them come from well-off families, which makes it even hard to deal with them.

“Since hunting was once a sport of the royalty, many well-off youngsters are attempting to imitate the nobility of the past. The said people have developed such a strong addiction to killing the birds that they can spend any amount in service of it. Many of the poachers have imported hi-tech Mojo’s and snares from foreign countries for ostensible amounts. Yet for what, for indulging in the sport of killing the migratory birds,” Qazi, the warden of Hokersar says.

He also says that last year, an elderly woman from Zainakoot, a neighborhood near Hokarsar, called him and thanked him for deterring the poaching in Hokersar. According to the woman, her son was spending one-lakh rupees every season on the purchase of cartridges alone.

“We as a society should be aware of the ecological role that these migratory birds play in our environment. We must realize that insensible behavior brings insensible destruction. These populations are at their threshold level and they are the indicators of our habitats. They are the ambassadors from different countries and we have to acknowledge their role; protect their habitat, their living, because that is the future,” says the wild-life warden.

According to Irfan Jeelani, the founder of Birds of Kashmir, a popular birdwatching club, the migratory birds also present an economic opportunity for the Kashmir valley.

“Bird tourism is a developing trend around the world. There is a sect of people who come to Kashmir for our birds from various countries and states. So, there is a potential there that we can harness,” Jeelani adds.

Agreeing with Jeelani’s comments, his colleague, Wajid Lone says that, “while it’s important to utilize this economic opportunity that the bird tourism presents, it is also imperative at the same time that we do not disturb the habitat of these birds.”

According to Lone, when Eurasian long-eared owl, a migratory bird population, visited Kashmir a couple of years ago, a lot of people started to approach their habitat near Manasbal lake. Unfortunately, it resulted in the bird leaving the habitat and never returning.

“An undisturbed atmosphere has to be created for the birds because disturbances often dissuade the birds from migrating. Birds must feel safe, poaching often dissuades migratory birds from migrating again to the disturbed spaces. Even we, as birdwatchers or bird lovers, always approach the bird habitats cautiously, because we understand that the birds are very private about their space and it needs to be respected,” Lone comments.