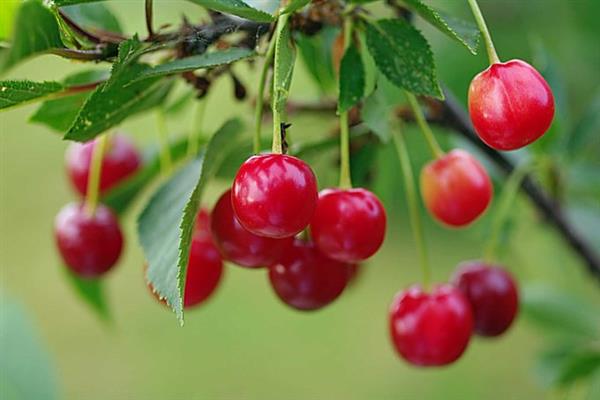 Among the Kashmir fruit varieties, cherry is being considered one of the vital fruits lately. Its growth provides a mid-year economic relief to the orchardists and labourers when all the means of income from the horticulture sector are shut since most other fruits are being harvested in the autumn season.

The history of growing cherries is not new to the valley. However, it witnessed a setback for around a decade between 2007 to 2017 due to the frequent rains by the end of spring.

But once the high-density varieties were imported from Italy and Holland few years ago, the sector got revived and lots of people have opted to grow the fruit in many parts of Kashmir. This has contributed to keeping the horticulture-dependent economy of the valley afloat and ticking.

In Kashmir over a dozen cherry varieties are being grown which include Mishri, Dabal, Siya, Awal-number, Italy, Jadi and Makhmali. Except for Dabal, all the cherry varieties develop red colour in ripening which is being much liked in parts like Maharashtra and Delhi of the country.

Kashmir on average grows about 15,000 metric tonnes of cherry every year. Shopian in south Kashmir and Ganderbal and Srinagar in central Kashmir are the biggest producers of cherry. After the induction of high-density cherry varieties, the fruit is being produced almost in all districts.

Muhammad Rafiq Khan, a fruit trader from Pulwama said that the early ripening varieties don't fetch good rates because of quality issues. "Once the good quality varieties get mature, it is being sent to father Mandis unlike the early varieties," he said.

He said that so far, they haven't witnessed any upward change in market rates to the large footfall of tourists.

The high-density varieties according to experts are not only resistant to rain but also fetch bumper crops within a few years of plantation.

“We used to grow around 3000 cherry boxes before 2010 but when the rain-affected production for many years, we cut the trees and planted apple trees at those spots. But once the high density was brought, it provided us with a great opportunity to boost our income again,” said Sayar Ahmad, an orchardist from Losedenow village of Shopian.

Losedenow is one of the major cherry producing villages of south Kashmir and almost all varieties of the fruit are being grown in the village. The locals are busy picking up the siyah variety, which ripes first in the season.

Since orchardists are free in the season between the end of spring and the beginning of autumn, there used to be less opportunity for manual labourers. Once the cherry sector got a boost, it is providing jobs to hundreds of labourers. Guest labourers from other states of the country as well as the Rajouri district of the valley could be seen with baskets in the cherry orchards of the Losedanowvillage. Early in the morning, the main chowk of the town is filled with these labourers looking for work.

According to orchardists once they started growing cherry, they get mid-year income which helps them both in bearing expenses on fertilizers and fungicides without taking debits which they previously used to take till autumn.

They said that it also helps them to run their daily affairs in terms of money smoothly.

According to the official data, the years 2020 and 2021 were excellent for cherry fruit as the weather in both years remained pleasant for cherry production. In 2021, a kilogram of the cherry box was sold between Rs 150 and 220 at the doorstep and these rates are being considered the highest during the last decade.

On the one hand, the covid19 pandemic brought heavy losses to the Indian economy, and the Kashmir horticulture industry also became its victim by restricting the tourist footfall in the valley who used to buy a large chunk of cherry on their visit to Kashmir. Fruit growers this year are hoping for good market rates due to the record tourists visiting Kashmir, this year.

The J&K Government’s 25 per cent subsidiary on transportation of cherry via air and refrigerator trucks last year gave a boost to the cherry production. By this scheme, the fruit reached different parts of India in a short time hence saving the fruit from spoiling.

The scheme also helped to take the produce to larger people and farther locations and once the fruit reached a larger population, it saw good demand and in turn good market rates.

Muhammad Amin Pir, President of Mega fruit Mandi Aglar Shopian told Rising Kashmir that this year's rates of cherry are low compared to last year. He said that the bumper cherry crops this year and rainy weather could be possible reasons for the decline in rates.

“We hope the rates will rise once the top varieties of cherry are harvested and weather conditions improve for the fruit,” he said.

Pir said that more focus should be given to high-density cherry instead of apple since the Kashmir land is fertile enough for the best cherry production. Currently, the rates of cherry are Rs 60 for Siya, Rs 80 for Makhmali and Rs 120 for early Italian variety, he added. Even the good tourist inflow to the valley hasn’t helped in improving the rates.

Muhammad Irfan Mir, an orchardist from Ganderbal said that the frequent rains over the last many days may adversely affect their crops. He said that most of the produce in his area has ripened. The frequent rains during the preceding weeks had led to cracks in his produce, thus spoilt it. That will fetch him nothing in the market, leading to an economic loss like in earlier years.

According to official data, Kashmir produces over 15 lac metric tonnes of cherry, making it the highest cherry producing state in the country. Jammu and Kashmir have a total of 2317 hectares of land under cherry cultivation.

Cherry is one of the first fresh fruits to be harvested by the end of May month and ends by the conclusion of June.

Bashir Ahmad Bashir, President of fruit and vegetables Mandi ParimporaSrinagar told Rising Kashmir that last year's losses to cherry processing owners are the main reason responsible for the rate decline. He said that food processing units were unable to sell their products during the last two years due to pandemics and lockdown.

However Mega fruit Mandi Aglar Shopian is one of the major Mandis in south Kashmir which besides the sale of district produce witnesses a huge number of cherry boxes from central Kashmir's Ganderbal, Srinagar and Bandipora.