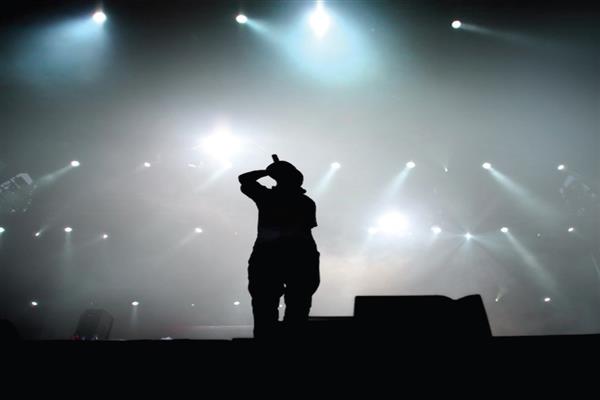 In Kashmir, hip hop or the rap music genre is gaining popularity among youth. By playing with lyrics and doing magic with music, many performers are making their own space in the emerging music genre.

Born in 2001, Ehan Syed is making hip hop music from last 7 years. After listening to Eminem’s Love The Way You Lie and tracks like Rap God and Lose Yourself, Ehan was inspired to give beats to his emotions.

20 years old rapper goes by Ehan as his stage name. He said hip hop to him has been a life savior to battle though depression and mental stress. Being bipolar in recent years, hip hop has got him out of his inner conflicts and gave a productive shape to his life. Through his songs he expresses his fights with depression and anxiety, his feeling as a kid in school days, and stereotypes of society.

“To me it’s a feeling, the craft itself is an emotion, an expressive art form that lets you be yourself and talk about your own struggles, ambitions and skills in patterns that people are forced to nod their heads to,” he said.

To polish his skills as an artist, he listens to rappers like Eminem, Tech N9ne, NF, Hopsin and the list goes on. Believing in improving skills with each track, he uses multi-syllable rhyming patterns, flow switches, tongue twisting chopper style and other techniques which makes him feel energetic and inspiring about his songs.

“Hip Hip is so strong that it connects people and makes them vibe together. It’s phenomenal when made properly, I want people to look at my skills as an artist and be inspired to do what they love most because at the end of the day, hip hop is a motivation like no other,” he said.

Being a school dropout, after passing 7th standard, Ehan had a feeling of choosing hip hop in his life as a career. Earlier his parents were disappointed with his decision but later on watching him working hard and his passion for hip hop changed their opinion.

Ehan has faced negativity from the society but has never cared much about it. “When people see something new, they are always going to react with a negative attitude and sadly that’s just been the way of our world. So, I don’t let anything stop me for doing what I do. People call out rappers as if they are doing satanic rituals and stuff but those are the same people who have music in their weddings, whether it’s traditional or Bollywood. To me those people are always going to be hypocritical with their behavior and have no real value of opinions in my eyes,” he commented.

Doing hip hop in Urdu and English language, his mission is to representing Kashmir hip hop on an international level and that’s what he is working towards. “I saw that the world is big and I should do something that the whole world can appreciate,” he said.

In school days, Basit Mir used to get angry while watching kids getting bullied. To protect the kids, he would fight with the bullies and as it progressed before he knew it, he started getting fights with everyone and was blamed for all the things that he didn’t even do. Being labeled as bad person and singled out by all, frustrated him. “That got me sick of society because all the time they focused on my flaws and never on the good. During those days, I got much stressed and my parents were also worried,” he said.

Being friends with people who were on drugs, he too started taking drugs to get an escape from reality. Little did he know that it will make things worse for him. Getting betrayed by his friends who complained in the school for having drugs in Basit’s bag, he couldn’t bear the fact and started isolating himself. He said, “I got depressed and I started listening to Eminem. I went crazy. I could relate to everything he said. It made me feel I wasn't alone; I saw similarities between him and me and it made me better day by day.”

Gradually he started feeling that he could help people the same way as Eminem helped him and he started writing songs about his feelings. “I thought I should spend time on writing. Before that, I couldn't do anything about my problems, but I wrote about them. It made me feel as if the problems were transferred from my mind to paper,” he said.

He started studying about hip hop. The way his favorite rapper Eminem created rhyme schemes, the way he created flows, his lyricism and started listening to other artists and exploring hip hop. He said, “I learned how to rap but I didn't know anything about recording or mixing and mastering. So, I downloaded FL studio on my laptop, the same one I still use.”

Penning down poetry sung by his grandmother who is a Kashmiri poetess inspired him to represent his culture. “I always wanted to represent my culture. If I was to be known for something, I wanted it to be my culture,” he said. Having no money to record his debut song in Kashmiri "Kale Chot" in studio, he sold his guitar.

Basit noticed Ehan’s song on Instagram one day and felt both of them are passionate about the same thing.

He said, “We appreciated each other’s music. We started talking daily about hip hop and became friends. I decided to record in his studio. When I met him, I saw that we were similar with same thinking. When I finished recording, he didn't charge any money from me, he said he couldn't because he respected my art too much.”

Since the time Ehan-Econ is a popular hip-hop duo who work together, became a team and are best friends now. “We started rap battling each other and collaborating with each other. Even my parents were satisfied because instead of drugs and fights, I was focusing on something worthwhile, music. So, they helped me make a home studio. Then I started recording my own songs,” he said.

Hip hop for Basit is a way of living, writing about good and bad. As a hip-hop artist, he faces many challenges, little opportunities, too much hate and no support. He said, “People treat us as if we are not normal, as if we are aliens, completely different from them.”

While perusing Bachelors in Commerce, he runs his own studio and record songs for other artists. “It's hard to manage both of these together but for me, an easy life is depressing and frustrating. I like challenges,” he said.

Sayyid Burhan Hamadani grew up in the tight alleys of Downtown Srinagar and got introduced to the game of rhythm and poetry. He said, “I was in 3rd grade and started loving hip hop music ever since, I still remember some lines I wrote back then Phoolon Ka Shehar Jispe Aaya Hai Kehar. Yeh Basti Hai Woh Jisse Kashmir Kehte Hai. Yeh Basti Hai Woh Jaha Log Dukh Sehte Hai.”

21-years-old, Burhan raps in Kashmiri, Urdu, Punjabi and English and made number of tracks Kasheer, Awaam, Kafir, Talks and much more.

His journey from Burhan to Thugflow started in 2019 when he started performing at various events in the valley. In the meantime, he produced his debut track "Kasheer" in which he highlighted the evils within society.

He said, “To be honest I have been inspired by each and every hardship I faced in life other than that, Roger David (Bohemia) has been my inspiration.”

To him, Hip Hop is inner peace and solace. “Every word I write is what I have been through and I am just a mirror to the society. People see themselves in every word of mine. Hip hop is about stories of one’s own sufferings,” he said.

Burhan is currently pursuing Bachelors in Business Administration from University of Kashmir. He enjoys full support of his family.

He said that the scenario of hip hop in Kashmir is people misjudge the artists. He said, “They term us as drug addicts, muggers etc. it’s because some people have been promoting bad things through their songs which hip hop oppose. Hip hop is a powerful art of presenting feelings, emotions and observations”

From breakups to religion, Burhan has touched every aspect of life. His songs reflect his own observations and write verses that are relatable to everyone. In one of his songs, Talks, he has called out men for their hypocrisy in treating women differently, Thugflow sings, “Ghar pe hai behan aur Bahar Ganda Zehan.”

The song Fitoor released in 2021 talks about the unheard voice of the people, who encounters stereotypes of the society and want to break chains to live freely.

Talking about his techniques of songs, he said, “Give me a good beat and watch me murder it.”