While the valley youth struggle to gain access to government positions, entrepreneurship is an alternative that they are pursuing. Female entrepreneurs have been making inroads into the business world in the valley over the last few years. 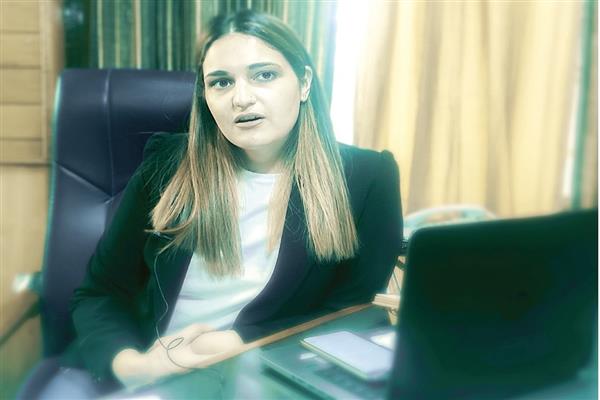 I did not inherit the position where I am today, rather I earned after I strived for it over the years, said Faeiza Qayoom who joined her father’s business way back in 2016 when she was 23 years old and a fresh management pass out from a top university in England.

For many Kashmiri females, starting their own business is the manifestation of their dreams, but seeing those dreams coming true often remains a diminishing dream for them, while few make it to the realities.

With trade bodies in the valley saying that over the past two years after facing three back-to-back lockdowns and shutdowns, the valley trade and business has suffered a loss of around Rs 50,000 Crore. With this big dent in the economy, taking it to a ventilating mode, the scope for setting up a new business or making an existing business stand is like a herculean task for the business stakeholders in the valley.

Shutdowns and curfews frequently put life and business on hold. Setting up a new business can be risky for anyone, but the challenges are multiplied for women, who must contend with conventional conventions regarding their position in the workplace. Despite this, a new generation of female entrepreneurs is breaking down barriers and launching their own firms.

Faeiza Qayoom from Srinagar, a management pass out from an overseas university, in England had dreams of going into the fashion designing industry, but back in 2016 when she came back to the valley to see her parents, she started helping her father in his concrete cement pipes and blocks manufacturing unit. What seemed to be a new beginning for Faeiza she never thought of switching the manifestation of dreams she dreamed of going into fashion designing. Faeiza who now works as a Managing Director for the Company, owned by his father, the position which she believes, is not inherited, but earned over the years in the company after joining as a fresh entrant, after her father posed trust on her as successor to carry forward the legacy, the father who acted like a mentor, a boss and simultaneously a parent as well.

Faeiza said, working in a male dominant society was never easy for me, even our staff at the firm started refusing to work under a Female Boss, although I never acted like a boss, I joined my business as a learner and always possessed flexibility to learn.

“I was taken aback the way people around my own business started refusing me, just because I was a female, but that did not deter me from doing my work, rather it drove a good motivation in me and with the time I started learning, and bridged the communication gaps between me and my staff,” she said.

Faeiza after being in business from around six years now, heads two separate business establishments of the same manufacturing nature and also heads around 200 employees both on the company pay rolls and on daily base needs.

Faeiza who now plans to expand her father’s business to the next level in a modified structural model which she says is still under the research work.

While Faeiza believes that women are dominated by men in every field and their decisions are often influenced by them, resulting in limited mobility for the women folk, she says women folk have to come forward and start exploring the options, and not just confine themselves to limited options.


While the empowerment of women is one of the most talked about ideas in India. But the road towards the goal is pebbled.

In the recent few decades, an increasing number of Kashmiri women have chosen work or entrepreneurship as their initial steps toward a career. Although the government claims that women's empowerment is a key priority, it has never conducted comprehensive research on gender economics in a place as industrially backward as Kashmir.

Faeiza termed her initial phase at work very challenging and said, there was less support from the staff as they were not ready to accept a female boss which I wasn’t, rather I came as a learner, while recalling an incident, Faeiza said a manager of our firm who refused to comply after I passed a direction, he straight away called my father and said to him, he can’t work and cannot accept the directions from me.

“I sometimes cried, but I never gave up and I believed in myself and wanted to come up to the expectations of my father and never wanted to let him down”, she said.

Abdul Qayoom, father of Faeiza, considers himself the luckiest one and is satisfied after his daughter took over certain segments of the business. Qayoom while speaking with Rising Kashmir said that today he feels a proud father, I had made myself mentally ready to accommodate Faeiza in my business so that the legacy is taken forward, and with her joining my business got more success.

“I had to balance, I had to act as a mentor, a boss and a parent, and wherever I felt she needed guidance I did that, and I am lucky to have a daughter like her who never argued, and just became a good listener and learner. Today, I am free whenever I wish to go to the factory. I relax a lot now, spend time with friends and family, as I have my proud daughter alongside me now”, he said.

While talking about the family support, Faeiza said, “my parents have been supportive throughout the time, even when I was just 18 years old and was in England, I thought of coming back to home, and my father said to me you have to learn to live, and have to be tough, which rather made me strong and today I am running a business empire.”

While talking about women empowerment, Faeiza says, the women folk go for entrepreneurship and can create employment for others. This is not confined to limited sectors, but pitches for exploration of more avenues, and in the present era women have to be independent, not just always rely on others. One has to start, even if there will be losses, or one may see people getting successful in business within a year, but that does not mean, you can do the same and see the same results, all it needs is commitment, dedication and belief in self to prove yourself.

“It is our generation’s responsibility to end this social bias, I know there is social bias between men and women, as people think men can do this and women can’t”, she said.

While sharing her observations, Faeiza says that girls started facing the challenges starting from the families after they get a refusal for working or starting some business avenue, which rather becomes a big discouragement for them for the whole life. However, I feel the perception has to be changed and families should put trust in their daughters or sisters and encourage them if they are up to something which is good for them as far as their career is concerned. Though everyone has their own limits, parents should be supportive, if their children, especially girls are up to something which is positive for them.

“Failure is not a shame, if one doesn’t get a job, it doesn’t mean one sits back at home and cries, there are options available which one needs to explore with due consultations from elders and of course with the support of parents,” she says.

Likewise, Faeiza, Munaaza Touseef who also had a dream of setting up a business in the valley, despite holding a government job which she left in the year 2014 after she got married in the same year.

Munaaza who started the organic business of skin and hair care products with a range of more than 30 products has been in the market for more than two years now.

While speaking with the Rising Kashmir, she said that after she left the government job, she pursued an online training course from an institute in England.

“Taking a call on quitting the government job was never easy, but my family and especially my husband has been my strength throughout, who encouraged me to start the business. Currently, apart from local clientele, I also have clients from different parts of India and recently I got the overseas orders from Dubai and Bangladesh”, she said.

Apart from being self-reliant, she also generates employment for others and has employed four female employees, which are trained now on making the formulation of products.

Qazi Touseef, husband of Munaaza who is also in a chain of businesses told Rising Kashmir that, he is satisfied with the business his wife is doing and most of the marketing work required is taken care by me, wherever she needs the support to expand the business, he said, “I am always there for her”.

However, the band wagon of female entrepreneurs does not stop here only. Like Faeiza and Munaaza, there are many women folk who are coming forward to set their business.